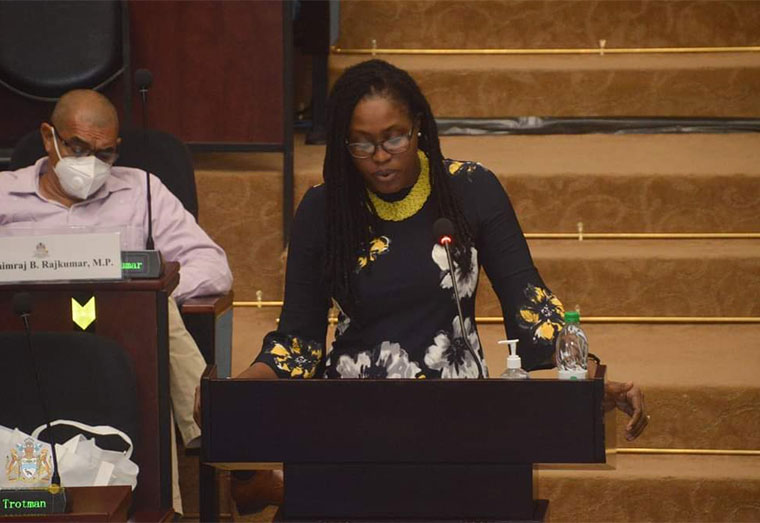 Opposition Member of Parliament Tabitha Sarabo-Halley said after more than a year of mismanaging Guyana’s financial resources, the People’s Progressive Party/Civic (PPP/C) Administration, in its quest to get access to the Natural Resources Fund, rammed the Natural Resources Fund Bill through the National Assembly to finance the 2022 National Budget.

For 2022, the Budget is pegged at $552.9B. However, approximately $126B will come from Guyana’s Natural Resources Fund. “Mr. Speaker, the PPP regime has given away so many tax concessions to their cronies and borrowed so much that our current non-oil budget is $6B less than it was last year. Now it becomes clear why they rushed to pass and assent to the Natural Resource Fund Bill of 2021 which the majority of Guyanese believe was illegally passed…,” MP Sarabo-Halley told the National Assembly as the budget debates continued on Tuesday.
The A Partnership for National Unity + Alliance For Change (APNU+AFC) Member of Parliament said for the Government to sit and boast about the $552.9B Budget being the largest ever when a large section of the population is left to suffer due to its “poor attempt at governance,” is simply “ludicrous.”
“Mr. Speaker, while they come here and boast about the largest budget, the Guyanese people have to endure, inflation, high cost of living, high youth unemployment, extrajudicial killings, blackouts, load shedding, blackouts, load shedding, plenty more blackouts and lots of load shedding, then Mr. Speaker there is no water, low water or if you are lucky to get water, it’s gray water, brown water or reddish water like the new $2000 bill,” MP Sarabo-Halley told the House.
MP Sarabo-Halley, who served as Minister of Public Service under the David Granger Administration, said Guyanese are suffering at the hands of a single individual – a man – whose scope, in dictating to the Government, is limited to corruption, nepotism, racism, bullyism and narcissism.

For the record, the Opposition MP said that as far as the APNU+AFC Members are concerned the Natural Resources Fund Act was illegally passed. That aside, she said the PPP/C Administration has already failed to abide by its own law, as she referenced to Section 16 (2) of the NRF Act, which states: “(a) All withdrawals from the Fund shall be deposited into the consolidated fund and shall be used only to financeNational development priorities including any initiative aimed at realizing an inclusive green economy and(b) Essential projects that are directly related to ameliorating the effect of a major natural disaster.”
MP Sarabo-Halley said legislation expects any government to clearly identify the national development priorities that require the resources of the Fund, but the PPP/C Government has failed to do so thus far.

“Instead what we are seeing in this budget is a line item under Table 2a, 2 b and Table 4 which show that the full $126.6B will be withdrawn from the NRF. This is unacceptable and must be corrected,” she said.
Maintaining that the Natural Resources Fund Act is illegal, the Opposition MP said the exclusion of Guyanese in the decision making process, with respect to consultation, should be seen a major red flag. “Why would you negate any form of consultative process with the stakeholders,” she questioned.
PUBLIC SERVICE
Turning her attention to the Public Service, MP Sarabo-Halley said it is farcical for the Government to bring the its third budget to this House with little to no focus on developing or improving the public sector.
She said it would appear that the Public Service Ministry is a shell Ministry, or that the Administration lacks confidence in the Minister of Public Service Sonia Parag. MP Sarabo-Halley said it would it appear that the Education Ministry has hijacked the GOAL Project,for which the Public Service Ministry was integrally involved in.
“At this juncture I am perplexed as to what the Hon. Minister and her Ministry has been doing or according to this budget is planning to do for 2022,” she posited.

MP Sarabo-Halley said while the issuance of scholarships is an important, it is expected that the beneficiaries, upon the completion of their programmes would enter the public service, utilizing their new skills and knowledge to advance the country’s Public Service, but this, she said is not required under the GOAL initiative. “Even public servants who are GOAL Scholarship recipients can choose after completing their program to leave the public service,” she posited while questioning the rationale behind investing so much time in marketing the programme when it is likely to have little impact on the Public Service.
Further, she said Budget 2022 offers little hope for the public servants.
“Inflation has not only swallowed up whatever tax threshold increase is being touted but the 7% increase and the bonuses that persons received last year. The public servant who is earning minimum wage would receive a monthly salary increase of a mere $4900 while the president who is earning $2 million dollars plus will be receiving a $150,000 increase. Worse still, is that the minimum wage earners must pay taxes on their salary increase while the president will not. This stark contradiction highlights the major difference between the APNU+AFC coalition and the PPP,” she told the House

Tue Feb 1 , 2022
Support Village Voice News With a Donation of Your Choice. Twenty-eight-year-old Lester Leander, a miner of Lot 337 Wisroc Housing Scheme, Wismar Linden was on Tuesday sentenced to three years imprisonment for the offense of setting fire to a dwelling house, when he appeared before Magistrate Wanda Fortune at the Linden Magistrate’s Court via Zoom. Leander was arrested on 2022-01-29 […] 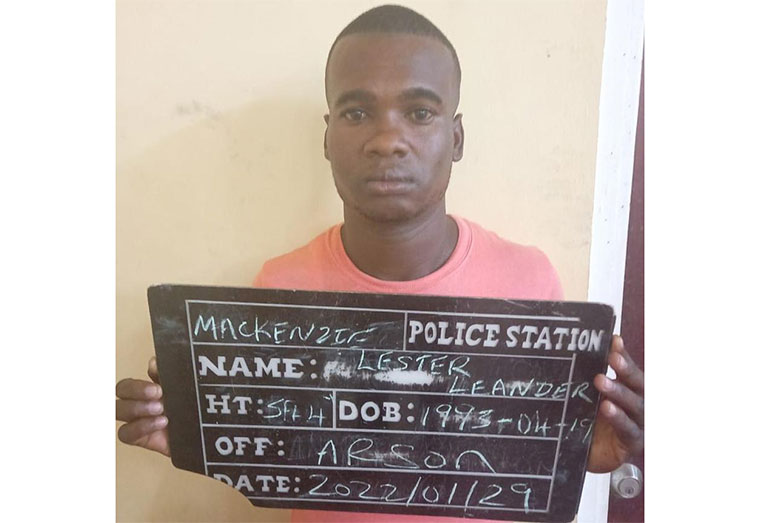