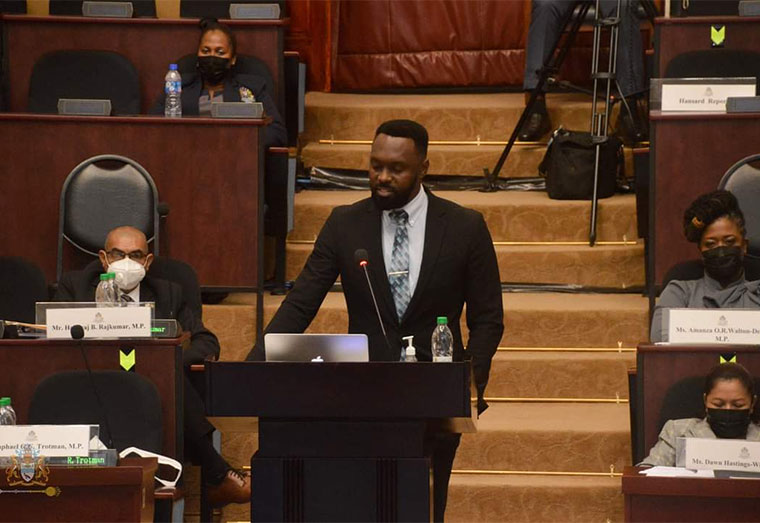 Opposition Chief Whip Christopher Jones said the $552.9B Budget presented by the People’s Progressive Party/Civic (PPP/C) Administration is an insult to Guyanese, particularly the poor and working classing.

Dubbing it a “disrespectful budget,” Jones told the National Assembly on Monday that the budget, which increases Government’s spending by more than 40%, will only add to the current steady rise in the cost of living on poor Guyanese.

“The Budget is full of big, bold promises and spending but it is very obvious how little it caters to the working [class] and poor. Given that this will be the first budget to directly include oil revenues we are deeply disappointed in how these self-proclaimed builders of Guyana have once again shown utter disregard for the average Guyanese, hiding behind fancy rhetoric, baseless projects and in plain and simple terms Untruth,” he told the House during Day One of the Budgetary Debate.

Jones questioned how could Guyana have the fastest growing economy in the world with an income tax threshold of $75,000. Government has proposed to increase the income tax threshold $65,000 to $75,000 but the Opposition Chief Whip told the National Assembly that such meager increase is simply unacceptable. It was noted that the country’s lowest income workers will only benefit from $2,8000 more.

Jones questioned: “If prices on some food items are doubling, shouldn’t the tax threshold respond to this?”

He also bemoaned Government’s neglect for the University of Guyana, and its students. “How can it be that in a budget that has massively increased, the funding to the University of Guyana has remained almost the same, in the middle of a pandemic too! In fact, the nation is spending a far smaller portion of its budget on the University now, while they try to distract us with these GOAL scholarships,” he said.

Underscoring the importance of a university degree, the Opposition Chief Whip urged the National Assembly not to close off this opportunity from the lowest income families, who may not be able to take out a loan. In doing so, he renewed calls by A Partnership for National Unity + Alliance For Change (APNU+AFC) for the University of Guyana to be made free immediately, and for students to receive a stipend that can assist with expenses such as internet, accommodation and travel.

“My Good Sir, it was during the Elections campaign we saw on almost every lamp poles poster saying University will be Free we also saw ones that read 50% increase in wages & salaries but apparently this was a figment of our imagined as it was photoshopped!! I will assume in the near future we will be told that the one which read University of Guyana will FREE was typo too,” he said.

Turning his attention to the Sugar Industry, the Opposition Chief Whip told the House that Government intends to inject another $6B into the Guyana Sugar Corporation (GuySuCo), though it continues to underperform.

He said while billions are being injected into the failing Sugar Industry, pensioners are left to suffer at a time when cost of living has skyrocketed.

“It is disrespectful to the Pensioners of this country Sir; these are the people on whom shoulders we stand on, who laid the foundation of this country and now Sir, after their labour, this cooperative Oil Producing Nation we give our pensioners $3,000 dollars!!!! Its the disrespect for me Sir!”

“What is even worse Sir, is that they are pensioners in this House, such Hon. Members Robeson Benn, PM. Mark Phillips, Joseph Hamilton, Gail Teixeira and others who I am sure would not be affected by the $2,436 because they are far far removed from the reality of the people of this country!!” he submitted.

He added that the budget offers little or nothing to the country’s public servants, noting that the 7% increased offer towards the latter part of 2021 is simply not adequate.

Jones submitted further that the budget offers little for the young people of Guyana, who account for approximately 36% of the population. He contended that the sum allocated for youth is paltry, and in reality, it’s a sad excuse for an allocation.

He said the majority if not all of the projects executed under the Ministry of Culture Youth and Sports over the last two years were initiated by the APNU+AFC Administration, under his watch as Director of Sports.

He pointed out that the Synthetic Tracks in Region 6 and 10, the multi-purpose sports facilities in Regions 2, 6 and 10 and the community ground enhancement projects were all initiated under the APNU+AFC Administration. He queried further about the status of the much talked about Sports Policy, Cultural Policy and the Youth Policy.

He reminded the House that Article 13 of the Constitution guarantees Guyanese the basic fundamental right to participate in the decision-making processes of the State, and that should not be compromised

OP-ED | Norton weathering the storm in face of provocation

Tue Feb 1 , 2022
Support Village Voice News With a Donation of Your Choice. By GHK Lall I note something strange happening right before our eyes.  It confirms that adage of the silver lining behind the storm clouds.  And when I trace and touch the silver lining, there is some reassurance of maturity, good sense, and the soberness that leads to temperate words and […]