I note something strange happening right before our eyes.  It confirms that adage of the silver lining behind the storm clouds.  And when I trace and touch the silver lining, there is some reassurance of maturity, good sense, and the soberness that leads to temperate words and postures, measured steps.  Believe it or not, it has to do with the new PNCR leader, Mr. Aubrey Norton.

In the face of what some would consider the extremely provocative, he has held his ground and his tongue.  It is of man on his ps and qs, and one taking great care in minding his manners.  It is impressive how he has reacted to the difficult circumstances with which he has had to deal, the surprising leadership hand-the first one-that he has been dealt.  I am impressed.  I say this because he has not been given a free nor fair first playing hand, the necessary unfettered leeway to leverage his new leadership mantle.  Yet, he has been the essence of cool, which has caught many by surprise, including me.  He has shown what he is capable of in a crunch, which should go a long way in neutralizing detractors and naysayers, as he works with what he has been given, while engaging in what must be this long game, a waiting one.  He has exemplified all this, despite being hindered from implementing his programme to reinject some spirit and strengthen to the party, with a view to advancing that on the wider national stage.

While I hold no brief for him, I think that this spells well for the future, both his and Guyana’s also.  The thinking in many circles is that he would be one dimensional, a party man and not much more.  I believe that what Mr. Norton has manifested to this point is that he is a thinking man, a patient and resourceful one.  Many had envisioned in the new PNCR leader a rough rider in the Teddy Roosevelt tradition; one who would bulldoze his way over those standing in his way.  I sense that he is keeping his powder dry for the right occasions, and those who have failed to have the interests of Guyanese at heart.  We shall see.

My visions of him are that of a man, a Guyanese who hurts with the agonies of those growing number of citizens, who are injured by the oil deceptions and practices of leaders of the current government, as well as their divisive and self-serving agendas.  As this is said, Mr. Norton must be made aware from this early hour that I expect much of him, will demand more of him, and will measure him accordingly.  He must neither wilt nor fade in the crucibles that stretch before him.  This, too, he must know: it is that he will be treated as fairly, as honestly, as I have dealt with incumbent President Ali, Former President Granger, Former PNCR leader Harmon, and the Former President who is the current Vice President in the present PPPC Government.  It is hoped that my fellow Guyanese would have discerned (and appreciated) that of all the national office named and the people identified by name, I have not mentioned the Vice President by name. That alone should convey the state of the regard I have for him, the degree of personal besmirchment that I seek to avoid by limiting myself to the mere mention of his office.
I offer these powerful offices and notable Guyanese as the first examples to Mr. Norton, and particularly the last one, as a reflection of my utter distaste for where things could go wrong, and did.  To emphasize of how I have been, of what I don’t want to do, but where I must go when circumstances leave no choice.  The circumstances before oil and now with this accursed oil, which have unfolded time and again, and with the most destructive damages to the nation’s psyche at the hands of its leaders.  It is what dictates how I must be, regardless of who is the one faltering.

It is why this effort has been placed before the Guyanese public.  Before Mr. Norton.  Expectations are high that he can rise to the occasion and the embedded challenges.  In the internal political arena, he has shown himself to be a statesman, who has caught many off guard, despite the hijacking of his time and role.  He must refine that for the countless hurdles before him in the national realm.  Time will confirm if he is up to what is before him, which he approaches from the starting line with an added albatross hanging around his neck.  This one is if something like party leadership can’t be gotten right, the prospects are gloomy on getting the demands of national leadership right.  He will be reminded endlessly and be made to pay for the transgressions of others, his comrades with whom he has to work.  Still, he must be undaunted, for he is the one handed the chalice.

Because of how well Mr. Norton has handled himself in the throes of leadership disputes, and the leadership that he has earned, and is his due, I think that there is more to the man than meets the eye.  He just could be the man to go eyeball to eyeball first with leaders in the PPPC Government, next with those of Exxon Guyana, and last with the powers of Exxon America.  Aubrey Norton has my best wishes.  I give to him what was given to all those leaders whose names (except one) were mentioned earlier: he has time, room, and opportunity to make good.  He must deliver.  He must not fail, because Guyana has no other.  Not the President.  Not the Vice President.  Not the Former PNCR leader.  Not those fly by night new political parties.  Not civil society.  He must rise up and deliver for all Guyanese.  I would hate that the work of his hands, and resulting circumstances compel me to go down a separate road.

Ramjattan warns against heavy reliance on the Oil & Gas Sector

Tue Feb 1 , 2022
Support Village Voice News With a Donation of Your Choice. By Svetlana Marshall Leader of the Alliance For Change (AFC), Khemraj Ramjattan said the 2022 National Budget sends a daunting message that under the People’s Progressive Party/Civic (PPP/C) Administration, Guyana’s economy will become overly reliant on the Oil and Gas Industry much to the detriment of other critical sectors. “This […] 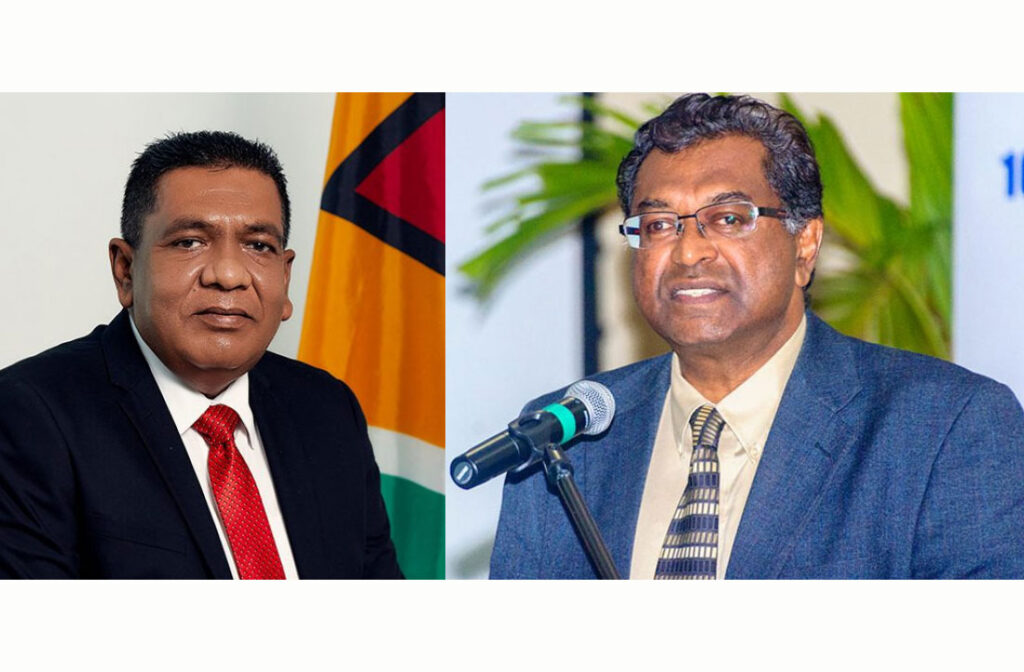