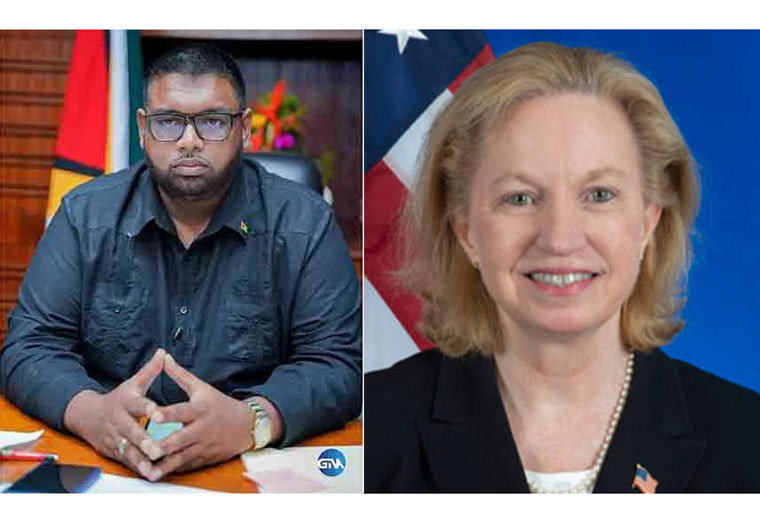 “We the People,” whether it be choosing to build roads and bridges, create policies that encourage equitable economic prosperity, provide access to clean drinking water, or provide education that uplifts all citizens, democracy and access to free and fair elections gives every citizen the power to be inspired and participate in the collective quest for a perfect nation,” the US stated.

Amid growing concerns about the lack of public participation in the formulation and eventual passage of the Natural Resources Fund (NRF) Bill, the US Embassy here has stressed the need for the involvement of citizens in the decision-making process especially on projects and initiatives that that will affect their lives.

Although not stating directly, the embassy’s statement seems to be aimed at the Irfaan Ali Government that has come under widespread condemnation for ramming through Parliament a flawed Natural Resources Bill and then speedily signing it into law. The government has also been accused of going solo on several other crucial national initiatives including its shutting out of the opposition in the country’s response to the Covid-19 crisis that has seen in recent days an alarming rise in new cases and hospitalisations.

Regarding the NRF several civil society groups and individuals have bemoaned the lack of consultations on the legislation, which gives government unrestricted access to the oil fund. Already President Ali has signaled his government’s intention to use the money in the account and his Finance Minister, Dr Ashni Singh has already signed the official Order, bringing the Act into operation.

In a statement on its Facebook page titled “We the people”, the US Embassy said: “Democracy empowers the strengthening of national unity and national culture for every citizen and can be used to help guide the government in choosing priorities that best serve the people. “We the people” serve as a cornerstone to democracy and are essential in forging a system of governance that promotes broad-based participation from every citizen.

“We the People,” whether it be choosing to build roads and bridges, create policies that encourage equitable economic prosperity, provide access to clean drinking water, or provide education that uplifts all citizens, democracy and access to free and fair elections gives every citizen the power to be inspired and participate in the collective quest for a perfect nation,” the US stated.

On last week new civil society group, Article 13 said it was time that the PPP/C Administration respects the rights of citizens and groups not only as a legal construct but also asone of good governance. “Civil society organisationsplay a pivotal role in good governance, linkinggovernments with the people, thereby enhancing the quality of decisions and decision-making. While a single election may grant power to a political group for the administration of the State, such power has to be exercised within the parameters of the law, of which the Constitution is supreme,” Article 13 said in a statement.

The body said in rejecting the recommendations and calls of the parliamentary opposition and civil society to be consulted on some of the biggest issues of the day, the Irfaan-Ali administration isrejecting a core concept of our Constitution and of democracy. “Guyana’s sovereignty belongs to the people, not to any political party. Guyana’s wealth too, belongs to
the people, not to any political party. We elect governments to managethe country’s resources in the interest of both current and succeeding generations. When theGovernment fails to act in accordance with that mandate,the fundamental trust and confidence that hold our society together are at best strained,and at worst,rendered asunder,” the group stated.

“As a civil society organisation, it would be remiss of Article 13if it does not speak up when our politicians act outside of the letter and spirt of the Constitution. In the short space of seventeen months, the Ali Administration is chalking up a formidable list of constitutional violations of omissions and commission. What makes those violations worse isthe Administration’s cavalier disregard of legitimate calls for it to avoid suchconduct. We remind the President that his Party did not take an Oath to uphold the Constitution –he did. The violations then are his, not his Party’s.”

Article 13 said it considers it a duty to register, in the strongest possible terms, “our disappointment at the undue haste with which the Government rushed through Parliament theNatural Resources FundAct which opens the door for misuse and without regard for the Santiago Principles which set out the basic tenets of such Funds. We consider it a salutary lesson that Kazakhstan, whose model of Sovereign Wealth Fund was being considered as a potential influence for Guyana’s, is now experiencing unprecedented disturbances, loss of lives, looting of private property, destruction of public property, and orders by the President to domestic and invited Russian troops to shoot to kill protesters without warning,” the statement added.

Not a single consultation
Meanwhile, Policy Forum Guyana another civil society group that had submitted a petition to Parliament calling for a delay in the passage of the bill to allow for wide consultation said as background to the “PPP/C indefensibly forcing of the Bill through Parliament, it should be borne in mind that not a single consultative process has been conducted by the ruling PPP/C on the new Act, despite its far-reaching consequences, despite civic opposition and despite having a one-seat majority in Parliament.” The group added: “Nor, in the same vein, can the ruling party claim any ownership of the widespread consultations that preceded passage of the original NRF Act which they systematically boycotted.”

Policy Forum Guyana said, the failure to consult on the new Act is the most egregious violation of the expectation for consultation implied in Article 13 of the national Constitution. “Much less than consult, not a single article, debate or discussion was made available to defend or explain the intended legislation, introduced to coincide with the Christmas and New Year festivities. This silence was maintained in Parliament since the presentation by the Minister focused entirely on the weaknesses of the Act he was replacing without a single reference to the content with which he was replacing it.”

According to the body, since assuming office in 2020, avenues for influencing decision-making in Guyanese politics have been progressively closed off by the ruling party. “Independent voices are being silenced and professionals replaced by compliant camp-followers. As a result, institutions such as the Environmental Protection Agency (EPA), the Guyana Police Force and the State media, while ostensibly still performing their roles, have become arms of the ruling party. In the same vein, the dismissive Parliamentary treatment of the formal Petition signed by 64 citizens calling for a pause in the consideration of the Natural Resources Act (Amendment) Bill 20 of 2021 is a microcosm of what politics in Guyana has become. An entirely transparent process making a modest demand for time to consult was ignored by the ruling party without explanation.”

The group said despite weak Press interest, the Petition served to stimulate similar calls for consultation from other civic groups and major business organisations. “Resistance to its continuance was sufficiently broad-based that the call in the Petition for the Bill to be sent to a Select Parliamentary Committee would have provided an elegant way out for the ruling party. It would have been a temporary concession made to the wishes of the people, not the demands of the opposition APNU. No less than the APNU, however, the ruling party strategy preferred to rely on power rather than politics.”

Shortage of nurses at GPHC

Sun Jan 16 , 2022
Support Village Voice News With a Donation of Your Choice. …night shifts almost left bare as nurses, doctors fall ill with COVID, report sick —RN says: “We have the gear but we just don’t have the human resources” By Svetlana Marshall At least seven units within the Georgetown Public Hospital (GPHC) are reportedly hard-hit by the COVID-19 pandemic, with many […] 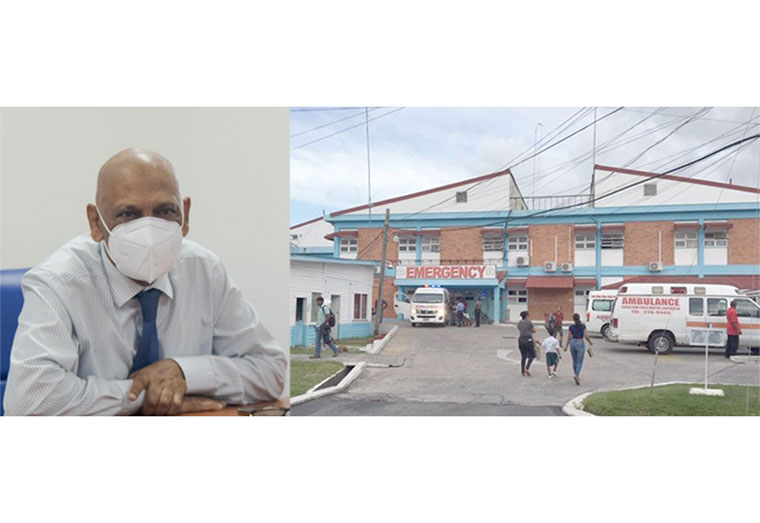