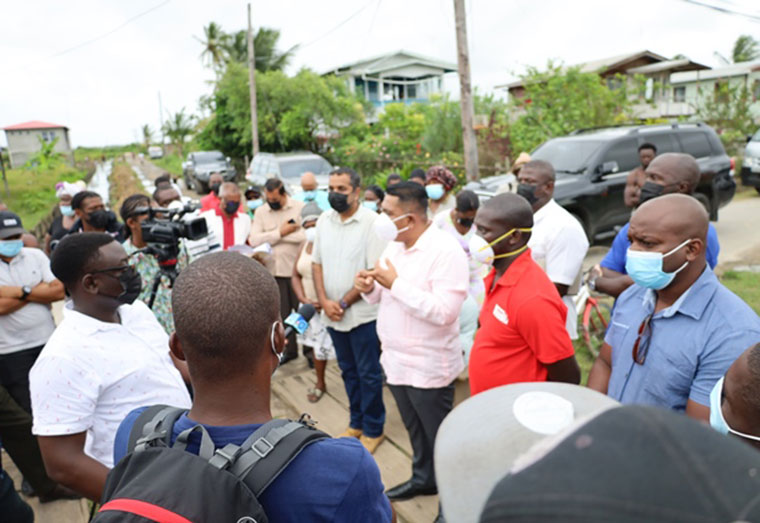 Farmers from Victoria Village, a farming community located on the East Coast of Demerara, will soon benefit from much needed drainage works following years of neglect and underdevelopment, the Ministry of Agriculture has said.

Twenty-three of those years the PPP/C government were in office. During a meeting on Wednesday afternoon with the farmers after they had lodged complaints about the seeming neglect, Agriculture Minister, Zulfikar Mustapha told them that most of their drainage woes will soon be behind them in the coming week as emergency works will commence within the next three to five days.

Farmers from the community turned up in their numbers to meet the minister, airing their dissatisfaction with the lack of proper drainage thus resulting in their farms being completely inundated when there are instances of persistent rainfall. One farmer explained that due to the heavy vegetation in the trenches, many farms are constantly underwater.

“Most of the trenches are blocked up and that’s causing flooding. All through the year, we experience flooding. Every time we go back to the farm we’re flooded again. We need good drainage,” the farmer said. Similarly, another farmer told the minister that the main relief channel in the area, which also drains three other neighbouring villages, is blocked and needs to be cleared.

“We have a company trench out there. The main drainage trench for Victoria and Cove and John, also Nabacalis and Golden Grove. That one trench drains everything. That is the most important trench and its blocked up,” the farmer said.

Aside from drainage, farmers also said that there was a need for a ranger to manage the crown dam. One farmer related that in the past, a ranger would monitor the condition of the dam and provide a report to the relevant authorities. “We need a ranger because when the rainfall they are opening the kokar. Years ago when the water drop in this village then they’d release the water from the savannah. If you go there right now, when the water big, it could work but the wire rope isn’t good and that is the main thing that is causing flooding in this village now. The crown dam leaking in several places and nobody’s getting to report the matter because we don’t have a ranger. Years ago, we had a ranger that used to run the crown dam and bring in a report but now we have no ranger and the system stop,” the farmer said.

In addition to drainage issues, the visibly frustrated residents expressed dissatisfaction with the performance of the village’s Neighbourhood Democratic Council. They told the minister that despite making numerous requests for upgrades to their roads and cleaning of their parapets the NDC continues to ignore their requests.

While addressing the farmers’ concerns, Minister Mustapha said that emergency drainage works will commence in the coming days. He added that as the rainy season is expected to last another two months, works have to be prioritized to minimize flooding in the community.

“Things that were not don’t for years cannot be done all at once. We have to prioritize and determine what works should be done now and what should be done later. What is most important should be done now. We are now experiencing heavy rainfall because the prediction is showing over the next two months we’ll have heavy and intense rainfall. We have to prepare now so that farmers and residents who suffered tremendous losses will not experience that again. Systems need to be put in place. Although we are approaching the end of the year, which means our 2021 budget cycle is coming to a close, in another three to five days I will ensure that a machine comes to commence emergency works in the area. We’ll do the company trench, the two sidelines, and the middle walk. Those four trenches we’ll do this year for you. Those areas that have breaches, the machine will also seal those breaches and as it excavates, it will build the dams so that we can prevent flooding,” Minister Mustapha said.

In addition to the emergency drainage works announced, Minister Mustapha also told residents that officers from the National Agriculture Research and Extension Institute (NAREI) will also be conducting a needs assessment to determine how many farmers suffered losses, after which, the ministry will be able to make available planting materials and fertilizers so that farmers can return to the land as soon as possible. Furthermore, farmers who lost livestock were also assured that, following a similar assessment, the ministry will work to offer assistance to farmers who suffered losses.

After the meeting, Minister Mustapha walked with farmers to get a first-hand look at the devastation caused by the flooding as well as the state of the roads. Residents took the opportunity to express satisfaction with the Minister’s visit and his willingness to visit several of the affected farms and homes. One resident mentioned that following the passage of the no confidence motion, the former Junior Minister of Public Infrastructure had visited the area but instead of walking with residents engaged them from the comfort of her vehicle.

Minister Mustapha also told farmers that come 2022, farmers can look forward to more developmental works in the village. He also said that he will engage the Ministers of Public Works to visit the area to address issues with the roadways in the village.

Sat Dec 25 , 2021
Support Village Voice News With a Donation of Your Choice. She may not be ‘Santa Claus’ or ‘Mrs. Claus’ but for some, Simona Broomes, is a God sent child, who not only spreads cheer at Christmas, through acts of good will, but all year round. “I know of Ms. Broomes from reading about her but, God sent her to me […]