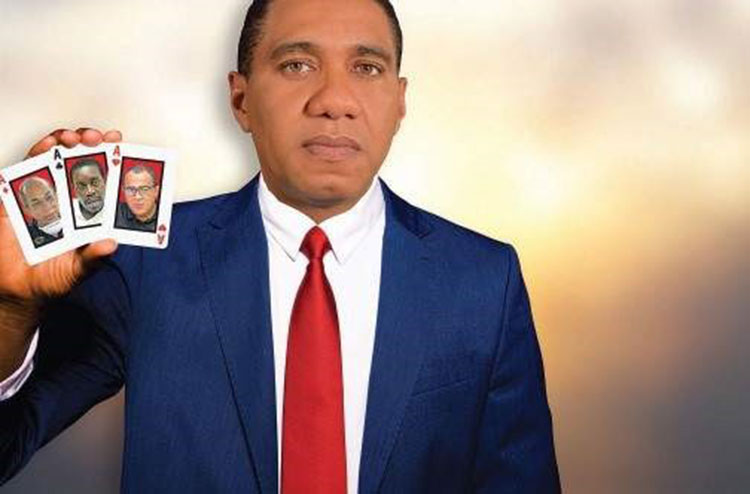 (JAMAICA OBSERVER) Christopher Tufton, the minister with responsibility for health and wellness has emerged among political watchers as the most likely to be reassigned when Prime Minister Andrew Holness shuffles his Cabinet early next year.

Political watchers yesterday zoomed in on Tufton’s ministry and the Ministry of National Security following confirmation from Holness that a shuffle of his Cabinet is looming.

For weeks there have been whispers of a pending reassignment of ministers, and yesterday Holness confirmed that the changes were coming, 15 months after his party was elected for a second term in Government.

According to Holness, a revamp of his Government is likely, but he would not give a timeline just yet.

“It is necessary and, like any other organisation, you have to look at the horizon, see what is coming, look at your current situation, your current deployment of your human resources, and figure out how to change that to be able to respond to what is coming on the horizon,” Holness said in response to questions from veteran journalist Cliff Hughes on Nationwide News Network yesterday.

“We have been doing that as a Cabinet,” added Holness, who also indicated on the radio programme that the local government elections due in February next year could be further delayed.

Minutes after Holness ended his interview with Hughes, the speculation started with one Jamaica Observer source close to the Administration willing to bet his house that the first shift would be Dr Tufton.

“It is clear the Chris is being led astray by the technocrats and it is obvious that the PM will move him to an area where he has more expertise, like industry and commerce,” said the source.

That opinion was shared by another source close to the Administration who claimed that there had been a number of foul-ups in the management of the COVID-19 crisis by the health ministry which had angered Holness.

“There is no question that Chris will be shifted, but the problem the PM will face is that the right man for the job in the health ministry is Dr Horace Chang, and the question is whether the PM will want to move the deputy PM from that post, even though he has a capable understudy in Matthew Samuda,” added the second source.

“That would mean a move in the two ministries which could cost the JLP the next election, but Chang in health and Samuda in charge of security could work,” the source argued.

Robert Montague could also find himself shifted, based on the number of questionable incidents under his portfolio, but after trying him at national security, agriculture, and his present portfolio of transport and mining, Holness could be forced to keep the powerful party chairman in his current post. Holness could also use the shuffle to say goodbye to veterans Karl Samuda, who is in charge of the labour and social security ministry; and Audley Shaw, who recently had agriculture and fisheries added to his industry and commerce portfolio. “It’s uncertain as to what will happen to the education portfolio, which is key to the PM based on his history, but recent missteps by the minister, Fayval Williams, could see her in trouble, although I expect the PM will hang on to her,” said the source who added that Attorney General Marlene Malahoo Forte could be shifted to the Ministry of Justice with Delroy Chuck being reassigned.

“I expect the PM to announce the changes early in the new year because it is clear that he has been working on it for some time and had it not been for the Christmas holiday the changes would have been announced already,” declared one source.

Sat Dec 25 , 2021
Support Village Voice News With a Donation of Your Choice. (BBC NEWS) Millions of people are facing travel disruption and increased Covid restrictions over Christmas, as the surging Omicron variant sees safety curbs tightened and flights cancelled. Italy, Spain and Greece have made face masks compulsory outdoors again. Catalonia, in northern Spain, has imposed an overnight curfew, and the Netherlands […]