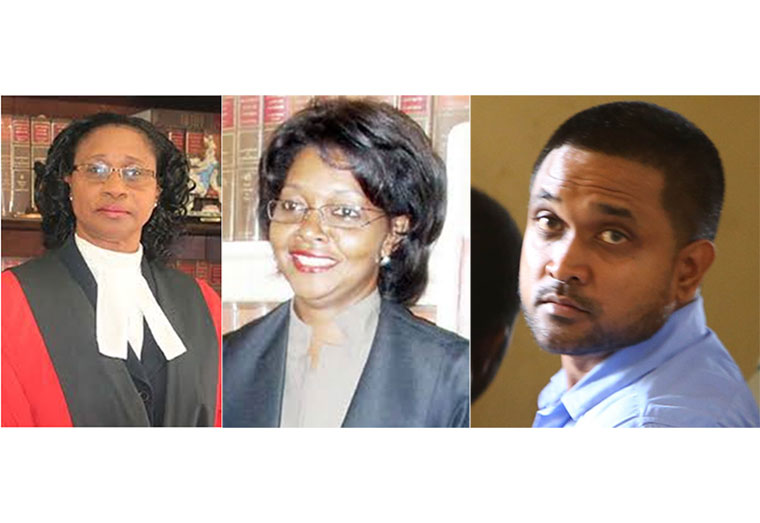 …after Court of  Appeal decision to hear election petition case

Local Government Minister, Nigel Dharamlall has publicly called for dismissal of Chancellor of the Judiciary, Yonette Cummings and Justice Dawn Gregory.
Dharamlall’s statement is the most frontal from a sitting government minister, although recently Attorney General, Anil Nandlall had made scathing comments about the judiciary.
“Same two judges who ruled that 33 is not the majority of 65. Their bias is obvious. They should be defrocked. Luckily, the Caribbean Court of Justice is our final apex court,” Dharamlall wrote on his Facebook page.

The Court of Appeal, in a majority decision, ruled that it has jurisdiction to hear an appeal challenging the High Court’s decision to nullify Election Petition 99 over noncompliance of service.

Chancellor of the Judiciary (ag) Yonette Cummings-Edwards headed down the decision on Tuesday alongside Justices of Appeal Dawn Gregory and Rishi Persaud in the case – Monica Thomas and Brennan Nurse v the Chief Elections Officer, Keith Lowenfield and others. Justice Persaud, however, was the lone dissenting voice.

“The court of appeal in a historic decision found that it has jurisdiction to entertain an appeal when an election petition has been dismissed on procedural grounds.

In so doing the court dismissed the Motion filed by Douglas Mendes SC on behalf of Bharat Jagdeo and by Mohabir Nandalal SC on behalf of the Government of Guyana,” Forde explained, shortly after the conclusion of the case.

When the matter came up in June, Senior Counsel Douglas Mendes – the attorney representing the Leader of the People’s Progressive Party/Civic (PPP/C), Bharrat Jagdeo – argued that the appellate court had no jurisdiction to hear the appeal. He submitted that the appeal is not covered under Article 163 (3) of the Constitution, and as a consequent, the Court has no jurisdiction.

But both the Chancellor and Justice Gregory-Barnes agreed with the arguments advanced by Forde that Article 163 of the Constitution confers jurisdiction on the Court of Appeal to entertain an appeal when an election petition has been dismissed on procedural grounds.

Only recently two University of the West Indies professors had also criticized the Court of Appeal here.
Their comments were however roundly condemned by Leader of the Alliance For Change (AFC), Khemraj Ramjattan, MP, who had  expressed the view that the recent analysis of Guyana’s Judiciary is not only deeply flawed, but is intended to negatively influence the process of appointing Cummings-Edwards as the substantive Chancellor of the Judiciary, and Justice Roxane George-Wiltshire as the substantive Chief Justice.

Ramjattan, who received the backing of Senior Counsel Roysdale Forde, MP, was at the time responding to a series of questions posed by Political Scientist, Dr. David Hinds during his online programme Politics 101.

During a virtual presentation on “The Judiciary and the 2020 Guyana Elections,” UWI’s Law Professor, Dr. Ronnie Yearwood and Professor Cynthia Barrow-Giles, who specializes in Political Science, brought into question the independence of the Court of Appeal, and in doing so, drew a distinction between the rulings handed down by the High Court and those delivered by the Appellate Court when compared to the Caribbean Court of Justice (CCJ).

“It seems often that the High Court and the Caribbean Court of Justice were on similar wavelengths and similar thoughts and reasoning. It was often the Court of Appeal where the judgement seems to go awry and then the CCJ correcting the Court of Appeal to say actually what the High Court originally ruled as the exclusive court to deal with electoral matters was right so we often saw that happen,” Professor Yearwood said.

While stating that she wished not to “impute anybody,” Professor Barrow-Giles, who headed the CARICOM Recount Team to Guyana in 2020, contended that some of the judgments that emanated from the Appellate Court were “highly questionable.”

Asked to weigh in on the matter, Ramjattan, who is also an attorney, said the sentiments expressed by the UWI professors were “very undiplomatic.” He said the attempt to insinuate that Guyana’s Court of Appeal is not independent on the basis that the CCJ has overturned its decisions on numerous occasions, while upholding rulings of the High Court, is simply flawed.

“…it was a terrible mistake they made,” the AFC Leader said. He told Dr. Hinds that the timing of the professors’ deliberation on the “Judiciary and Guyana’s 2020 Elections” is also highly suspicious.

Ramjattan said that the Professors are fully aware of the call by political parties in Guyana for Justice Cummings-Edwards and Justice George-Wiltshire to be appointed the substantive Chancellor and Chief Justice respectively.

He posited that the ruling People’s Progressive Party/Civic (PPP/C) Administration may want to rely on the “professors’ attack” to justifying their failure to confirm the judicial officers to the substantive posts.

Tue Dec 21 , 2021
Support Village Voice News With a Donation of Your Choice. Former Editor of the Guyana Chronicle, Claudette Earle has died, her son, Johann Earle has confirmed. Her son said his mother introduced him to Beethoven, Bach, Mozart, Rachmaninoff, Strauss, Liszt, James Last and so many others, at an early age. “She gave me the gift of a love for music […]