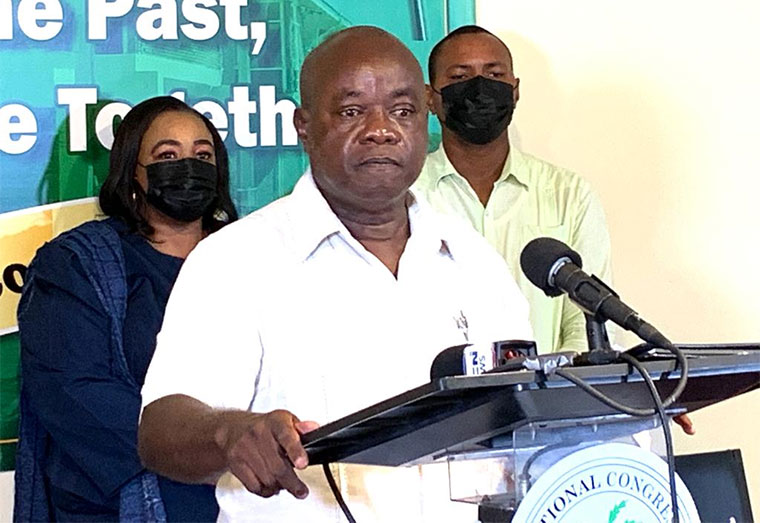 …vows to return PNCR to the grassroots

Aubrey Norton – the newly elected Leader of the People’s National Congress Reform (PNCR) – vowed to return the party to the grassroots, while tackling head on issues of national interest such as the need for a clean Voters’ List, an impartial Chief Elections Officer and a Natural Resources Fund (NRF) Legislation that ensures Guyanese reap the benefits of the Oil and Gas Industry.

“I want to promise you, that I will make this party a grassroots party; a party for all Guyanese of all ethnic groups. It is the kind of party we desire,” Norton said in an emotional address, shortly after he was inducted as the 5th Leader of the PNCR at Congress Place on Monday.

He replaces David Granger, who not only served as Party Leader but President of Guyana from 2015-2020.

Norton, who has extensively spoken about the need for inclusiveness, pledged to work with the Executive to transform the PNCR into a “permanent elections campaign machinery” to return the A Partnership for National Unity + Alliance For Change (APNU+AFC), for which PNCR forms a large part, back to Office.

“I will therefore struggle to strengthen this party institutionally. I promised inclusive governance, we will govern this party together, we will work together…This is our party, the elections are over and we must move forward,” he told those present.

As a united force, Norton said, the PNCR, first and foremost, must work to have a new National Register of Registrants from which the Voters’ List is derived. In and out of government, the party has contended that the Voters’ List is bloated with persons who are either deceased or have long migrated. In the middle of the elongated and highly controversial 2020 Elections, which spanned for a period of five months, the party contended that there were hundreds and possibly thousands of “ghost voters.”

“…We cannot go to an election without a new Voters’ List; it has been the basis on which a government was installed and we have to uninstall them and that process must begin with a new Voters’ List,” the PNCR Leader said.

Further, he said under his stewardship the PNCR will oppose vigorously the gerrymandering of the electoral boundaries. The Government has proposed to amend the Representation of the People’s Act to allow for Region Four to be divided into four sub-districts but Norton said the PNCR will not allow such a change to take place.

He has also vowed to protest, what he described as the imposition of a Chief Elections Officer in the person of Vishnu Persaud by the People’s Progressive Party/Civic (PPP/C) Government.

“We need to restore in this country, the situation where people are appointed based on merit in keeping with the specifications of the job. In this regard, we are satisfied that Vishnu Persaud was not the best candidate; it is a collusion between the PPP Commissioners and Claudette Singh, and therefore it will face protest in all forms and fashion, because the basis for free and fair elections, has to be independent elections officials and they are not,” Norton said.

He also took issue with the Natural Resources Fund (NRF) Bill, which was recently tabled by the PPP/C Administration in the National Assembly. According to him, it is designed to shortchange Guyanese of its resources.

“We will not allow the People’s Progressive Party to put in place a machinery to rob this country. I see the changes that they are seeking to make as creating the conditions for them to rob Guyana, we have to put an end to this kleptocracy. We cannot allow the resources of our country to be siphoned off by a corrupted PPP cabal,” he said.

Norton pointed out that as early as 1979, legislation was put in place to ensure that Oil and Gas resources of the country benefit Guyanese. He said he will ensure that the NRF also known as the Sovereign Wealth Fund is managed in the best interest of Guyanese.

“I want it to be made clear, we are not anti-private sector, in fact we believe that the private sector should act as civil society, independent, pursing interest of the private sector. We conclude a lot of times, the Commission doesn’t do that and therefore we need to have in place a private sector that reflects all ethnicities in this country and all businesses,” he said.

Norton said under his watch the party will work from the ground up to represent the people of Guyana.

Mon Dec 20 , 2021
Support Village Voice News With a Donation of Your Choice. …congratulates him on victory The U.S. Embassy here has congratulated newly elected leader of the PNCR, Mr. Aubrey Norton. The embassy in a terse statement said that it looks forward to working with him on issues for the benefit of all Guyanese. Norton secured 900 plus votes to win the […]