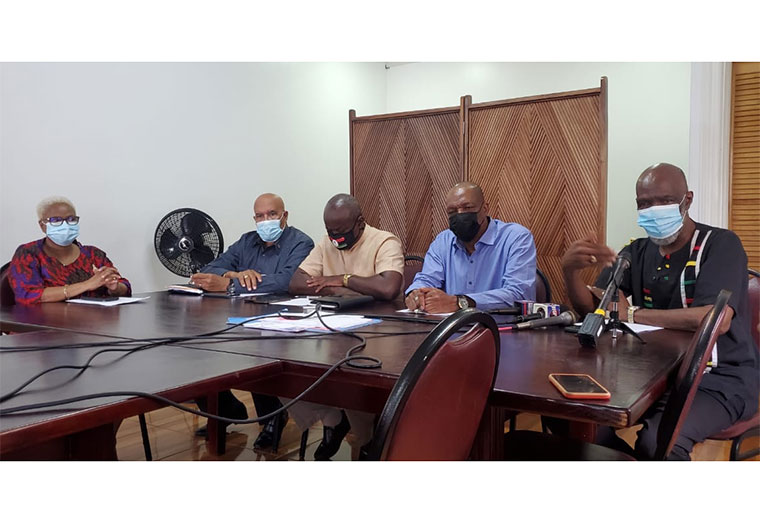 Ahead of today’s installation of Aubrey Norton as Leader of the People’s National Congress Reform (PNCR), his opponents Joseph Harmon and Dr. Richard Van West-Charles have offered him best wishes on this new journey.
Conceding defeat on Sunday, Harmon, in a brief statement, said he respects the choice of the delegates who went to the polls on Saturday during PNCR’s 21st Biennial Delegates Congress to elect a new leadership.
“I wish to congratulate Comrade Norton and want to extend good wishes and all success to the new leadership,” Harmon said while noting that he remains committed to the party.
“Over the coming weeks I am sure matters related to the new leadership will arise and I stand committed to the unity of the party as an ordinary member,” he added.

In another statement, Dr. Van West Charles also offered Norton best wishes.
“Congratulations to the incoming Leader Cde. Aubrey Norton, and all who will form a part of this new and august body. You are all representative of our democratic process and the will of the people,” Dr. Van West-Charles said while emphasizing that the will of the people must be respected.
“I urge each of you to keep this will foremost in mind, and in all your efforts remember this as representative of the base of the party, the pillars upon which our individual and collective success stands, he added.
Meanwhile, Shurwayne Holder, an Opposition Member of Parliament who hails from Region Two (Pomeroom-Supenaam), was elected Chairman of PNCR, replacing Volda Lawrence.

Mohammed FaaizMursaline has been elected Treasurer while Elizabeth Williams Niles has been elected 1ST Vice Chairperson and Christopher Jones and Vinceroy Jordan tied for the 2ND Vice Chairperson post. The elected 15 CEC members will be made public today.
Attorney-at-Law Amanza Walton-Desir and former Region 10 Regional Chairman Sharma Solomon, who had both vied for the chairmanship of the party, also registered their support for the incoming leadership, notwithstanding their loss.
“The PNCR has demonstrated that democratic norms and values are necessary to build a strong Party and indeed a strong country. The hard work of healing and uniting now begins! I remain steadfast in my support of the new leadership and I encourage every member to do the same. Long live the People’s National Congress Reform!!!” Walton-Desir said in a brief statement.

Solomon, in a statement on Sunday, said in offering his congratulations to Norton, discussed ways in which they can move the party forward.
“The elections are over and it is important now for the Party to quickly organise and hit the ground running, as the preservation of the values of the PNCR is paramount to all of us. The hallmark of our party’s democracy which promotes the vanguard culture of members having the opportunity to become leaders and the participation of members through a representative democratic process, where delegates elect their leadership, was on display,” Solomon said.

Mon Dec 20 , 2021
Support Village Voice News With a Donation of Your Choice. Moments after being inducted as the 5th Leader of the People’s National Congress Reform (PNCR), Aubrey Norton announced that in the spirit of inclusivity, he will appoint one of his opponents, Dr. Richard Van West Charles, as his Advisor along with immediate Past-Chairman, Volda Lawrence. “I want to also indicate […]