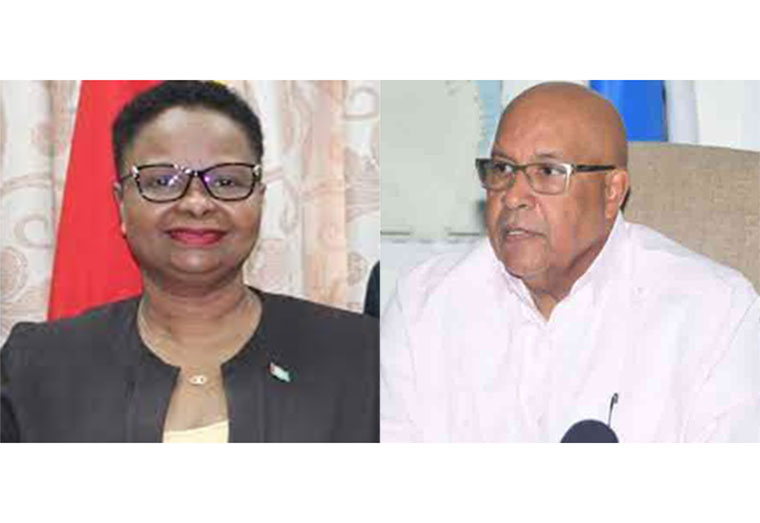 Moments after being inducted as the 5th Leader of the People’s National Congress Reform (PNCR), Aubrey Norton announced that in the spirit of inclusivity, he will appoint one of his opponents, Dr. Richard Van West Charles, as his Advisor along with immediate Past-Chairman, Volda Lawrence.
“I want to also indicate to the party that I promised inclusiveness, and that the party’s constitution provides for advisors to be appointed and in consultation with Dr. Van West-Charles, he would be made an advisor to this party,” Norton said in his maiden address as Leader at Congress Place, Sophia on Monday.
He said Lawrence, who served as chairman and acting leader in the run up to the 21st Biennial Delegates Congress, will be among his advisors, though she did not seek reelection at the level of the Central Executive Committee.

“I want to give a special thank you to the Chairman of the Party, Comrade Volda Lawrence, who managed excellently a period I would call, the period of uncertainty. You surely brought certainty to it, and gave direction,” Norton said.
Norton was elected Leader of the PNCR during the Biennial Congress alongside Shurwayne Holder (Chairman), Mohammed Faaiz Mursaline (Treasurer), Elizabeth Williams Niles (1stVice Chairperson) and Christopher Jones and Vinceroy Jordan, 2ndVice Chairpersons, along with 15 Executive Members.
Lawrence, in her final address as the outgoing Chairman of the PNCR, offered her unwavering support to the new Executive.
“Allow me at this time, to turn to my Leader, Chairman Treasurer, and those persons who have been chosen for the positions of Vice Chairmanship, and to say congratulations and to let you know that Volda Lawrence as a member of this great party is proud to be of service under your command,” Lawrence told the new Executive.

However, before presenting Norton and the other elected Executives with their instruments of appointment, Lawrence reminded them to operate within the confines of the party’s constitution.
“I speak of the party’s objectives, its principles, and conventions. Importantly also is to listen and respond to the voices of our people, not only our supporters but that of the nation at large,” she told the new Executive.
Both Lawrence and Norton used the occasion to express gratitude to the Chief Elections Officer (CEO), Vincent Alexander for smoothly executing last Saturday’s elections, which were conducted throughout the 10 Administrative Regions and in the North American Region as part of the PNCR’s Biennial Delegates Congress. The Chairman of the Accreditation Committee, Mortimer Mingo; Chairman of the Electoral Committee, Winston Felix; and Head of the Public Relations Team, Christopher Jones, were also acknowledged for their contribution to the success of the Congress.
The outgoing Leader, David Granger, also received special commendation from Norton for serving the PNCR for 10 years.

Mon Dec 20 , 2021
Support Village Voice News With a Donation of Your Choice. The Alliance For Change says it finds it abominable that the Irfaan Ali regime continues to violate the hallowed principle of Free Prior and Informed Consent (FPIC) that the world recognises as one of the strong pillars of good governance. The party made the comments in relation to government’s decision […]