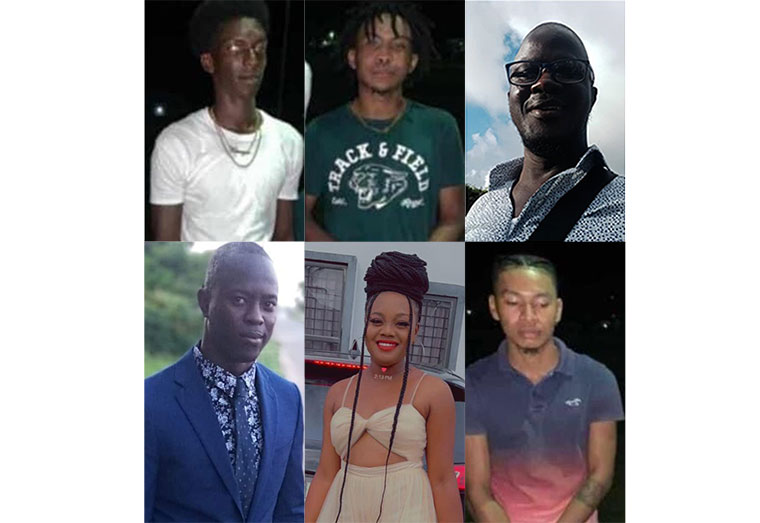 …one car bursts into flames in three-vehicle smash-up

Five males and one female were killed in a three-vehicle crash on the Ross Village Public Road West Coast Berbice Saturday morning which saw one vehicle bursting into flames on impact.

Linden MacFarlane 23 of Bel Air WCB. . Jason Saul 20 of Bel Air WCB and Gary Blair.
The deceased female has been identified as Keanna Dow age not yet determined of Belladrum Village West Coast Berbice.
Enquiries disclosed that motorcar # PYY 4293 and PWW 208 were proceeding west along the southern side of the road at a fast rate of speed, and motorcar # PNN 3536 was proceeding east at a fast rate of speed when a collision occurred.

Motorcar # PNN 3536 burst into flames on collision while extensive damage was done to all three vehicles.

As a result of the collision, occupants Jamal Lynch age 22 years of # 22 Belair West Coast Berbice, and Jashaun Saul age 19 years of # 22 Village West Coast Berbice who were both were in motorcar # PNN 3536, were taken out of the vehicle along with the driver and taken to Fort Wellington Public Hospital where they were seen and examined by a doctor who pronounced all dead on arrival.

Occupants in motorcar # PYY 4293 were Joel Jacobs age 29 years of Lot 661 Section D Turkeyen Georgetown, Brian Goodridge age 29 years of Lot 39 Public Road East Coast Demerara, Keanna Daw age 22 years of Lot 329 # 29 Village West Coast Berbice. They were taken out of the vehicle along with the driver and taken to Forth Wellington Public Hospital, where the said driver, Keanna Dow and Joel Jacobs were seen and examined by a doctor who pronounced them dead on arrival while Brian Goodridge was treated and referred to New Amsterdam Public Hospital where he was further examined and treated and referred to Georgetown Public hospital.

Occupant Fiona Massiah age 20 years of # 28 Village West Coast Berbice, and the driver were taken out of the vehicle (PWW208) and taken to the Mahaicony Public Hospital where it was discovered that the driver received head injuries, and the occupant a fractured leg.

Sun Dec 19 , 2021
Support Village Voice News With a Donation of Your Choice. …rakes its 900+ votes to be Leader of PNCR …Holder outperforms Forde, Walton-Desir to be next Chairman People’s National Congress Reform (PNCR) Stalwart, Aubrey Norton secured 900 plus votes to win the leadership race by a landslide over the other contenders, Joseph Harmon and Dr. Richard Van West-Charles, the Party’s […]