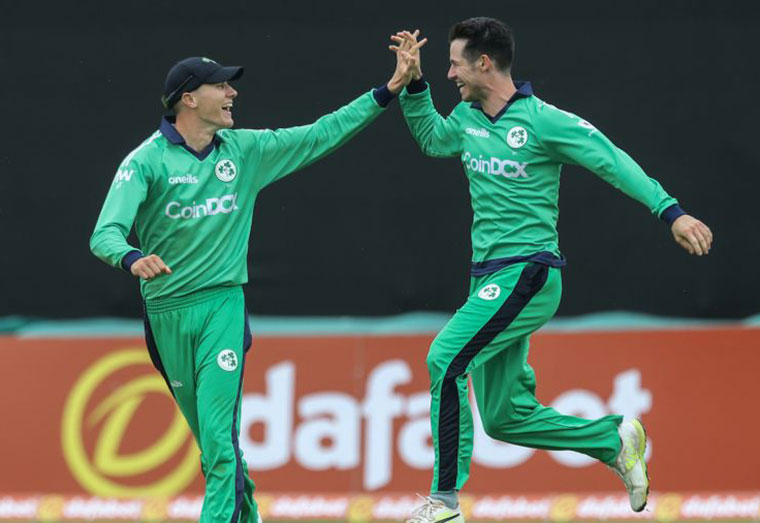 (CRICINFO) Four Ireland players and a member of the support staff have tested positive for Covid-19 ahead of their limited-overs tours of USA and the Caribbean. Pace bowler Josh Little, who is currently playing in the Lanka Premier League, has been called up to bolster the squad.

According to a Cricket Ireland release, Barry McCarthy and George Dockrell tested positive during pre-series testing and were not part of the squad that arrived in Miami on Friday. The duo are expected to link up with their team-mates in the USA soon, after completion of their isolation period and provision of a negative PCR result.

Harry Tector and Gareth Delany, already in Florida, having played in the recent US T20 Open tournament, returned positive tests for Covid-19 prior to joining with squad and have begun their 10-day in-room isolation.

Craig Young, meanwhile, was identified on the eve of departure as a close contact of a positive case. The media release stated under Northern Ireland guidelines he was not permitted to travel for 10 days and must receive a negative PCR test before he can join the squad.

Assistant coach Gary Wilson, too, had to delay his departure after “he received a false positive report on his pre-series Covid test. He is being re-tested, and if clear, will fly out on Sunday.” According to the statement, all players and coaches who arrived in Miami cleared their first pre-series Covid-19 tests since landing.

“We are pleased to have our squad arrive in Miami and are all looking forward to the series ahead, Richard Holdsworth, high performance director for Cricket Ireland, said. “We have experienced a few last-minute complications related to COVID, but with the extended travelling squad that we have taken, and the recall of Josh Little from Sri Lanka, we don’t foresee any issues with the series proceeding as scheduled.

“We have been very fortunate over the last 20 months to have had very few Covid-related issues impacting upon our international teams – and while the last few days have forced us into some last minute juggling, we are optimistic that we can minimise the impact on the USA series.”

Ireland are slated to play two T20Is and three ODIs against USA, between December 22 and 31. They will then tour the Caribbean to face West Indies in three ODIs, between January 8 and 14, and a one-off T20I scheduled for January 17.

Sun Dec 19 , 2021
Support Village Voice News With a Donation of Your Choice. —Simmons will take temporary charge of selection responsibilities (CRICINFO) Roger Harper’s two-year term as West Indies’ chairman of selectors will be coming to an end on December 31 with the board unwilling to renew his contract. Having taken up the job in late 2019, the teams that Harper selected won […]