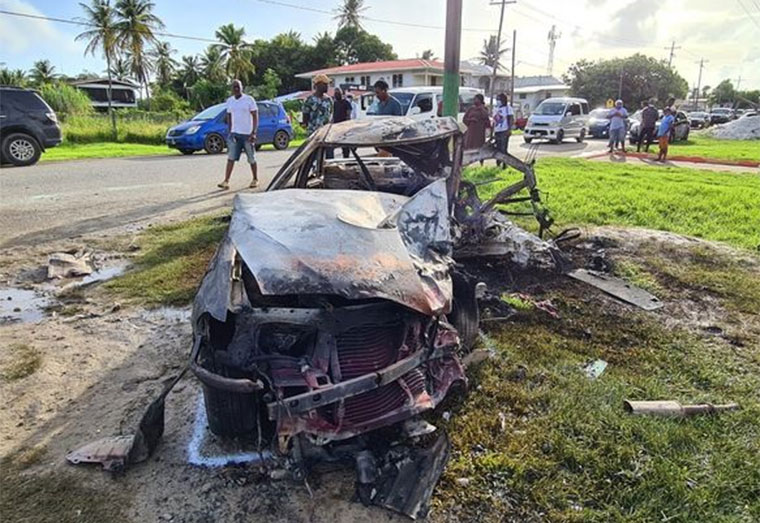 Five males  and one female were  killed in a three-vehicle crash  on the Ross Village Public Road West Coast Berbice this morning which saw one vehicle  bursting into flames on impact.

The deceased female has been identified as Keanna Dow  age not yet determined of Belladrum Village West Coast Berbice.
Early  reports are that  four of the dead from , three from Hopetown and one  from Bel Air were passengers of PNN 3526 the car which burst into flames on impact.
Village Voice News  observed that the  other two vehicles an X Trail Registration number PYY 4293 and a Toyota Corolla PWW 208 were reduced to  mangled wrecks  apparently as a result of a head on collision.

As at reporting time  police in Berbice are continuing their investigations to ascertain the cause of a deadly smashup.

Kyrie Irving to return to Brooklyn Nets set up

Sun Dec 19 , 2021
Support Village Voice News With a Donation of Your Choice. (BBC SPORT) The Brooklyn Nets will let Kyrie Irving return to action, despite previously saying he could not do so until he had been vaccinated against Covid-19. Irving has refused to be vaccinated but the Nets now say he can take part in “games and practices in which he is […]