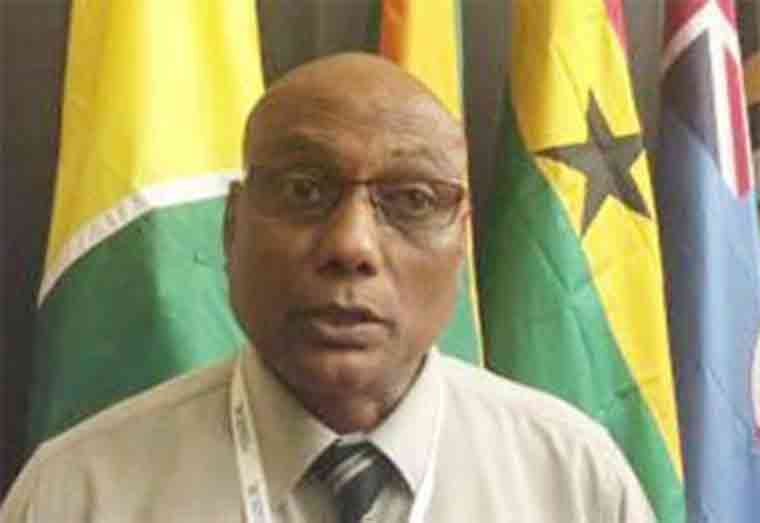 …though questions remain over Persaud’s years of experience
By Svetlana Marshall
Though the Elections Commissioners are highly divided on whether Vishnu Persaud has reached the criteria set out by the Guyana Elections Commission (GECOM) for the Chief Elections Officer (CEO) post, he along with Jamaica’s Leslie Harrow will be heading to the interviewing table based on a majority vote at the level of the Commission.
The decision was arrived at during Wednesday’s Meeting of the Elections Commission after two days of heated debate on whether Persaud qualifies for the post.
“We have decided to interview two candidates albeit not unanimously,” Elections Commissioner Vincent Alexander told Village Voice News on Wednesday shortly after existing the meeting.
Based on the requirements set by GECOM, Candidates for the CEO post, must have a Post Graduate Degree in Public Administration, Law or Management and specific training and verifiable experience in managing election systems along with at least 10 years of experience in a senior management position overseeing and directing diverse operations aimed at achieving targets within specific deadlines. Additionally, they are required to have at least 10 years of experience in Management of National Elections and Election Systems.
However, though Persaud worked at GECOM’s Secretariat for well over 10 years, for the majority of that period he served as the Public Relations Officer (PRO).

In fact, Persaud was first appointed in 2001 as the Public Relations Officer (PRO). In 2014, he was appointed substantive DCEO, however, when his contract expired in August 2017, it was not renewed, though efforts were made to do so. As such, it can be deduced that Persaud only served in a senior managerial position for a period of three years while at the Elections Commission.
During Tuesday’s meeting of the Commission, the People’s Progressive Party/Civic (PPP/C) aligned Commissioners reportedly sought to include Persaud’s 13 years as a PRO as experience gained in a managerial post, though according to GECOM’s organizational chart, a PRO does not form part of senior management.

On Tuesday, the Chairman of the Guyana Elections Commission (GECOM), Justice (Ret’d) Claudette Singh reportedly did not weigh in on Persaud’s qualification but voted in favour of him being interviewed.
“The chair though, on commenting on whether Persaud reaches the minimum requirement indicated her desire to hear from him and tipped the scale in favor of interviewing him,” Alexander told this newspaper.
According to his Linked-In profile, Persaud has a Master of Business Administration in Business Administration and Management from the Anglia Ruskin University and a Level 5 Certificate in Elections Management from the Chartered Management Institute in the UK. Aside from working at GECOM, Persaud worked as the Personal Assistant to the Minister of Fisheries Crops and Livestock (1999-2001) under the PPP/C Administration.
On his profile, he described himself as “a qualified, strategic and results-oriented professional with over 15 years of demonstrated success in optimizing electoral planning, management and implementation.”

Meanwhile, Harrow is the Director-General of Jamaica’s Office of Disaster Preparedness and Emergency Management (ODPEM) and Regional Manager at the Electoral Commission of Jamaica. He has a Professional Masters in Operations Management from the City and Guild of London Institute and an Executive Masters of Business Administration from the Commonwealth of Learning/University of the Commonwealth Caribbean (UCC).
Aside from Persaud and Harrow, GECOM’s IT Manager, Aneal Giddings; St. Kitts’ Eugene Petty; GECOM’s Assistant Registration Officer, Deodat Persaud; Dr. Kurt Clarke from the US were also shortlisted, however, they have not been shortlisted for interviews.
The Commission is expected to meet on Thursday to consider the applicants shortlisted for the six other positions – Deputy Chief Elections Officer (DCEO), Assistant Chief Elections Officer (ACEO), Legal Officer, Chief Accountant, Civic and Voter Education Manager and Logistics Manager.

Thu Dec 2 , 2021
Support Village Voice News With a Donation of Your Choice. —Harmon says PPP must know that this will not be accepted Former Finance Minister, Winston Jordan has been release from police custody after he was arrested by the Special Organised Crime Unit (SOCU) in relation to a series of alleged fraudulent transactions in which he is implicated, involving public funds […]