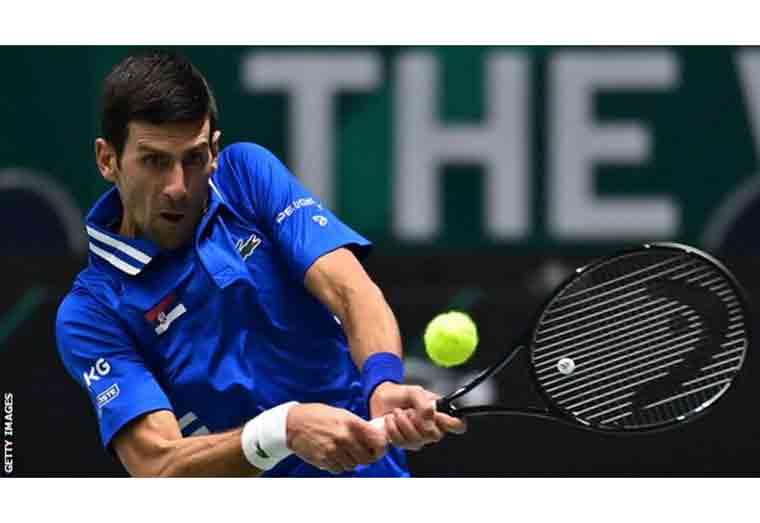 (BBC SPORT) World number one Novak Djokovic needed just one hour to beat Denis Novak and help Serbia to a 3-0 win over Austria on the second day of the Davis Cup.

Djokovic breezed past Novak 6-3 6-2 to give Serbia an unassailable 2-0 lead in the three-match tie.

Defending champions Spain and Italy were also victorious on the second day of the competition. Djokovic, who has not lost a Davis Cup singles rubber since 2011, was in imperious form against 110-ranked Novak.

He did not face a break point and dropped just six points on serve, racing through the second set in 28 minutes in Innsbruck. “It feels great to play for Serbia again,” Djokovic said. “It has been a long year, but you always find extra motivation playing for your country.”

Djokovic will likely be in action again on Saturday as Serbia face Germany, while US Open champion Daniil Medvedev will feature for the Russian Tennis Federation against Ecuador. Great Britain begin their campaign against France from 09:00 BST in Innsbruck, with live text coverage on the BBC Sport website.

Spain shrugged off a difficult few days to beat Ecuador 3-0 in their Group A opener. The 2019 winners were already without 20-time Grand Slam champion Rafael Nadal and Spanish number two Roberto Bautista Agut before 18-year-old Carlos Alcaraz tested positive for coronavirus on Thursday.

The disruption meant Feliciano Lopez was called on to play his first live Davis Cup singles rubber since 2016, which he won 6-3 6-3 against Roberto Quiroz.

Pablo Carreno Busta, the highest-ranked singles player in the Spanish team, then fought back to beat Emilio Gomez 5-7 6-3 7-6 (7-5). He then partnered Marcel Granollers-Pujol to a 6-4 6-7 (5-7) 7-6 (7-2) victory against Gonzalo Escobar and Diego Hidalgo in the doubles. Italy began their Group E campaign with a comprehensive 2-1 victory over the United States in Turin.

Rajeev Ram and Jack Sock ensured a consolation victory in the doubles with a 7-6 (7-5) 6-2 win over Fabio Fognini and Lorenzo Musetti. The Davis Cup is being held across three cities, with the semi-finals and final being held in Madrid from 3 to 5 December. Teams play two round-robin ties, each featuring two singles and one doubles rubber all played over best-of-three sets. The top teams from each group and the two best runners-up qualify for the quarter-finals.

West Indies leave out Holder, Russell, Hetmyer among others

Sun Nov 28 , 2021
Support Village Voice News With a Donation of Your Choice. —name new-look white-ball squads for Pakistan tour (CRICINFO) Jason Holder, Andre Russell, Evin Lewis and Shimron Hetmyer are among a number of regulars left out for one reason or another for West Indies’ upcoming white-ball tour of Pakistan, and both the ODI and T20I squads wear a very fresh look […]