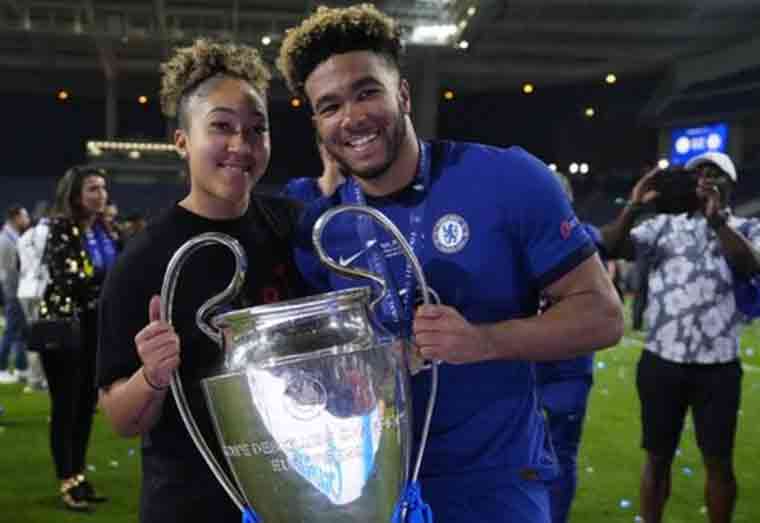 (BBC SPORT) For Nigel James, football is a family affair. But when he is not watching son Reece or daughter Lauren play for Chelsea, he is managing his own coaching business and helping young people thrive.

He looks after players from ages five to 18, and he set it up after his own football career stalled, following spells with Woking and Aldershot.

Growing up, full-back Reece, now 21, and striker Lauren, 19, as well as their elder brother Joshua, were enrolled in academies. They both played in older age groups, Reece joining the Under-9s at Fulham when he was seven before going on to Chelsea and Lauren playing for Arsenal Under-17s aged 13.

Nigel James says exposure to more coaching and equipment helped their development from the back garden.

“They played every day,” he tells BBC Sport. “If they weren’t playing with friends after school, they were playing with each other. There are not many families that had the contact time they had; they had a field and all the equipment they needed. They had poles, goals, and football after football because I was a coach.

“There were times I coached them, but if I didn’t, things were set up so that they went out and repeated what we’d done in a session, working on things. There might be times where Reece would be outside crossing a ball for Joshua to head or volley; he might have 50 balls to cross, and this is at a young age.”

Reece played everywhere across the pitch through the ranks at Chelsea, but his love of sport also led him to try his hand at cricket. “Reece used to play up front at Chelsea; he’d play in centre midfield,” Nigel recalls. “We used to play games against other soccer schools and he’d always play in defence, but when he was mucking about at home, he’d always go in goal. At one stage as an under-9, he was probably better than any other player as a goalkeeper, that is how good he was.

“He had to have the best boots and the best goalie gloves. He loved cricket, too; he wanted the best bats and pads. He’d sometimes take his stuff and play with a friend in the field for hours. He just loved sport.”

‘It made her the player she is today’

Lauren, who joined Chelsea from Manchester United in the summer and, after a spate of injuries, made her debut in the Champions League last week, really benefitted from joining in with her brothers.

“The impact that had was unreal,” Nigel continues. “If Lauren didn’t have that upbringing around elite-end boys, without realising it, she wouldn’t be where she is today. “She is an exceptional technician on the ball; the way she touches the ball is amazing. But that is what made her the player she is today. “The Chelsea fans may not know what they’ve got, but they’ll find out soon.”

‘They can write their own scripts’

Big decisions took both James children away from their family and to the north west to aid their development. In the summer of 2018, Reece joined Wigan Athletic on loan and Lauren joined Manchester United. Nigel believes moving to the DW Stadium for a year in the Championship was a real turning point for his son, before Frank Lampard gave him his opportunity at Chelsea.

“Wigan was the making of Reece,” says Nigel. “Lots of people said ‘oh, he’ll play higher’, but I’m a realist. I’ve seen a lot of talent not fulfil their potential. After that season, I could look back and say he could have a career in the Championship, that is how real I was. I wasn’t doubting his ability; this whole thing is about trust and somebody has to put you in the team. He’d proven himself in the Championship.

“When Chelsea gave him a chance, we were looking at going out on loan again. Sheffield United, Brighton and Palace were interested. Frank had taken the job, and he and Jody Morris talked to Reece. He came to me and said he wanted to give it a go at Chelsea. It isn’t down to me to say ‘you’re not going to play, let’s go to Palace or Brighton’. You’ve got to leave that to him.”

After a difficult end at Arsenal, Lauren, aged 16, headed for a newly formed Red Devils side in the Women’s Championship under former England star Casey Stoney. Nigel describes the excitement of the move and praised the club, but has been impressed by the professionalism of Chelsea and their manager Emma Hayes.

“It was perfect for her to develop, in a league that was a great starting point and with a manager who looked after her as if she was her own,” he says. “Her brother was only 20 minutes away, too. There were some fun times there, and some challenges; she had to learn to find her feet as a growing woman. She was their best player, so if she was 60% fit, she played, and that’s not good.

“At Chelsea, there is a squad of excellent players, so nobody needs to play at 60%; they have excellent staff. Lauren’s next step in her development needed to be in a professional environment.” Reece has already won the Champions League with Chelsea and become a regular in the England squad. For Lauren, the aim is to break into the first team for both club and country.

“As much as they want to put in, they can pick what they want to do,” James asserts. “If they continue to do the business, they can write their own scripts.”

Sun Nov 28 , 2021
Support Village Voice News With a Donation of Your Choice. Djokovic helps Serbia to victory over Austria in first group game (BBC SPORT) World number one Novak Djokovic needed just one hour to beat Denis Novak and help Serbia to a 3-0 win over Austria on the second day of the Davis Cup. Djokovic breezed past Novak 6-3 6-2 to […]