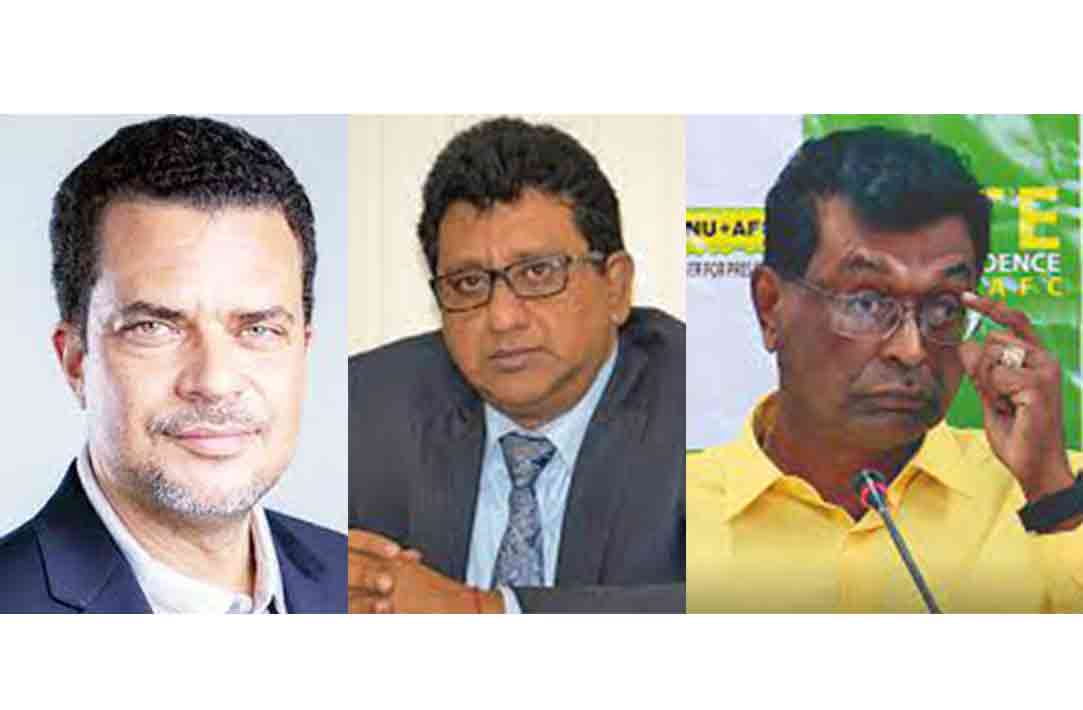 “You’re going to have a crisis on your hands, because quite frankly you don’t want to pull ill-educated people there, you want people who understand English language and who can do the thing,” AFC leader Khemraj Ramjattan said.

Chairman of A New and United Guyana (ANUG), Senior Counsel, Timothy Jonas has flagged as bureaucratic and draconian the proposed amendments under the Representation of the People Act for Region Four (Demerara-Mahaica) to be split into sub-districts, and the harsh penalties recommended for breaches of the electoral laws – a view endorsed by Leader of the Alliance For Change, Attorney-at-Law Khemraj Ramjattan.

According to the draft Representation of the People (Amendment) Bill 2021, which is currently in circulation for the purpose of consultation, the Chief Elections Officer (CEO) could be fined $10M and sentence to life imprisonment if he or she knowingly contravenes Section 83 by posting an electronic copy of a Statement of Poll (SOP) that is not a true reflection of the certified SOP delivered to him by a Returning Officer (RO).

Under that Section, the Government, through the Ministry of Legal Affairs, is also proposing a fine of $10M and 10 years imprisonment to be instituted against any Presiding Officer who prevents duly appointed candidates, counting agents and polling agents or alternate polling agents from verifying ballots and or recorded information at any stage of the electoral process. Under Section 83 (9B), additional penalties have been proposed for Presiding Officers who fail to provide agents with the requisite information.

Offering his perspective on the proposed amendments during an interview with Veteran Journalist Denis Chabrol on News-Talk Radio Guyana, the Chairman of ANUG, while describing the penalties as “draconian,” submitted that it could deter competent persons from taking up the post of Presiding Officer on the basis that a simple mistake or misjudgment could make them susceptible to a fine of $10M coupled with 10 years in jail.

“That goes pass draconian, that is representative of the culture in our society that makes us think that if we have a heavy hand, we can stop crime. It is not the solution,” Jonas said as he spoke alongside the Leader of the AFC.

Warning that the penalties, if passed into law, can be applied “easily” and “arbitrarily,” Jonas said Guyana has a history of Governments weaponising the Guyana Police Force and the Office of the Director of Public Prosecution (DPP) to prosecute persons seen as their “political enemies.” In support of his argument, he referenced to the case of Winston Brassington and Dr. Ashni Singh, who were hauled before the Courts; the 19 fraud charges, which were instituted against President Irfaan Ali while he was in the Opposition; and the plethora of charges currently being instituted against officials and supporters of the A Partnership for National Unity + Alliance For Change (APNU+AFC) Coalition.

Weighing in on the issue, Ramjattan said the Government, by proposing those hefty penalties, is seeking to create a “chilling effect.” But like Jonas, he warned, that the proposed penalties can discourage persons from taking up the post of a Presiding Officer.

“You’re going to have a crisis on your hands, because quite frankly you don’t want to pull ill-educated people there, you want people who understand English language and who can do the thing,” Ramjattan said.

But in justifying the proposed penalties during a subsequent interview on News-Talk Radio Guyana, Attorney General and Minister of Legal Affairs, Anil Nandlall said that the severe penalties are intended to match the magnitude of rigging Guyana has experienced over the years.

Pointing to the 2020 General and Regional Elections which were marred by widespread allegations of electoral fraud, the Attorney General contended that electoral frauds attempted or executed in Guyana are unlike anything experienced in the Caribbean or the Commonwealth.

Further, he submitted that when an election is rigged, thereby preventing the duly elected government from taking up office, it is “analogous to a lawful government being overthrown by tyrants.”

Minister Nandlall reasoned that: “When the democratic will of the people is denied, and those who are not elected are imposed as a government, it is akin to a coup d’état… When that happens, persons who commit those types of offenses are charged with offenses of treason and related offenses. Do you know what is the penalty for that? Death. Death is the penalty for treason.” Additionally, he contended that the penalties are meant to have a deterrent effect.

Another major proposal embedded in the draft legislation is the creation of “sub-districts” within Region Four to be managed and operated by the supernumerary returning officers.

The sub-districts being proposed under Section 6A (1) are: East Bank Demerara, North Georgetown, South Georgetown and the East Coast Demerara.

According to Section 6A (2), “Each of the polling sub-districts specified in subsection (1) shall be defined by such number of the total number of polling divisions which constitute district Region 4 under the National Assembly Elections (Constitution of Polling Districts) Order 1980, as may be determined by the Commission by Order.”

Under this new electoral system being proposed, the tabulation of the Statements of Poll (SOPs) in District Four will not be done at a single location as was done during the 2020 General and Regional Election but rather at different locations within the four sub-districts by the supernumerary returning officers.

Jonas said the proposed creation of sub-districts is unnecessary.

“As soon as we start complicating this thing, we make it opaque, less transparent. The system needs to be simple. We have not yet identified where the problems are, and the problems weren’t Region 4, the problem was the Region 4 Returning Officer,” the Chairman of ANUG said.

However, he said if GECOM so desires, for electoral purposes, there could be the creation of additional districts within the geographical regions but this should not be limited to District Four.

Ramjattan, in offering his sentiments, reminded that the Guyana Elections Commission (GECOM) is already empowered under the Electoral Laws to administratively subdivide any region to ensure the efficacy of its work.

But while both Ramjattan and Jonas support the uploading of SOPs and Tabulation Forms on the Commission’s website on the basis that it would foster greater transparency, Ramjattan from the onset expressed disappointment that the legislation was drafted without the input of the recently constituted Law Reform Commission, and most importantly, the Elections Commission.

CONSULTATION
Noting that Electoral Reform is almost similar to Constitutional Reform, the AFC Leader said the Law Reform Commission and the Guyana Elections Commission should have played leading roles in the drafting of the proposed legislation.

He said that it is unfortunate that the proposed amendments were drafted solely by the Attorney General’s Chambers when GECOM, in particular, is the expert on elections in Guyana, and understands the electoral challenges.

But Jonas, while acknowledging that the matter is sensitive and requires full transparency, pointed out that the Government dispatched the proposed amendments to political parties such as ANUG, and civil society organisations for review.

Unlike Ramjattan, Jonas does not believe that the Law Reform Commission needs to take the lead role but said there is no harm in including it.

“…I don’t see anything wrong with the leading party, who has control of Parliament; who has parliamentary counsel sitting in the Attorney General’s office whose job is to draft legislation, who has the facility, who has the wherewithal to put forward a draft, to say please give me your comment,” Jonas said.

He said given the issues that arose during the tenures of the past Chief Elections Officers (CEOs) Keith Lowenfield and Gocool Boodoo, it may be problematic for GECOM to take the lead role.

“It is ticklish process because where the expertise lies is where the distrust lies,” Jonas contended.

However, he iterated that the proposed amendments leave much to be desired.

“What we received here are draft regulations under the Act; draft amendments to the act; which add to the oppressive detail of the bureaucracy, which has the effect of rather than simplifying and creating transparency…it has the effect of obscuring, making the thing more bureaucratic, making the process more difficult to understand,” he said.

A COMMITMENT BY GOVERNMENT
In further responding to the concerns expressed, the Attorney reminded that the Irfaan Ali Administration had promised to be the driving force for Electoral Reform in the country, and it was against that commitment it opted to draft the legislation.

“Any country in the world, law reform is generally driven by a Government,” he said while noting that though the Law Reform Commission is now in place, it lacks the capacity to undertake such major task.

“The Law Reform Commission will play its role at the appropriate time when it receives the maturity that it requires. Right now it is in its embryonic stages; you can’t give a baby to do a man’s job,” the Attorney General said.

He said the Government has experienced and knowledgeable personnel who understand the electoral system in the country, its challenges and shortcomings.

Turning his attention to the proposal to divide District Four into sub-districts, the Attorney General said Region Four has proven to be most problematic.

He assured that amendments proposed are not intended to give any political party an electoral advantage.

“I wish to assure you that there is no sinister motive and these are not, in any form or fashion, designed to enhance the political fortunes of any political party, certainly not the People’s Progressive Party,” the Attorney General said while noting that Government is opened for consultation on the proposals. The National Assembly, by way of a vote, would have the final say.

Mon Nov 15 , 2021
Support Village Voice News With a Donation of Your Choice. Former General Secretary of the People’s National Congress Reform (PNCR), Aubrey Norton has reportedly picked up 17 nominations in Region Two (Pomeroon-Supenaam) and another 15 nominations in Region Three (Essequibo Islands-West Demerara) for the leadership of the PNCR. Initially, the Village Voice Newspaper reported that Norton had secured the majority […]