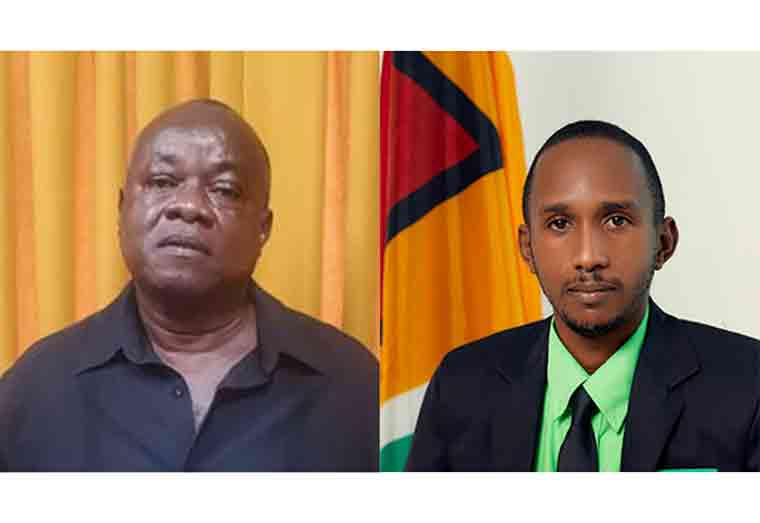 …says PNCR needs a strong, committed and fearless leader to strengthen the party

Describing him as a political genius, a grassroot politician and a man with a vision, People’s National Congress Reform (PNCR) Executive Member and Member of Parliament, Shurwayne Holder said Aubrey Norton, a political scientist, has what it takes to strongly oppose the People’s Progressive Party/Civic (PPP/C).

Holder is the first Opposition Member of Parliament to officially endorse Norton for the Leadership of the PNCR. A PNCR stalwart, having joined the party at the age of 15 in 1972, Norton believes he possesses the institutional knowledge and political skills to become the next Leader of the PNCR when the Biennial Congress is held in December.

In an interview with the Village Voice Newspaper, Holder said at this critical juncture, the PNCR needs a strong, committed and fearless leader to strengthen the party, and simultaneously oppose the PPP/C Government.

Thus far, Joseph Harmon, Aubrey Norton and Dr. Richard Van West-Charles are the three Executive Members vying to become the next Leader of the PNCR, but Holder believes that Norton is the only Candidate who has the ability to defeat the PPP/C, and return the PNCR to Office.

“I have worked with Aubrey closely on the Central Executive Committee…and I can tell you, he has tremendous experience in politics,” Holder said while noting that Norton would often devise solutions to problems facing the party, and since taking up the challenge to become the next Leader of the PNCR, he has articulated some “elaborate plans” to transform the party into a force to reckon with.

“Outside of that, I believe he is a political genius; he is a grassroot politician; he is always connected and in contact with the base,” Holder added. He noted that while it is an internal election, and only delegates would have the right to vote, the delegates must heed to the demand of the supporters, which is, to elect Norton Leader of the PNCR.

“I am convinced that they want Aubrey Norton,” he said.

A MAN WITH A VISION

Holder told the Village Voice Newspaper that Norton has a plan to unify the PNCR. In fact, he believes that Norton is the sole candidate who has the ability to unify the party, and make it self-sufficient. Further, he said the Political Scientist and PNCR stalwart has devised a plan to transform the PNCR into an elections machinery.

“You can’t fall to sleep after elections and then wake up back at the next elections,” he posited, while underscoring the need for the party to be proactive in its approach to critical issues.

Importantly, Holder said Norton has committed to youth leadership with guidance from the party’s seniors. “He has promised to be an inclusive leader, and in so doing, to promote competent youths, and push them into the leadership,” Holder further pointed out.

THE CHAIRMANSHIP
For his part, the Opposition MP, who hails from Region Two (Pomeroom-Supenaam) has an interest in becoming the next Chairman of the PNCR, however, at this stage, he is still consulting with his seniors and supporters on the matter.

Aside from being a Parliamentarian and an Executive Member of the Central Executive Committee (CEC) for the last three years, Holder has a Bachelor’s Degree in Mechanical Engineering with Distinction from the University of Guyana. He is currently reading for a Master’s Degree in Energy Efficiency and Renewable Energy.

Holder told this newspaper, that should he enter the race to become the next Chairman of the PNCR, he will be doing so with an edge over the other Candidates.

“If I do join the race, based on the other persons who have indicated that they are competing for the chairmanship, I think I stand out. Why? I think I have a clear advantage because I have a constituency behind me. I think by now our party members and supporters appreciate that I am a grassroot politician that is always on the ground, representing people, and is in constant contact with the base,” he told this newspaper.

He said too that his managerial skill is an asset.

“While I bring the element of youth, which is much needed in the party at this time, I am also a qualified engineer with over 10 years experience as a senior manager. During those 10 years, I had under my direct control, five departments, so I bring that management skill to the party,” he said.

Holder also described himself as a family oriented person, who brings a multi ethnic element to the party.

“And what do I mean? My father is Afro-Guyanese, my mother is Indo-Guyanese and my kids are indigenous mixed. So I bring that multi-ethnic element to the leadership of the party,” he added.

Pointing out that his father is the Chairman of the PNCR Arm in Region Two, and that his grandfather also served in senior leadership positions within the PNCR at the regional level, Holder said “I have my roots in the PNC.”

“I was born into the PNC,” he added while noting that his middle name ‘Forbes’ is no coincidence. Holder recalled the days when the Party’s Founder-Leader Linden Forbes Sampson Burnham visited their home.

Noting that he is a team player, Holder said he remains committed to the party regardless of who wins or lose.

“While I am endorsing Aubrey Norton, and I believe he is the best amongst the three candidates, I am ready to work with any leader. I am very level headed and I know that I can bring people together and I understand how to deal with people and their differences, and I think I can work with any team to rebuild the party,” Holder said.

Thus far, Senior Counsel Roysdale Forde and Attorney-at-Law Amanza Walton-Desir have signaled their interest in the chairmanship of the party.

Sun Nov 7 , 2021
Support Village Voice News With a Donation of Your Choice. —young Linden businessman encourages after early setbacks in life Not only does hustling enable people to achieve financial freedom but it allows them to see their true potential. A prime example of a hustler is 20-year-old Lloyd Guppy of Wismar, Linden whose determination to succeed regardless of setbacks faced have […]