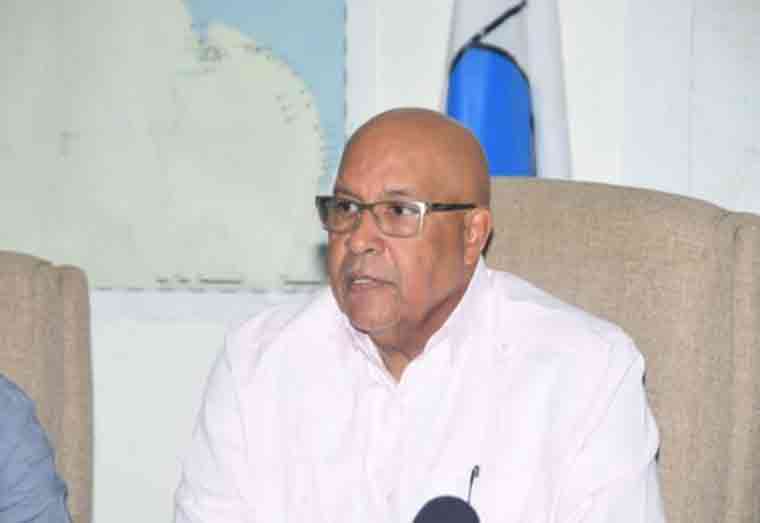 By Svetlana Marshall
Contending that in recent years the voices of members within the People’s National Congress Reform (PNCR) have been suppressed, giving rise to the perception that there is a “maximum leader” though not catered for in the Constitution, PNCR stalwart, Dr. Richard Van-West Charles said should he be elected Leader, he will work to erase such a perception while strengthening the party through teamwork with focus on education, training and business.

In an interview with the Village Voice Newspaper, Dr. Van-West Charles – the son-in-law of the PNCR’s late Founder-Leader Forbes Burnham – said the PNCR, which is now in existence for 64 years, was a well-organized political party up until early 2000s. He said during that period, the voices of members were heard regardless of the opinion shared but such cannot be said of the current environment.

For the avoidance of doubt, he said there is no such concept within the Constitution of the PNCR.

“The constitution doesn’t make mention of any maximum leader, it makes mention of the leader and the governance system but I think a culture has evolved in a way that gives people this impression of a concept of a maximum leader, and it is not necessarily a good concept,” he said.

THE MAN FOR THE JOB
But all hope is not lost. Dr. Van-West Charles, said given his political and professional experience, he has what it takes to transform the PNCR into a robust political machinery that would advance policies aimed at fostering greater inclusiveness while simultaneously improving the lives of all Guyanese.

Dr. Van-West Charles, a former Minister of Health, has served as Special Advisor Partnerships with the International Financial Institutions at the World Health Organization (WHO); Area Manager for Information and Knowledge Management, PAHO/WHO as well as PAHO/WHO Representative for Jamaica; Cayman Islands and Bermuda. He is also a former Academic Dean of St. Helen University Medical School and Health Sciences. Most recently, he served as the Chief Executive Officer (CEO) of the Guyana Water Incorporated (GWI).

Thus far, he is running against the country’s Opposition Leader, Joseph Harmon and Political Scientist and Party Stalwart, Aubrey Norton for the leadership of the party. However, by his own judgment, Dr. Van-West Charles said he is leading the race.

“If you look at my experience, both political and developmental, you’ll see that I’m ahead and therefore, I am ahead in terms of knowledge, and I am ahead in terms of deliverables. I have delivered; as Minister I have delivered…[and] I delivered in many other areas. At GWI I delivered, so it is not a question of whether I can deliver or not. I have a track record that shows that I can deliver and I do deliver,” he told this newspaper.

However, Dr. Van-West Charles said the advancements made under his stewardship in the various organizations were a result of teamwork, and he stands committed to working with all members of the PNCR for its advancement.

EDUCATION AND TRAINING
The former Health Minister said should he emerge victorious, he will work to develop a training institute to equip members and supporters, alike, with the requisite skills and knowledge needed to effectively operate in public offices, including at the level of the Neighbourhood Democratic Councils, the Regional Democratic Councils and the Parliament of Guyana.

“The party should not wait to train people after it wins an election as to how they should function as a NDC councilor, RDC councilor or as a Parliamentarian. So our members first of all need to be trained for these different functions. Our members and supporters are going to sit on boards, so they need to be trained how to function on boards to bring more efficiency to the services and to represent the people,” Dr. Van-West Charles shared.

It is also his vision to have persons undergo political training to understand the democratic principles and values that exist, in addition to the importance of transparency and accountability within the system of governance.

Additionally, it is his intention to have young people receive technical and vocational skills training in the areas of automotive repair, plumbing, culinary arts, fashion design, welding, electricity generation and music among other areas of interest.

“I would also want to see a business arm of the party, which in effect can offer micro financing,” he added, while noting too that training in Business and Financial Management would also be done.

Those aside, Dr. Van-West Charles said the party must keep its eyes on the inequities in society, however, in order to do so, it must have a strong research unit to assist at both the political and parliamentary levels.

To avoid persons from holding onto positions for extensive periods, Dr. Van-West Charles is also proposing that there be term limits for the Leader and Central Executive Members of the party to allow for “fresh blood.”

He submitted that a Leader should not run for more than 10 years, and CEC Members not more than five years.

“It allows fresh blood to come into the system, it allows the transfer of knowledge,” he posited while adding that it would also allow for the party to refresh and grow from strength to strength.