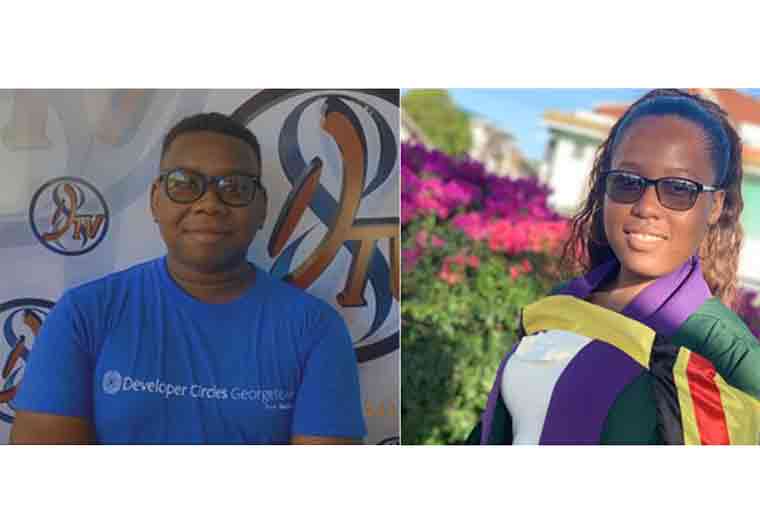 Two Guyanese involved in Science, Technology, Engineering, and Mathematics (STEM) have been nominated for the 2021 STEM Success Awards — seven prestigious awards given to professionals globally for their outstanding efforts to grow and advance STEM.

LEADING THROUGH TECHNOLOGY
Stephanie Simon, a Masters Degree student in Artificial Intelligence (AI) at the International University of Applied Sciences (IU), has been nominated as one of six who could receive the Technologist of the Year award.

Simon is a graduate of the University of Guyana (UG) and comes from the community of East Ruimveldt, Georgetown. From a young age, she became involved in STEM later becoming a Master Trainer at STEM Guyana, a Team Mentor representing Guyana at the Annual First Global robotics in Mexico City and the co-founder of the University of Guyana Robotics Club (UGRC) and Computer Science-Technology Education Revolution (CS-Tech Ed Rev Club).

She has coordinated and conducted outreach programs in collaboration with the former First Lady of Guyana, Sandra Granger on behalf of the founder of STEM Guyana, Karen Abrams and the Department of Youth.

Simon recently earned her bachelor’s degree in Computer Science and is employed by the Guyana Defence Force (GDF) as a Software Developer/Junior programmer. She also works part-time with Trifinity Solutions Inc. as a Social Media Marketing Manager by helping clients to develop strategies and solutions to grow their business online.
She has much more under her belt and hopes to be selected as this year’s Technologist of the Year.

Simon told the Village Voice News: “I strongly believe that STEM Education is uniquely important to Guyana for it plays a vital role in children’s lives because it can broaden the horizons of the mind. If you learn to think in a scientific way, you keep trying to implement new ways no matter how difficult it gets.”

CREATING A PASSION FOR STEM
Meanwhile, nominated as one among eight for Educator of the Year is Bradley Downer. He grew up in the small West Coast Berbice village of Yeoville and, upon completing High School, gained a scholarship from the Government of Guyana to pursue an Environmental Health Assistants Training program with the Ministry of Public Health.

Added to this, he has pursued several online training programs in coding, cybersecurity, augmented reality and bioinformatics. He also volunteers with tech-based organizations such as Trifinity Solutions, Facebook Developer’s Circle – Georgetown and the Shine Your Light Initiative.

“I feel honoured that people are seeing the work I’m doing, not just local folks, but international folks. It gives me this drive to continue pushing,” Downer said. For him, winning the award will show other Guyanese that their circumstances don’t have to define them.

Meanwhile, Simon said: “Winning this award will help to inspire my Guyanese people especially the girls out there that feel they cannot make it — not only in the tech industry but in other fields of study. They can break barriers once they put their minds to it, for it does not matter where you come from, there are a bunch of opportunities out there for you to make your dreams a reality.”
To vote for Simon and Downer, you must register for the summit. Voting can be done at https://www.stemsuccesssummit.com/summit-awards. Award recipients will be announced during the Stem Success Summit hosted November 17-20, 2021.

Sun Oct 31 , 2021
Support Village Voice News With a Donation of Your Choice. …. promises to launch training institute, business arm to foster grown and development By Svetlana Marshall Contending that in recent years the voices of members within the People’s National Congress Reform (PNCR) have been suppressed, giving rise to the perception that there is a “maximum leader” though not catered for […]