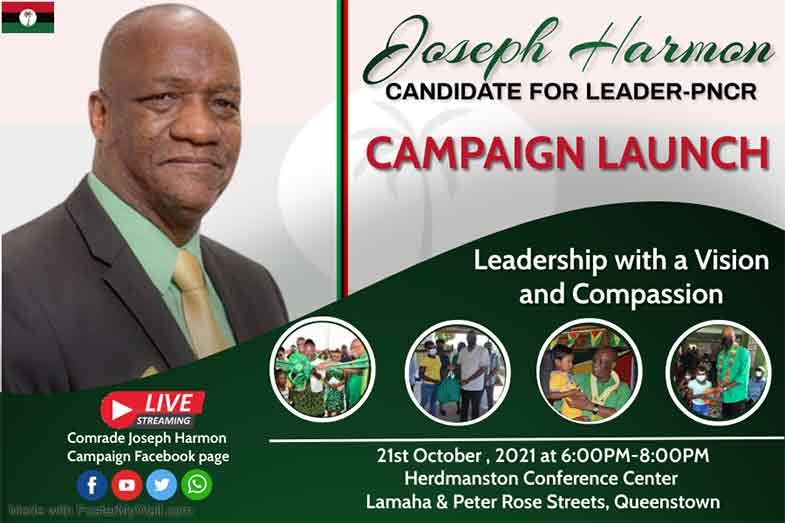 LEADER of Opposition (LOO) Joseph Harmon will Thursday evening launch his campaign for the leadership of the PNCR two months ahead of the party’s congress.

Harmon, Aubrey Norton and Dr Richard Van West Charles are among those who have signalled their intentions to replace former President David Granger as the leader of the party. There have been noises about current party Chairman, Volda Lawrence putting in her bid, but she has not confirmed this.

Harmon’s campaign launch will be held at Herdmanston Lodge, Queenstown Georgetown and will also stream live on Facebook and other social media platforms. His bid for the top post of the Sophia- headquartered party mirrors that of a previous challenge for the chairmanship which he lost to Lawrence.

For his part, Norton has been making the rounds on online talk shows, putting forward his plans for the party. A politician for 49 years, Political Scientist Aubrey Norton said he has what it takes to return the People’s National Congress/Reform (PNC/R) and its coalition partners back to Government.
“Once the Congress of the People’s National Congress Reform is called, I intend to run for the leadership of the party,” Norton had told this newspaper in a previous interview.

Norton said the institutional knowledge acquired together with the political skills developed over the last 49 years makes him an exception candidate for the leadership of the PNC/R.

“I know the party inside out; I have worked in every region of this country for the People’s National Congress, and later the People’s National Congress/Reform, and what that means is that I have institutional memory, I have [a] relationship [with members] across the party and in large measure I know some of the problems within the party that we need to solve,” Norton told this newspaper.

Following its defeat at the March 2020 elections the PNCR has been in the throes of a leadership crisis. Several executive and rank and file members have publicly criticised the leadership style of Granger and have even gotten party group to pass no confidence motions against him. Granger has since taken leave of absence, but according to insiders he is still very much in charge.

Thu Oct 21 , 2021
Support Village Voice News With a Donation of Your Choice. …Bosai workers take to the streets, demanding 10% increase in pay  By Svetlana Marshall Workers at Bosai Minerals Group Guyana Incorporated (BMGGI), on Thursday, initiated protest action against the management of the Linden-based bauxite company demanding a 10% increase in wages and salaries. Outside of the company’s Mackenzie, Linden worksite, […]