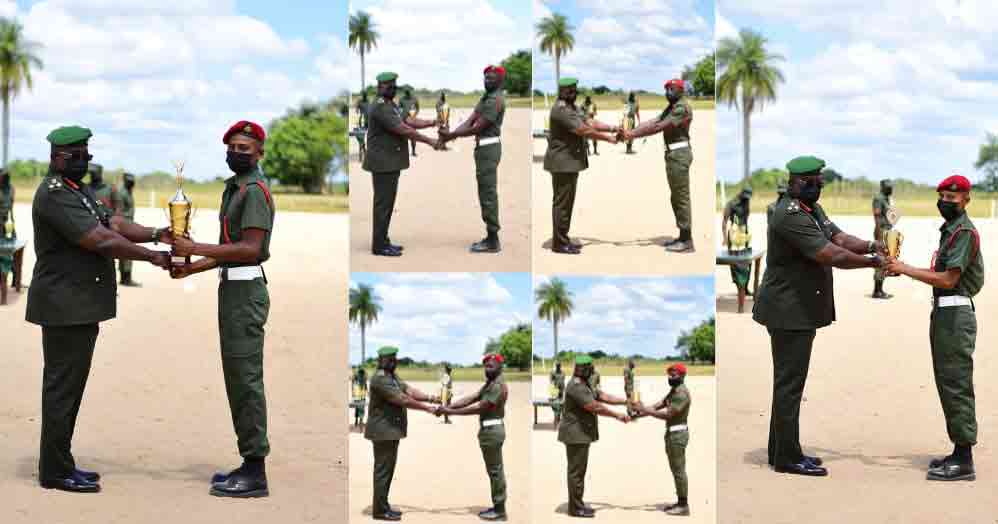 A total of 153 recruits have completed the Guyana Defence Force’s (GDFs) Basic Recruit Course (BRC) 2021-02 with a budding aeronautical engineer from Kwakwani, Region 10, emerging as the Best Graduating Student.

The training programme commenced on July 26, 2021, and ended on October 20 with a graduation parade at the Patrick Williams Drill Square at the Colonel John Clarke Military School, Tacama.

Chief-of-Staff, Brigadier Godfrey Bess, in his feature address, congratulated the new batch of soldiers and thanked them for choosing the profession and staying the course.

“Thank you for answering when we called, and for pushing yourself beyond your expectations, and ensuring that you made it to your graduation parade, today, to officially become soldiers of the Guyana Defence Force,” Bess said, according to ta GDF release.

He underscored the importance that should be placed on commitment and service to effectively deliver on the role of the GDF, as is mandated by the Constitution. Bess also highlighted that, for the soldiers to understand their role, they must first understand who is a soldier and what are the expectations.

The Best Graduating Student is Private Hicks Mittleholzer. He said during the ceremony:

“I believe the GDF has the opportunities and scope to propel me where I want to go. I have a timeline set for myself to achieve my goals and I plan to realize these, with the foundation provided by the GDF.”

Private Rodrigues, who hails from Kumu, Lethem, Region 9, said that he is privileged and honored to be the recipient of the award. “As a young boy growing up in my village, I have always had my focus set on becoming a soldier. My late father is my inspiration. He was an extremely disciplined, proud and loyal soldier. In his time, he had won the award for the Best Shot and his trophy is displayed at my grandmother’s home. I feel proud to have contributed to his legacy,” Rodrigues said.

The Best Platoon prize was awarded to the Number Three Platoon. At the ceremony, Chief-of-Staff, Officers, Warrant Officers, Senior Non-Commissioned Officers, Ranks and Civilian employees congratulates and welcomed the soldiers to the GDF.

PAC Clerk collapses due to high stress levels at meetings

Thu Oct 21 , 2021
Support Village Voice News With a Donation of Your Choice. ….Isaac’s says all other clerks unwilling to work at PAC due to unprofessional conduct of members  By Svetlana Marshall Clerk of the National Assembly, Sherlock Isaacs said one of his Clerks has developed health issues due to high-stress levels experienced at the Public Accounts Committee (PAC) Meetings. “Due to the […]