“Villagers in Perth , neighbors may have an occasional conflict among themselves but the same person who you had it out with yesterday would be the first to reach out and help you if you are in distress and need support today.”

These are the words of lifelong resident of Perth Village Gleavia Bourne. Her sentiments were seconded by many of the residents during a visit to this village by a reporter for the Village Voice website earlier this week.

Perth Village is located in Central Mahaicony which is part of Region 5 Mahaica Berbice some 30 miles South-East of Georgetown. Perth Village is the largest village in the Hamlet/Chance Neighbourhood Democratic Council (NDC) and nestles on the left bank of the Mahaicony River.

To get there a visitor needs to get to Central Mahaicony and then take the Mahaicony Branch Road which runs parallel to the Mahaicony River and travel approximately four miles inland. Like in other areas along the Atlantic Coast the soil is rich with nutrients, the Atlantic Ocean is close by and farming and fishing are two of the oldest economic activities in this and nearby riverine villages and are still the most popular way of life for the residents of Perth.

The villagers comprise cash crop, livestock and rice farmers- many of them are large scale rice farmers who are benefiting from the main irrigation channel the Perth/Biaboo Main Canal aback of the village.

Many villagers are also members of the agricultural cooperative the Central Mahaicony Perth Village Farmers’ Association formed in 2005. This Coop is known for cash crop and ground provision, livestock, and poultry: pork production and value added pork products such as smoke ham, honey glazed ham, pepper glazed ham, bacon and pork and hams and sausages.

The village is also notably the home of the pioneering Perth Union Burial Society which was formed by village leader Mr. Sproston Alexander Halley on August 2nd 1930 to give financial assistance to indigent villagers who experienced the death of a relative and were unable to bear the funeral expenses.

Perth nestling as it does on the banks of the Mahaicony River has been subject to severe flooding ever since former ex enslaved Africans settled there. Persons in their sixties have reported the devastation of the village and other villages in the area during the great flood of 1950.

“That flood happened before I was born and I am in my sixties,” said lifelong resident Ms. Pamela Mentore. “As a child I heard stories about the hardships people in the village suffered during that flood, in 1950. I was told of villagers here in Perth having to evacuate their homes and seek refuge in this building which is the home of the Burial society.”

And there was of course the great flood of 2005 which was described as the greatest flood ever recorded in Guyana and its devastating effects on the farms which are the main source of livelihood for the villagers.

The affairs of the village and its neighbors, including developmental activities are being run by a six member Hamlet/Chance NDC headed by Chairman Mr Marlon McRae.

With the leadership of Mr Marlon McRae Chairman, the six member Council is responsible for providing efficient services for the residents including sanitation, garbage disposal, road/dam maintenance, market facilities, burial grounds, abattoirs, drainage, etc.maintenance and protection of public property and the collection of rates and taxes to finance these activities.

Perth village like the other villages also benefit from an annual subvention which is ploughed into major works such as upgrading of community streets and D&I infrastructure. The village has in recent times benefited from ongoing improvements in its drainage systems with the establishment of kokers and revetment works along the banks of the ever threatening Mahaicony River. Overseer of the NDC Ms Shaundell Roberston told Village Voice that there are major infrastructure works such as upgrading of community roads currently ongoing. in the NDC and the villages by both the Ministry of Public works and the Regional Administration of Region 5.

Most of the villagers agree that there have been improvements in the quality of life in the village over the past few years. They are currently however perturbed about two main issues namely: the current unfinished state of the Perth Village Playground and the poor state of internet connectivity.

Ms. Gleavia Bourne who is also a Regional Democratic Councilor in Region 5 said that a main problem in the village is the lack of a recreational playground. She disclosed that work on the playground was started by the previous administration and was at the moment was about 90% complete. “However since the change of Government this playground project has been at a standstill.”

She said that residents are hoping that the current Administration will complete the playground and erect a pavilion so that both the young and the old of Perth can get this avenue for recreation and the development of sports and cultural activities. Mr. Winsworth Halley another lifelong resident of Perth Village concurred about an urgent need for a proper ball field or recreational fun park for youths in the village. “This village has a large number of talented sports-oriented youths but we are not able to develop and excel as expected because there is no proper training or recreational facilities.

“We are still waiting for the playfield that has been promised to us for several months now, but that area is just fenced up with zinc sheets and the relative authorities are not making an effort to complete the project.

“We are hoping that the situation can be addressed by the current administration for the benefit of this village and the other villages in this Hamlet Chance NDC,” he said. Overseer Ms Robertson said that the NDC has addressed the issue of the Sports Club ground and the need for a pavilion with letters to the Ministry of Sports and the Ministry of Sports.

“We are awaiting a reply,” she said.

The main public building in the Village, the Perth Union Burial Society Hall has internet connectivity but can only accommodate ten users at a time after which the quality of the connectivity deteriorates. “We need more connectivity for this community, especially given the restrictions on direct school attendance due to the COVID 19 pandemic,” Ms Bourne said. Despite these irritances residents of Perth village say that they like the quiet peaceful and crime free-ambience of their village. Gleavia Bourne summed up Perth: “They say that teeth and tongue does bite; there will be conflict. but at the end of the day all the villagers here cooperate when necessary. Here in Perth we live like one big family.”

Sun Oct 17 , 2021
Support Village Voice News With a Donation of Your Choice. The Regional Education Office in Region Seven (Cuyuni-Mazaruni) has reportedly warned teachers in Paruima that they too will be barred from entering the school’s compound in the coming week, if they are unable to produce their COVID-19 vaccination cards or negative PCR test results. Absenteeism, the Office further warned, will […] 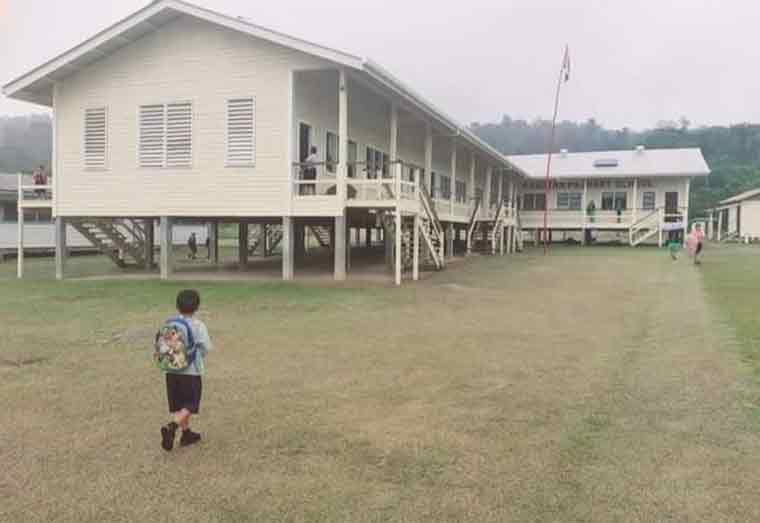