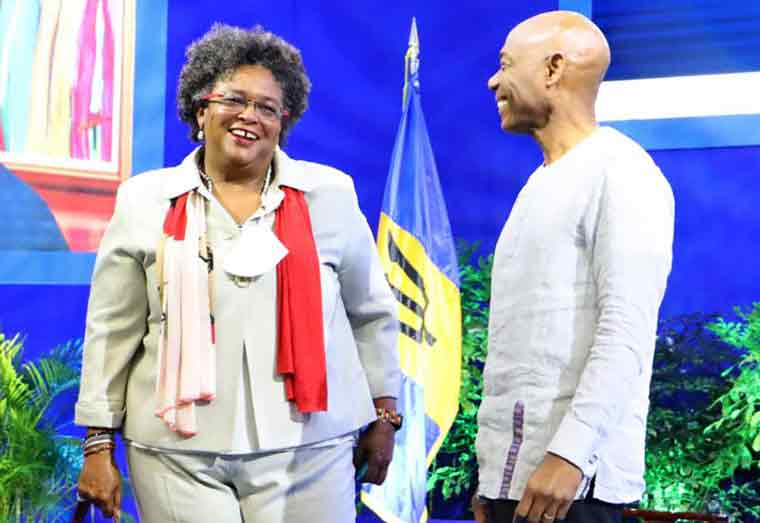 President of the Caribbean Development Bank, (CDB) Dr Hyginus ‘Gene’ Leon has proposed that the US$2.5 billion in Special Drawing Rights (SDRs) available to Caribbean countries from the International Monetary Fund (IMF) be pooled to unlock even more financing in the capital markets. Dr. Leon has also sounded his intention to present a proposal to Caribbean Community (CARICOM) Heads on a financial mechanism to achieve this objective.

Speaking at the second edition of the Bank’s President’s Chat forum yesterday, featuring special guest Prime Minister of Barbados, Hon. Mia Amor Mottley, the CDB President advised that combining the recent SDR allocations assigned by the IMF could be the practical and powerful collaboration needed to improve the economic position of the Region.

The SDR is an interest-bearing international reserve asset created by the IMF. Members can use their SDR allocation to supplement or build their national reserves instead of accruing debt. In August 2021, the IMF implemented its largest general allocation to date of SDR 456 billion (US$650 billion) to address global need in the wake of the COVID-19 crisis.

Dr Leon, who worked with the IMF for more than two decades, noted that CDB’s Borrowing Member Countries collectively had about 1.7 billion SDRs allocated to them. He advised that rather than each country drawing down and using its individual allocation, a more effective solution would be a combined financial instrument for the Region’s benefit.

“Alternatively, we have an opportunity to say, ‘what if we pool all of that 1.7 billions SDRs – [about] US$ 2.5 billion, and now invest it into an equivalent reserve asset type of instrument that could be issued by a CDB?” he stated.

He laid out how this financial instrument could then be used in turn to invigorate the capital markets and access more and better financing for the Caribbean’s development needs.

“That could now be used through the higher rating and a stronger link with the capital markets to now energise a crowding-in of that very capital we’ve been talking about before. You may be able to think immediately of a pool of funds that could be as much as US$5 billion or even more that could be used to help drive this very development agenda that we’re talking about,” he added.

Prime Minister Mottley uged CDB to advance the proposal quickly, pointing out that many countries would presently be making decisions on how they will use their SDR allocations.

“We will certainly sit down with you and look at it because I’ve been arguing for the last few years that we need to use what we have to unlock other funding. So, I’d like to invite you to put something before the [CARICOM] Heads as soon as possible and let us discuss it because quite frankly a number of countries are making determinations now as to how they use their SDRs,” stated Mottley.

She expanded on how Barbados was contemplating making use of its SDR allocation, adding:

“I would like to be able to use ours in a way that has a meaningful legacy – Barbados has argued that we want to be able to go into the life sciences…. When we look at how many people we’ve produced out of the University of the West Indies in the last five years – it’s about 6000 people [who have graduated] in the sciences and where have they gone? They’re not doing the kind of higher value-added things they’d love to do if we were in a larger economic space.”

The CDB President underscored the importance of the Region working together to maximise the benefits of their SDR allocations, emphasising:

“It will call for us recognising that individually if we used our SDR allocations or even if we left it there, we are much worse off than we could be if we were to pool and now utilise those SDRs through the mechanism of leverage in a way that helps build the very capital markets we say we don’t have. But it calls for collaboration, cooperation in a regional sense.”

Guyanese are worried and deserve answers

Sun Oct 10 , 2021
Support Village Voice News With a Donation of Your Choice. Dear Editor, The death of 13-year-old Joshua Henry after taking the second dose of Pfizer vaccine should be of concern to every Guyanese, vaccinated or not. The recount given by the family that he went to take the vaccine unaccompanied by an adult is one such concern, because little Joshua […]