Shortly after Joseph Hamilton’s ascension to office as Minister of Labour he walked around this country making known that on his watch there will be respect for Labour Laws and workers’ rights. Whereas Hamilton’s intention might have been honourable, the fact he has not delivered speaks volumes of his government and perhaps their intention.

Under the Law, the Minister of Labour is the chief conciliator in bringing about resolution to industrial relations matters. To date the Minister’s actions have not caught up with his words, particularly for workplaces where Africans dominate and for trade unions that are led by Africans, apart from one who is actively supporting the People’s Progressive Party/Civic (PPP/C).

This nation bears witness to healthcare workers protesting for allowances, Personal Protective Equipment, among other benefits, to aid in the discharge of their duties as the Minister remained silent, and the state (employer) used the media to demonise the workers. He did not a damn thing to bring resolution to the matter and the only reason why he did so is because these workers are represented by the Guyana Public Service Union (GPSU).

Government refusal to negotiate with the GPSU for increased wages/salary and improved working conditions, as the nation bears witness to the President saying he will give public sector workers an increase in the absence of negotiating with the recognised union, is in breach of Section 23 (1) of the Trade Union Recognition Act and International Labour Organisation (ILO) Convention No. 151.

The current situation as it relates to government mandating vaccination, in the absence of embracing the Laws of Guyana and principles outlined by the World Health Organisation, has resulted in an impasse between the Government and the Guyana Trades Union Congress, the Guyana Teachers Union, and GPSU. Hamilton has failed to bring the parties to the table consistent with industrial relations practices that would lead to resolution.

Bauxite workers, who were employed by the Bauxite Company Guyana Incorporated (BCGI), were shafted with the payment of their terminal benefits. The matter was brought to the Minister’s attention more than twice and he has done nothing to bring the parties to the table for resolution. Though he is on record saying BCGI is not operating, by law the company still exists and has reduced scale operation at Aroaima. Hamilton is lying to the nation to keep African labour in economic limbo.

Government is executing its anti-opposition dictatorial agenda and Hamilton has become no more than a rubber stamp for the PPP. He is aiding their aggression towards citizens of Guyana. On one hand he jumps up and speaks glibly about his intolerance for the violation of laws and transgressing of rights. On the other hand, he is content to obey his masters and do nothing to enforce the laws of the land and protect workers’ rights, as his constitutional office binds him to.

President Irfaan Ali went to the United Nations (UN) the other day, stumbling all over his words, claiming his regime is committed to Reparative Justice for descendants of the enslaved.

Instead of trying to hoodwink the august body of the UN and the international community, Ali and his team should work in Guyana to make sure Africans of this current generation do not have their rights transgressed, their lands stolen by the state, and their children brutally murdered by agents of the state. They should show respect for collective bargaining that modern society and the UN embrace. These are not things being called for willy-nilly, they are enshrined in laws and conventions.
Let Ali deliver at home the justice that he called on the UN to deliver for the sufferings of African ancestors. Let him demonstrate to the UN they’re serious about rights and justice here. The evidence is being borne out daily that the regime is actively pursuing a programme to push certain section of our country into poverty or keep those in poverty there.

To those who claim the PPP is not engaged in racist practices, explain to this nation how it is every time when sugar and other workers under the leadership of GAWU take industrial action, within days Hamilton will make sure an audience is given to the union to have the matter resolved. Why is the beleaguered Guyana Sugar Corporation enjoying preferential treatment in every form in comparison to bauxite and others who keep the wheels of the government turning? Let them explain to this nation why.

As a trade unionist I begrudge no union or any worker getting their grievance resolved swiftly. What I am against is the double standards and rampant discrimination. Day by day Africans are not only being stripped of rights enshrined in laws, international conventions and declarations, but they are also being stripped daily of their dignity.

Effort by the PPP leadership to establish an ethnocracy in Guyana ignores the plurality of the country. And whereas Guyana does not have a Damascus or a road that can lead to there, Hamilton must take the scales from his eyes and see he is actively participating in the persecution of African labour.

Lindener gets US$1000 to kick-start own business

Sun Oct 3 , 2021
Support Village Voice News With a Donation of Your Choice. By Naomi Marshall A 29-year-old mother of three who is on a mission to change the way Guyanese store their foods, and to kick start her business she has secured a US$1,000 Grant after being crowned the winner of INFO 10’s Business Pitch Competition on Friday in Linden. But it […] 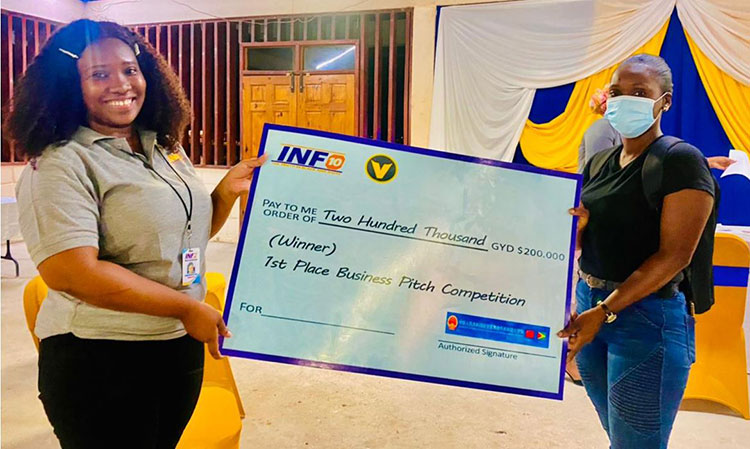