Trade unions or trade unionists, in principle, do not begrudge any employee or group of employees receiving an increase (raise) in pay at any time. What we may oppose is when that increase, raise or payout is being used as a wedge to divide the working class, and moreso in a situation where the racial overtones are evident.

In the specific case where Bharrat Jagdeo, last week, visited a sugar community and made an on-the-spot announcement that the Government will pay a quarter million dollars ($250,000.00) to each sugar worker severed by the Guyana Sugar Corporation (GuySuCo), is cause for grave concern. These workers, when they were terminated, received their Severance Benefits as per the Termination and Severance Pay Act, even though late and with interest paid, as ordered by the High Court.

There was no outstanding benefit due or owing to former sugar workers from their former employer or the state. As such, the quarter million dollar promised by Jagdeo to each unemployed sugar worker must be seen for what it truly is- a cash grant payout from the state in attempt to subdue former workers, after failing to reopen the estates, and to secure political loyalty.

There is also the contention about the number of unemployed workers to benefit from the payout. Whereas the Guyana Agricultural and General Workers Union (GAWU) is on record saying 7000 sugar workers were affected by the closure of estates during the A Partnership for National Unity and Alliance For Change (APNU+AFC) administration, GuySuCo said less than 5000 workers were laid off. This means there is a major discrepancy of over 2000 workers. $250,000.00 distributed to an unidentified additional 2000 plus workers will rob the coffers of the state a hefty sum of over $500 million.

This payout is a new precedent being set by the People’s Progressive Party/Civic (PPP/C), where a severed group of employees who received all benefits due them at severance are selectively given a further sum, and notably a very huge sum of money from the state. This is no more than a Cash Grant and an act of discrimination to other workers and vulnerable groups in this country.

What of similar cash grants for the hundreds of public sector workers that have been laid off since August 2020? They too are Guyanese and would have contributed to the development of this nation and the Treasury through sweat and taxation. What of the hundreds of bauxite workers from the Bauxite Company Guyana Incorporated (BCGI) who were terminated by the company, of which the Government of Guyana is a shareholder? Their status is no different than former sugar workers where the Government is the employer.

Bauxite workers’ termination benefits were miscalculated by the government part owned BCGI and they were paid less than they are entitled to. Several letters sent by the workers’ union, the Guyana Bauxite and General Workers Union (GB&GWU), to Minister of Labour Joe Hamilton to correct this economic injustice, to date have seen no effort by him to right this wrong.

We have seen many communities suffering from laid-off, COVID-19, flooding and the regime has shown no similar or other care or compassion to alleviate their hardships. Communities also affected by workers being laid off include the Kwakwani/Aroaima location with the wicked closure of BCGI mines. These communities were developed around and rely on bauxite. Must we to believe now that these residents and workers are not equally deserving as being communicated to us by this regime?

The quarter million cash grant given to former sugar workers should likewise be given to all former and current workers. We are all Guyanese and by law none is more equal than the other. No group of workers, employed or severed, is more entitled under the law to benefits not agreed to in their collective bargaining.

This regime continues its various acts of economic, social, and political discrimination. We must be incensed about this new form of discrimination and raise our voices in protest. We must see it for what it is- the regime is empowering one group over another group. This is another effort by the PPP/C to divide the country through its discriminatory policies and programmes. Only a selfish, wicked, and uncaring government would deliberately engage in actions to antagonise and divide workers and citizens.

This here stands the risk of pitting workers against workers, communities against communities, deprived against deprived, and it is not an accident but a carefully orchestrated action that Irfaan Ali must take full responsibility for. This is one of the most blatant forms of workers discrimination in the post independent history of Guyana.

And whereas Guyanese are aware that Ali is not his own man but rather a front for Jagdeo’s Third Term, this act has all the hallmarks of the draconian measures of he who holds the title of Vice President but is in fact the President and executing these divisive and provocative policies from behind. The Consolidated Fund being used by the Ali/Jagdeo regime, as though it is their personal bank account, belongs to the people of Guyana. All the affected are equally entitled to such Public Assistance in the form of Cash Grant given to former sugar workers.

Sun Oct 10 , 2021
Support Village Voice News With a Donation of Your Choice. Guyanese born, JUNE C. WOOD AGAMAH, MPH will on October 17 launcher new book: Caryl’s Closet at her childhood home in Friendship Village, East Coast Demerara. Agamah told the Village Voice News that she is excited to launch the book which chronicles her journey from the East Coast village to […] 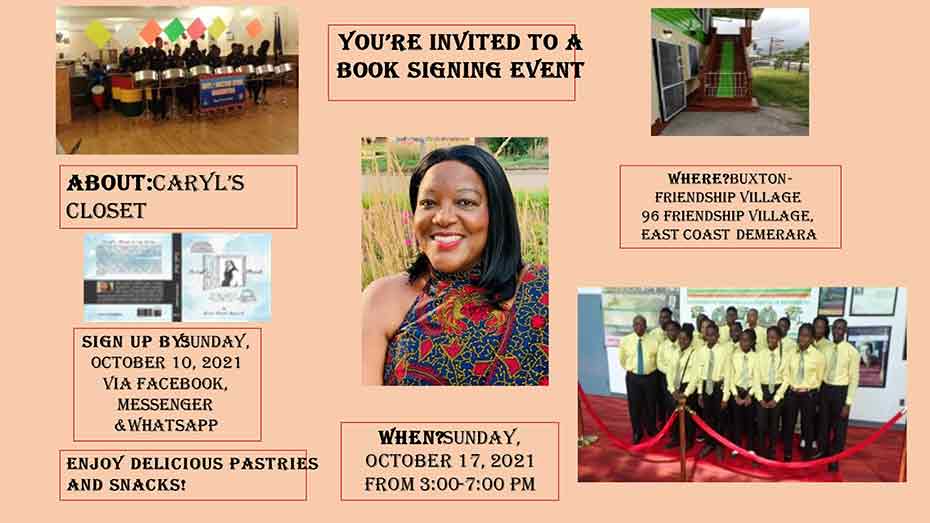