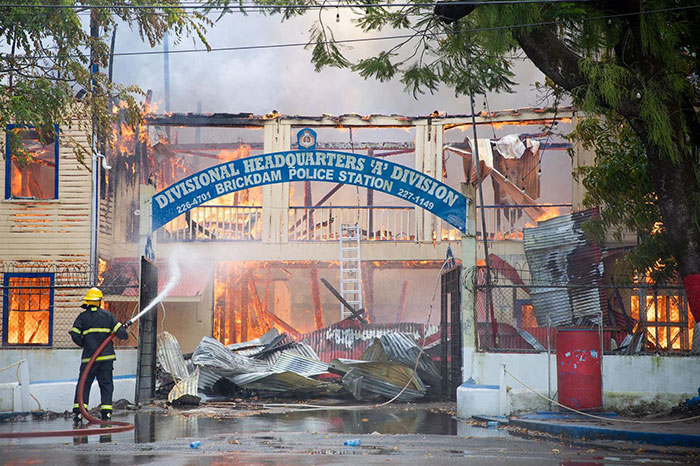 Sixteen prisoners and a number of police officers escaped unharmed from a massive fire, which erupted at the Brickdam Police Station on Saturday. The raging fire completely destroyed at least six departments and buildings within the compound, which housed key documents, and evidence in ongoing criminal matters.

The fire started at around 11:06hrs on Saturday in a room on the eastern end of the building. Fire fighters reportedly took five-to-six minutes to arrive on the scene by which time, the fire had already spread to other sections of the police station. The fire was seen as a threat to other buildings along Hadfield Street and even Brickdam, however, after hours of battling the raging flames, they managed to contain it.

After assessing the scene of the fire, Minister of Home Affairs Robeson Benn, during a press conference at his Brickdam Office, said the fire resulted in a “tremendous” loss to the Guyana Police Force.

The Home Affairs Minister said approximately 80% of the police station was destroyed by the fire. While commending the police officers on the ground, Minister Benn said “valid efforts” were made to take the 16 inmates to safety and to retrieve a number of the police files. Firearms, which are critical to the operation of the Guyana Police Force, were also secured.

However, he said further assessments would have to be made but initial reports indicate that vehicles and a number of exhibits were destroyed. “There is loss of vehicles, some equipment, some exhibits, both motorcycles and cars, and some other items which are exhibits,” Minister Benn said, while noting that some files would need to be reconstructed.

In the interim, he said systems are being put in place to ensure citizens within Central Georgetown have access to the police, and that safety and security are maintained within the Division. “We have been making efforts to restore operations as quickly as possible,” he said.

The Home Affairs Minister noted too that the Ministry of Home Affairs is already in search of a temporary building to carry out the operations of the police. He assured that a new edifice would be erected in time.

Commissioner of Police (ag), Nigel Hoppie told the press that the fire started on the “upper side of the eastern building” of the Brickdam Police Station. He said at the time of the fire, there were strong winds, which contributed to the fire spreading easily.

“The loss to say the least is very significant, however, that will not deter us,” Commissioner Hoppie said while noting that systems are already being put in place to ensure the safety and security of citizens within the Division.

He noted that once the building was on fire, steps were taken to firstly move the prisoners to safety, and then to secure guns and ammunitions which were kept at the police station.

“The next thing we did was to ensure that records were saved [but] we weren’t able to save all of the records,” he said while noting that the ranks on the ground were committed to the task. He said too that the majority of the vehicles destroyed belonged to the Force. The Police barracks and the lock-ups are among buildings which not destroyed by the fire.

Leader of the Opposition, Joseph Harmon, in a statement, said that he was saddened by the terrible fire, which has caused much devastation and the destruction of property and vital records.

“There are not enough words to express the shock when I think of implications for the nation’s public security,” Harmon said while saluting the firefighters and other members of the disciplined forces who despite the intense flames and danger to themselves, demonstrated professionalism in the most difficult of circumstances.

He said the fire should never have happened, and immediate actions should be taken to determine the cause.

“In doing, we must begin at the very top,” the Opposition Leader said.

He added: “Make no mistakes, this is a failure of leadership and the nation would be somewhat reassured by the immediate resignation of the Minister of Home Affairs. His and the government’s failures have been on display since August 2, 2020. Today marks another shameful milestone since their installation.”

The Opposition Leader said all and sundry must be held accountable.

The A Partnership for National Unity + Alliance For Change (APNU+AFC), in the short term, is demanding a full inventory and disclosure of what was destroyed by the fire, and an announcement of the plans to maintain public safety and security;

The coalition said, in the long term, there should be a Commission of Inquiry into the fire. Additionally, it is calling for the establishment of a mechanism to examine all aspects related to fire safety and review existing systems, including building codes.

“Further, there must be an immediate assessment of all the response mechanisms, as well as a review of the available equipment and the human resource capacity. This investigative mechanism must provide a comprehensive report,” Harmon said while noting that the findings must be made available for public scrutiny and immediate remedial action.

He also lobbied for the Fire Service Act to be reviewed and recommendations for modifications at the Parliamentary level must be made. “Since Guyana is moving towards an environment of transformation, new, comprehensive and creative legislative action must be introduced in relation to fire prevention and the safety of all Guyanese citizens,” Harmon said.

Sun Oct 3 , 2021
Support Village Voice News With a Donation of Your Choice. The Guyana Police Force would like to confirm that the two suspects in the alleged robbery attack and murder committed on electrician Joshua Denny were shot and killed this afternoon (Saturday October 2nd, 2021) in the vicinity of UG Access Road on the East Coast of Demerara. The two suspects […] 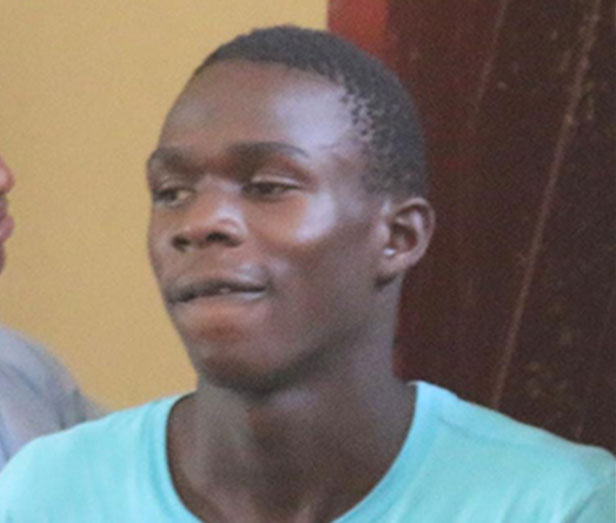