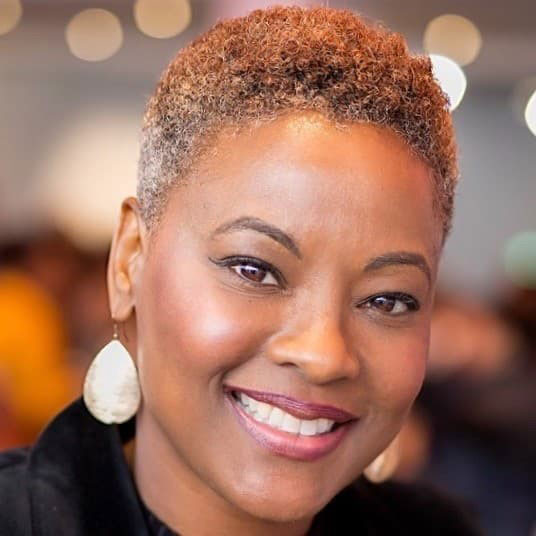 Growing Up
Samantha was born in Georgetown, Guyana on June 30, 1968. She attended St. Gabriel’s Primary School. At the age of eleven she moved to England with her parents, Sammy and Gwendolin Tross, and three siblings after her father, who worked with the Commonwealth Secretariat, was assigned a posting there.

In the United Kingdom (UK) she excelled in academia as well as sports. She was Britain’s national long jump champion and successful at A-Levels in applied mathematics, chemistry and biology. After high school she studied medicine at University College London, choosing to specialise in surgery.
In 1992 Samantha obtained a Bachelor of Medicine/Bachelor of Surgery degree from University College London, which allowed her to tread, as a trained intellectual equal, in a field historically dominated by men. She obtained training from London Teaching hospitals such as The Royal London, St George’s Hospital, and Guys & St Thomas’.

Professional Accolades and Distinctions
She holds the distinction of being the first Black woman Orthopaedic consultant surgeon in the United Kingdom, having been appointed to the position in 2005. She is amongst the 5 percent of women surgeons in that country and is the only female at Cromwell Hospital and Clementine Churchill Hospitals specialising in Lower Limb Arthroplasty. She is a member of both the Royal College of Surgeons of England and Edinburgh.
In 2016 she received the Black British Business Award for her community work, among other things. Samantha has been recognised as one of the 100 most influential Black Britons; and has regularly been included in the annual PowerList of the 100 most influential Black British people, with her most recent appearance on the 2021 Powerlist. Brief biography of her is included in the 2015 International Slavery Museum run Liverpool Museums, and in 2008 biography by Verna Wilkins.

Using technology and personal experience to make access easier for others
In this Technological Age, Samantha is helping others navigate their way in seeking the best medical care possible. In a Patient Journey App- https://patientjourneyapp.com/- speaking to the issue of Joint Replacement Surgery she noted that as a patient herself she experienced firsthand how overwhelming patient information can be.
In recounting her story she said: “I had to have spinal surgery. I received all of the information in the form of a booklet, and there was loads of paper to read through. Whilst I was happy with the depth of information I received, I didn’t like the way it was presented. And so I thought it’d be good if I could get rid of paper and replace it with an app. The app means that anywhere you are and at any time you can quickly get it up on your phone and refresh your memory, whereas you can’t walk around with a huge booklet!”
For her, “The app cuts down on what you have to say in the clinic and ensures nothing important is missed by the patient.”

According to her, her mission statement is: ‘Individualised treatment and provision of an excellent and efficient service at all times’. Apart from her clinical work, she has keen interest in teaching. She is an Examiner for Imperial College Medical School final examinations; external examiner for the University of the West Indies (Trinidad) medical school; Associate Professor of Orthopaedics for the American University of the Caribbean, Educational and Clinical Supervisor; and Faculty Group lead for Orthopaedics training at Ealing Hospital.
Samantha is also Associate Editor for the Journal of Medical Case Reports; Committee member of the British Hip Society; and a mentor for women and those from BAME (Black, Asian, and minority ethnic) background aspiring to a career in Medicine.
Source- internet

‘Is Guyana a democracy?’

Sat Sep 18 , 2021
Support Village Voice News With a Donation of Your Choice. September 15th is designated International day of Democracy by the United Nations and as is to be expected, counterfeit democrats in Guyana and worldwide have been rushing to vociferously pledge their commitment to democracy. Democracy’ is a ‘good’ that particularly in the social sphere is essential to the growth of […]