September 15th is designated International day of Democracy by the United Nations and as is to be expected, counterfeit democrats in Guyana and worldwide have been rushing to vociferously pledge their commitment to democracy. Democracy’ is a ‘good’ that particularly in the social sphere is essential to the growth of human freedom. Democracy then ‘is and always will be in some kind of crisis, for it is constantly redirecting its citizens’ gaze from a more or less unsatisfactory present toward a future of still unfulfilled possibilities’ (Guillermo O’Donnell, ‘The Perpetual Crises of Democracy,’ 2007 Journal of Democracy).

For decades, academic and other circles have recognised that the definition of ‘electoral democracy’ is too broad. ‘Even for the most commonly used large-N data sets—Freedom House and Polity—there is no consensus in the literature on where to draw the line between democracies and autocracies. And if we cannot measure democracy in sufficient detail and with the necessary nuance, we cannot mark its progress and setbacks or affect its future course’ (https://www.v-dem.net/media/filer_public/d3/62/d36263d7-029f-4749-8a9a-275d035c2f15/ regimes_of_the_ world_-_final.pdf). The Varieties of Democracy Project (V-Dem) is a relatively new effort aimed at measuring democracy more scientifically. It produces the largest global dataset on democracy with some 28 million data points for 202 countries from 1789 to 2019 and publishes the Liberal Democracy Index

2. The Liberal Democracy Index (LDI) captures both liberal and electoral aspects of democracy. It thus reflects a relatively ambitious idea of electoral democracy where a number of institutional features guarantee free and fair elections, freedom of association, freedom of expression, etc. and captures the limits placed on governments in terms of the protection of individual liberties and the checks and balances between institutions.

3. The Electoral Democracy Index (EDI) captures not only the extent to which regimes hold clean, free and fair elections, but also their actual freedom of expression, alternative sources of information and association, as well as male and female suffrage and the degree to which government policy is vested in elected political officials.

4. The Liberal Component Index (LCI) embodies the importance of protecting individual and minority rights against both the tyranny of the state and the tyranny of the majority. It also captures the effective checks and balances between institutions and in particular limits on the exercise of executive power. This requires strong rule of law, constitutionally protected civil liberties and an independent judiciary and strong parliament that are able to hold the executive to account and limit its powers.

5. The Egalitarian Component Index (ECI) measures to what extent all social groups enjoy equal capabilities to participate in the political arena. The egalitarian principle is fundamentally related to political participation, as systematic inequalities in the rights and resources of citizens of specific social groups limit capabilities to participate in the political and governing processes. Therefore, a more equal distribution of resources across groups results in political equality and hence democracy.

6. The Participatory Component Index (PCI) emphasizes active participation by citizens in all political processes – electoral and non-electoral. This takes into account four important aspects of citizen participation: civil society organizations, mechanisms of direct democracy and participation and representation through local and regional governments.

7. The Deliberative Component Index (DCI) captures to what extent the deliberative principle of democracy is achieved. It assesses the process by which decisions are reached in a polity. A deliberative process is one in which public reasoning focused on the common good motivates political decisions, as contrasted with emotional appeals, solidarity attachments, parochial interests or coercion. There should also be respectful dialogue at all levels – from preference formation to final decision – among informed and competent participants who are open to persuasion.

If at the end of 2020 Guyana was an electoral democracy veering towards an electoral autocracy what is it today where with its ethnically-based one seat majority, parliamentary accountability is negated, the legitimacy of the government is being legally questioned, there is no formal dialogue between government and opposition, and complaints of ethnic discrimination, unequal distribution of resources, political interference, regime autocratic behaviour etc. are rife?

Sat Sep 18 , 2021
Support Village Voice News With a Donation of Your Choice. By Rawle Lucas Five stocks in the Lucas Stock Index (LSI) traded this second period of September 2021 with one of them registering a loss and four of them registering no gain. The stock price of DDL fell 3.077 percent to G$126, resulting in a decline of G$3.013 billion in […] 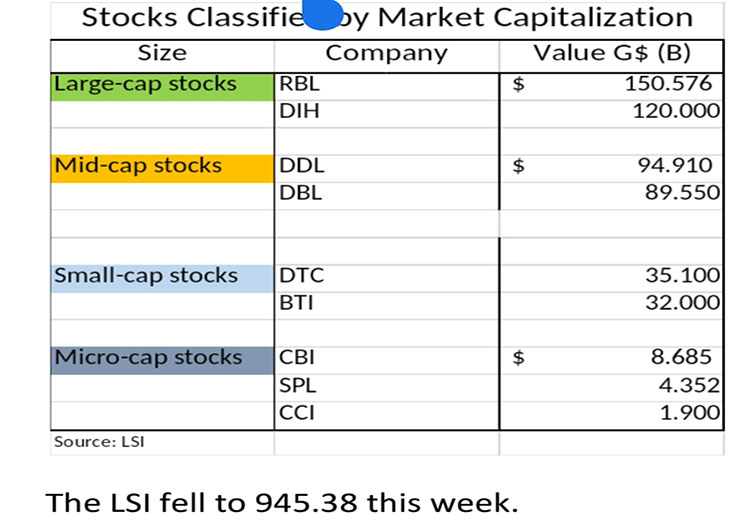