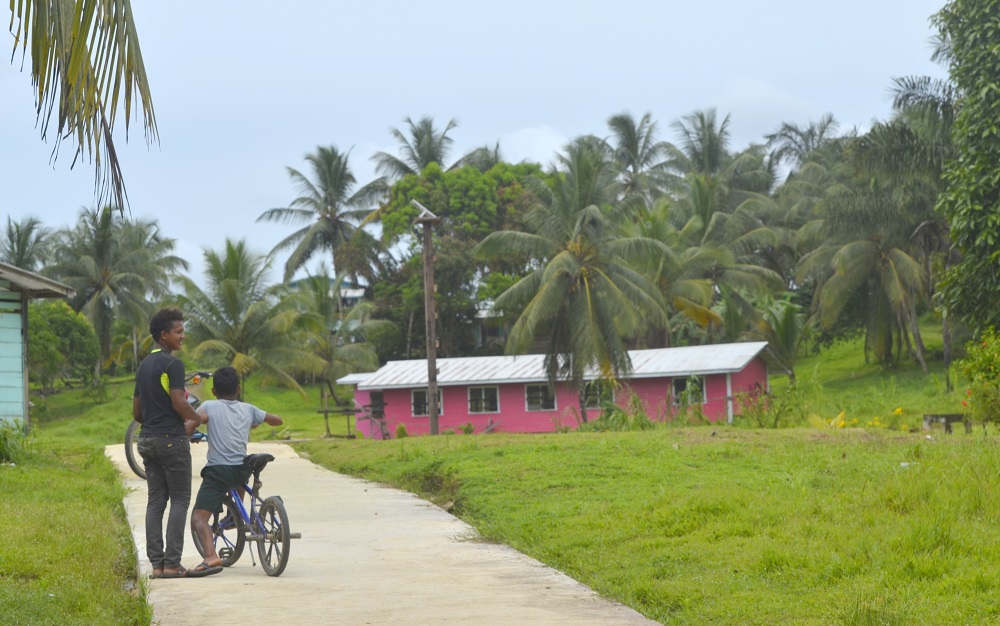 On arrival at Waikrebe, a small, remote indigenous village along the Barama River in the North West District, one can immediately sense the peaceful environment and togetherness within which the residents live.

The village , which was named after the nearby Waikrebe Creek,  a tributary of the Barama River, is located more than 20 miles from its nearest neighbour, another remote village called Santa Cruz. The latter sits at the intersection of the Barama and Waini Rivers.

Waikrebe is so remote that villagers would have to walk some three miles to a section of the village in order to receive mobile phone signal from a Digicel antenna at the riverside village of Kwebana, a few dozen miles away.

During a visit to Waikrebe last week, Toshao Derick Williams told the Village Voice News that there are approximately 266 residents at the village. He said that there are 54 families and he noted that the village is home to a  a primary school, a health post and a Christian church, called the New Testament Church. It is this church which has made the village famous within the region since a strong sense of religious beliefs guide the villages’ way of life. “Majority of the people attend the New Testament church,” Williams said as he sat at the doorway of a new building  which will house the church. It is slated for opening before Christmas this year.

“We don’t really get domestic abuse and such things here,” Williams said, noting that many persons work together to ensure that village life remains peaceful. According to residents, outsiders who may want to introduce alcohol and such products are immediately disciplined once the village council becomes aware of the presence of such products there.

Williams , who is said to be the youngest toshao elected to serve as head of the village, was elected leader at village elections held in May this year. He said that the main economic activity at Waikrebe is logging. The village , although small in population, has wide swathes of land within its boundaries, stretching several miles up the Barama River to Chinese Landing, another of its neighbours, and south along the Waini.

Almost every specie of soft and hard woods, including wallaba and the famous greenheart, can be found on the village lands. Williams noted that at the moment, the council is working towards sourcing a tractor which he said will greatly assist the village in marketing its logging activities. He said too that a portable sawmill is also much needed at the village and he noted that the villagers are working to pool together their monies  to purchase both items.

Reports are that the government, through the Ministry of Amerindian Affairs , had promised the village a tractor this year, however, a village councillor noted that recently when checks were made with the ministry, the villagers were told that Waikrebe was not on the list of recipients.

Nevertheless, residents noted that that their sense of cooperation is strong and they are determined to ensure the village secures a tractor in the months ahead.

Toshao Williams noted that besides logging there are no other forms of employment at the village and as such, persons would venture into the mining areas up the Barama River, such as at Chinese Landing and Koriako to look for work. “We want to venture into this logging in a more permanent basis whereby we can sell our log products to other communities and further ,” he added.

During a walk  around the village last Saturday, persons could be seen weeding grass at various parts of the village , even the women can be seen assisting their male counterparts in raking the grass. According to the toshao, there are days when residents are urged to take part in self-help activities and he noted that families would come out in their numbers.

It was noted that whenever the need arises, families would perform various tasks, such as cleaning the surroundings.

While enroute to Waikrebe last weekend , a number of boats  could be seen traversing the Barama River. One such boat, called a river shop, arrived at the village later that day. Another slowly passed by the mouth of the creek as it headed with drums of fuel up the Barama River .

Back at the village, the mobile shop moored along the landing. The boat houses several freezers which are stocked with chicken , beef and ice cream. A generator at the top of the boat provides power. At the back of the boat, bottles of cooking gas and cases of drinking water and fruits can be seen. The boat operator also sells snacks and other packet foods.

According to a resident, the boat operator is one of several who travel to the village and spend as much as a week while ensuring their  goods are sold. The link is seen as a valuable one as it would be an expensive venture for persons from the village to travel to Kwebana and Santa Rosa in order to source food items.

Although  Waikrebe is remote and visitors rarely travel there, the village council ensures that persons follow the COVID-19 protocols. Last March when the first cases of the pandemic were recorded in Guyana, the village was on lockdown and the residents ensured that they obeyed the nightly  curfew. Toshao Williams said that no case was recorded at the village and he noted that persons who travelled out had to ensure they take all the necessary precautions put in place by the authorities to stem the spread if the virus.

At the moment, the village has several small projects in its plans and they include extension of a walkway which leads from the water front to a hill at the top of the village.Thus far, some 420 feet has been concreted at a cost of $1.5M, monies made available through a presidential grant.

The village captain told the Village Voice newspaper that there are plans to construct a guest house as part of a tourism venture. There is a small waterfalls at a place called’ Blackwater Creek’ and the village captain noted that plans are afoot to ensure the waterway leading to the falls is more accessible to visitors. He said too that there are nature scenes as well as the three-mile road which leads to the Barama River. Persons would walk along this route in order to get mobile phone signal.

The health post at Waikrebe is considered very important since many patients from villages further up the river such as Chinese Landing , would be sent there for medical attention. Last week a baby was delivered at Waikrebe and according to the village leader, the facility is manned by a Community Health Worker or CHW. Residents, mainly the women, noted that a doctor is needed at the facility since it is frequented by many high risk health cases. “Sometimes the CHW would send a patient from another village here for our CHW to look after, “ Toshao Williams said.

As the sun dipped in the horizon over the village last Saturday, the children came out the play at the waterfront and while come purchases ice-cream, others rode their bicycles up and down the concrete strip. The peace and quiet at this small village is evident to any first time visitor and according to Toshao Williams, the residents will continue to ensure that this trend is passed down to many generations.

Mon Sep 13 , 2021
Support Village Voice News With a Donation of Your Choice. …but insists naysayers won’t discourage her Town Clerk of Georgetown (ag) Candace Nelson said on Friday that while she has not had a warm welcome to the post at the Mayor and City Council (M&CC) since her July appointment, she remains unfazed and focused on conducting her duties and hopes […]