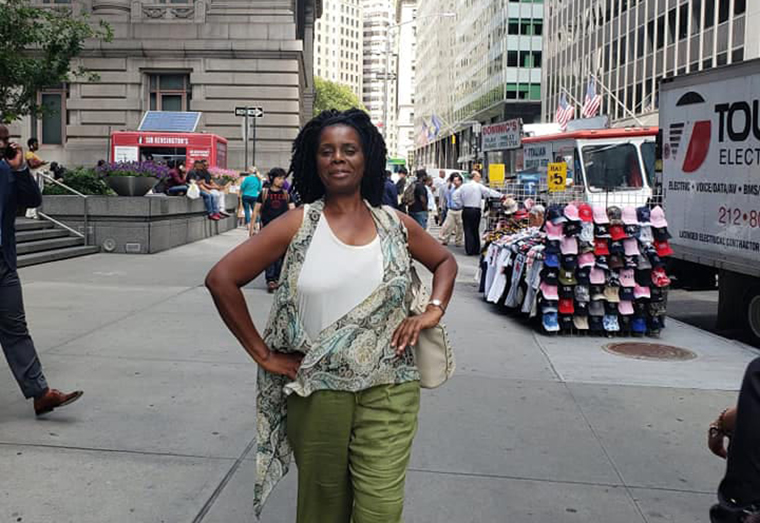 Fifty-six-year-old Vanessa Maynard – a nurse for 38-years – endured a horrifying experience at the Infectious Diseases Hospital at Liliendaal before she lost her battle with COVID, coupled with other comorbidities.

According to her family, a much needed CT scan was never facilitated, and on her sick bed, Nurse Maynard had to bribe medical personnel at the Infectious Diseases Hospital to receive assistance.

Nurse Maynard died in the COVID Intensive Care Unit (ICU) at the Infectious Diseases Hospital on Thursday, September 9, approximately 11 days after she was admitted to the medical institution.

During a press conference hosted by the Leader of the Opposition (ag) Roysdale Forde, Maynard’s daughter Keneisha Carryl and other relatives shared details of the nurse’s experience up to the time of her death.

According to Carryl, her mother, a diabetic, was taken to the Georgetown Public Hospital at around 13:00hrs on Sunday, August 29, 2021 after feeling unwell. There, a number of tests were conducted, and it was not until 22:00hrs that day, she was transferred to the Liliendaal Hospital.

At the time of Nurse Maynard’s transfer, she had an abscess, which the nurses at GPHC assured, would be attended to upon her arrival at the Liliendaal Hospital, but, it took nurses there more than a day to clean the infected area.

With tears in her eyes, Nurse Maynard reportedly told the nurses at the Liliendaal Hospital that she would change the wound dressing herself if provided with the gauze and the iodine. “She told them, I am a nurse, just bring the gauze, just bring the iodine, I’ll do it myself, because when she opened the bandage, she saw that it was green. It had become infected,” her daughter detailed.

One of Nurse Maynard’s nieces, who identified herself as ‘Kizzy,’ said her aunt on a daily basis updated her family on the quality of healthcare she was receiving at the Liliendaal Hospital. “My aunty was a nurse, so naturally, once she was admitted into that hospital she started observing the inept care and treatment that was being given to her and other patients in the facility. Every day, she would send us voice notes in real time just keeping us abreast,” Kizzy said.

According to Kizzy, upon Nurse Maynard’s arrival at the Infectious Diseases Hospital on August 29, there was no initial assessment or clinical documentation done. “She was just placed on a bed and that was it,” the woman contended.

According to her, it was not until August 30 – the following day – that her vitals were taken and oxygen administered. “When they gave her oxygen, the saturation levels were fluctuating, that’s number one. Number two, the mask for the oxygen tank, it was a small mask, one suitable for a child, not an adult. So naturally she is having to exasperate her lungs by breathing even more heavily through that little mask. There were several instances, where her urine was concentrated because the nurses were not coming on a regular basis to change the bed pans, nor were they emptying the colostomy bags for my aunt or any of the other patients there,” Kizzy contended.

According to the woman, her aunt reportedly bribed nurses at the hospital to warm up her food and escort her to the bathroom.

By September 3, Nurse Maynard was informed that she would need to undergo a CT Scan at the St. Joseph Mercy’s Hospital, and though her family paid $60,000 to have the scan done, it was never executed.

For several days, Nurse Maynard waited to be taken to the St. Joseph Mercy’s Hospital but was repeatedly told that the ambulance had left.

“They prepped her, they wheeled her out to the yard, and she was in the yard for several hours unattended; she was told, ‘oh we’re so sorry, the ambulance left. The second day, the same thing happened. They prepped her, took her to the yard unattended, several hours later, we are so sorry, the ambulance left…On the third day, they did have an ambulance available but they told her that to successfully transport her from Liliendaal to Mercy then back to Liliendaal, they would need an oxygen tank that can take at least 10 liters of oxygen, the tank only had 8, so they weren’t confident that the transport back and forth would be successful, so she was unable to get that CT scan,” Kizzy explained.

Kizzy said though her aunt was diabetic, she was given regular food which led to her aunt’s sugar level increasing. “The care was just all over the place…it was not strategic, it was not appropriately outlined and there wasn’t any dedication or compassion to treating my aunt and making sure she was comfortable,” Kizzy contended.

Leader of the Opposition (ag), Roysdale Forde, while extending condolences to Nurse Maynard’s family, expressed disappointment in the level of care she received.

“This entire episode, sadly, underlines the failure of the installed government’s ad hoc plan to combat the spread of COVID and reduce its impact on our population. It also underscores why the No Confidence Motion against the Minister of Health is not only necessary but urgent. The health sector is near collapse and is certainly in a state of crisis and ruin,” MP Forde told the press.

He said the APNU+AFC Coalition is deeply worried about the state of health care in Guyana. APNU+AFC Member of Parliament and former Minister within the Ministry of Health, Dr. Karen Cummings said it was with deep shock that she learnt of the passing of a close friend. Like, Forde, she too expressed condolences to family of Nurse Maynard.

Returning to the Self-Sufficiency

Sat Sep 11 , 2021
Support Village Voice News With a Donation of Your Choice. Increasing prices for vegetables, poultry, meat, eggs, and other essential food items should force an examination of ways to achieve some form of self-sufficiency. Wages and salaries are not keeping pace with the increases in prices which is making it harder for the average person to be able to prepare […]