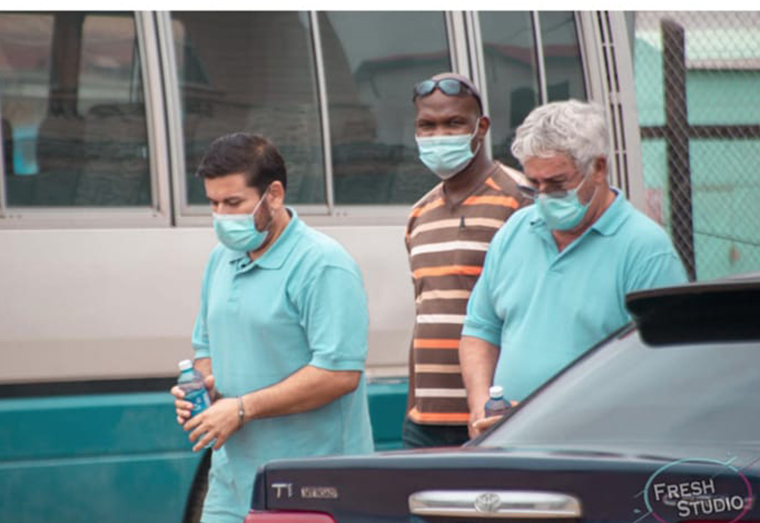 Attorney General and Minister of Legal Affairs, Anil Nandlall has challenged Senior Magistrate Alex Moore’s decision to grant bail to two Brazilian nationals – Andre Luiz Pereira and Salen Nobrega DeAlencar – who were found with more than 1000 pounds of cocaine in a foreign aircraft at Orealla last May.

In two Fixed Date Applications (FDA) filed in the High Court, the Attorney General asked the Court to grant two orders of certiorari to quash the decision of the Senior Magistrate to grant the alleged drug traffickers bail.

Senior Magistratre Moore, on July 22, 2021, granted Pereira and DeAlencar bail to the tune of $3M each for the offence of possession of narcotic for the purpose of trafficking and an additional bail of $50,000 each for illegally entering Guyana by air contrary to the Immigration Act.

The Attorney General is also seeking two orders to stay or suspend the decision of the Senior Magistrate, who at the time, was presiding over the Springlands Magistrate’s Counc, in the Corentyne Magisterial District.

The Attorney General is also seeking conservatory orders staying or suspending the decision of Senior Magistrate Moore to grant the Brazilian nationals bail on both offences – drug trafficking and illegal entry into Guyana.

In presenting the High Court with the facts, the Attorney General explained that on May 20, 2021 police officers at the Orealla Regional Division No. 6 discovered an aircraft bearing registration No. PT SRR.

He said upon inspection, the police found a large quantity of a substance suspected to be narcotics. When weighed, it amounted to 1,178.95 pounds or 535.8kg of cocaine.

“Two (2) male individuals, namely, Salem Nobrega De Alencar, the pilot of the said aircraft and the Second Named Respondent, Co-pilot, were interviewed and investigations revealed that said individuals had allegedly flown from Brazil to Venezuela and thereafter subsequently landed in Guyana without authorisation from the Civil Aviation Authority,” the Attorney General explained.

He noted that De Alencar and Pereira were arrested, an investigation was launched, and legal advice was sought from the Director of Public Prosecutions (the “DPP”).

Upon the instructions of the DPP, the suspected drug traffickers were charged on May 22, 2021 with drug trafficking and illegal entry. When they appeared before Senior Magistrate Moore, the men pleaded not guilty to both charges. Their subsequent appearances resulted in them securing bail.

Thu Aug 19 , 2021
Support Village Voice News With a Donation of Your Choice. A Reuters’ story out of Texas (August 17, 2021) reported Vice President Bharrat Jagdeo saying the Government of Guyana will renegotiate the oil and gas profit-sharing agreement (PSA). He reportedly made the announcement on the sidelines of the Offshore Technology Conference in Houston, Texas, USA that Guyana is attending. This […]