Democracy is a much abused word in Guyanese society. For some democracy is being in charge of government whether the position is acquired through foul or fair means. It is not unusual to hear when some are out of office democracy does not exist even if they have lost an election fair and square. The 2020 National and Regional Elections have taught Guyanese many lessons. Lessons to be learned not discarded or ignored.

Those elections have taught electoral democracy is not what many expect and the role of forces, internal and external, in distorting or reinterpreting same. People are also taught that in the new oil rich Guyana democracy will be defined by who can shout the loudest, threatened the most, too timid or compromised to do the right thing, or could form alliances with the powerful to achieve a political end.

The 2020 Election in Guyana will be debated for years to come. In time, when the partisan or uninformed passion cools or the voices of reason and repute are paid attention to, it will be accepted that the so-called mother of all elections was marred in the greatest controversy ever.  People will recognise the precedents set in last year’s elections may haunt Guyana forever or necessitate the creation of a new electoral regime.

It may also be realised, and accepted, the various acts of inconsistencies in holding some accountable as others walk away scotch free. Some Guyanese may be fooled for now but the major players behind the scene are not, and may very well feel comfortable they have us fooled. For instance, some in the diplomatic community will sit silently, even smirk, at the plaudits they are receiving for ‘saving’ Guyana’s democracy.  They know in the world of diplomacy, on the surface and hidden, using a carrot or big stick, what power could be wielded and used to achieve a particular end. In so far as they can say mission accomplished, diplomacy has succeeded.

In the diplomatic world there are very few retired General Colin Powell, United States (U.S) Chairman of the Joint Chiefs of Staff, and former Secretary of State. Few like him, in their lifetime, would admit they were used and misled. His was the case of the vial he presented to the United Nations, as evidence of Weapon of Mass Destruction, to seek support for the U.S to invade oil-rich Iraq and dispose of President Saddam Hussein.

When the invasion was accomplished, the oil wells commandeered by American business interests, a government friendly to such interests was installed, Iraq was declared a democratic state. The stories of Iraq and the Iraqis are still being told. Some politicians who supported and provided authorisation to then President George W. Bush has since rethought their position and what their support has caused the country and people.

The Iraq story is not dissimilar to oil-rich Libya and many others. On the surface they may appear different, but to the movers and shakers, local and foreign, they are the same.- the claim to democracy defined by those who used the word to achieve selfish not indigenous national interest. A claim that is unashamed to disrupt and refashion the social order even if it results in violence, chaos, division and disorder after.

GECOM says Lowenfield, others to get full benefits 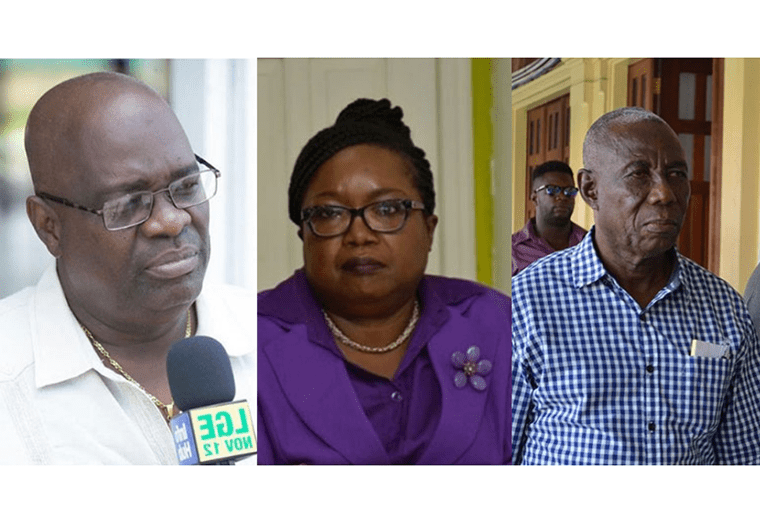