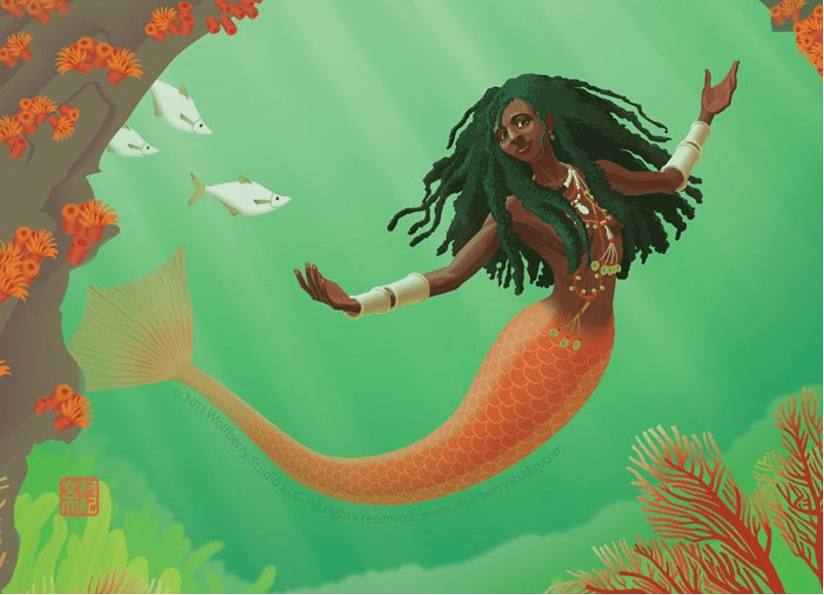 Children grew up to stories of the mermaid but often, if not only, heard tales from a Western perspective. Reaction or rejection about Disney using a black actress (Halle Bailey) to star in The Little Mermaid has stimulated conversations about the mermaid’s origin and what this half- woman half-fish represents. It is being argued the mermaid (mami water) is part of African folklore and predates Western folklore. As Guyanese, having the benefit of both African and Western folklore influences here’s a fascinating tale of the mermaid: –

Mami Wata, the most celebrated mermaid-like deity from Africa who crossed over to the West

Despite being considered as an adaptation of the Western Mermaid, Mami Wata is a deity that has existed in Africa for as long as African history and culture can recollect. The half-fish half-human female water spirit is highly respected, feared and worshipped presenting a balance between dark, divine, mysterious and angelic existence.

The deity is believed to be a woman with a half-human and half-fish appearance with the ability to transform wholly into any form of her choice. The deity could also take up the form of half-human half-snake. Her upper body is that of a woman while her lower body is a fish with a tail.

Mami Wata is often presented with long healthy hair, enviable beauty and a dark yet appealing mysteriousness. Her human features appear similar to that of the women in the areas in which she is.

Mami Wata traces back to the earliest of African societies as recorded by the griots and keepers of history. The Dogon’s creation myth tells the stories of Mami Wata and traces records of its existence to more than 4000 years ago. Mesopotamian myths also tell of the great water goddess in their story of creation known as Mami Aruru to be the creator of life.

The name is traced to the early languages of many modern African societies today. The first root of its name is considered to be from Ethiopian and Egyptian Coptic societies. In the Ethiopian Coptic language, the word “mama” was used as a description of truth and wisdom and the term “uat-ur” meant ocean water. Another definition of the name traces to the early Sudanese society where the word wata referred to a woman. The name is often linked to a single entity but represents the strongest and most significant of all water spirits that exist.

Mami Wata was developed from the African culture that believed in the existence and worship of mystical creatures. Mami Wata is the bigger goddess with smaller followers some of which were also men and had the same appearance as their goddess. Stories are told of her followers coming to shore every now and then to deceive seamen and capture them to be taken in the water kingdom. The captives were a source of entertainment until they were offered as sacrifices to her.

The African deity has managed to find homes in many other societies in the western world. In the Caribbean and parts of Southern America, the deity is highly respected and feared with many stories around her identity. Many cultures till date worship the deity and train high priestesses who serve as a link between the people and their deity.

The role of the strikingly beautiful goddess is to provide spiritual and material healing to her worshippers, while also protecting their emotional and mental health and growth. She is the protector of the water bodies. Many traditional groups in Africa till today do not go to the beach or fish on certain days in order to provide peace to the water deity’s home.

For women, she is a giver of fertility and protector of women and children. Mami Wata has a soft spot for women who have suffered abuse. The deity is also a provider of wealth and riches to her loyal worshippers and admirers and blesses children with beauty (often time the beauty is said to be a destructive tool to the girls).

But the deity possesses evil as much as she possesses good. Many men have been said to be captured by the deity for her own sexual satisfaction. Sometimes the men are left lifeless to be buried by the living or their bodies are never found. Women who are not humble because they have been blessed with beauty are often left baren or without a man until they compensate the deity.

Mami Wata also has very strong sexual powers of sex starvation, seduction and lust. In the Nigerian tradition, Mami Wata seduces men and reveals herself to him after sexual intimacy. The man is made to swear faithfulness to the deity or die. Any man that rejected her offer is said to suffer sudden death, poverty and destruction to his family if he is married. The deity is also known to have a terrible temper and jealously issues.

Mami Water in Western societies
For many Africans who find themselves in the Western world, specifically in the Caribbean and Southern America, the deity is said to have travelled with them on the Atlantic Ocean protecting them and taking some of their pain to relieve them. She is said to have capsized many slave ships that do not make it to their western destinations especially during the abolition of the slave trade.

She emerged as human many times to the slaves often as a beautiful girl who dies at a very young age. This was her way of protecting her people who were no longer close to water bodies. By appearing in human form in between decades, she reminded the slaves that she had not forsaken them. For many Africans communities in areas like the Dominican Republic, Haiti and Brazil she emerged to the people as Lasirèn, Yemanja, Santa Marta la Dominadora, and Oxum.

Mami Wata appears in many children stories as a mystical character who often brings good or bad luck depending on one’s character. Many are warned to resist the seductive charms of the deity believing that if one can resist Mami Wata, they can live long and endure life’s obstacles.

Mami Wata found her way into western societies by the 15th century when the sailors who mixed with the indigenous Africans and slaves found their way into their lands. In Western culture, she is referred to as a mermaid with beautiful features.

Today, many Western scholars believe that Mami Wata is a pidgin adaptation of the word mermaid adapted by African societies.

Britain- the untold story of the greatest slaving nation in history

Sat Aug 7 , 2021
Support Village Voice News With a Donation of Your Choice. This is the untold story of the greatest slaving nation in history. The Slave Trade transformed Britain into the ruler of the waves and saw the beginnings of British Empire which along the way birthed modern racism. The standard of living British grew accustomed to was built on the cruelty […] 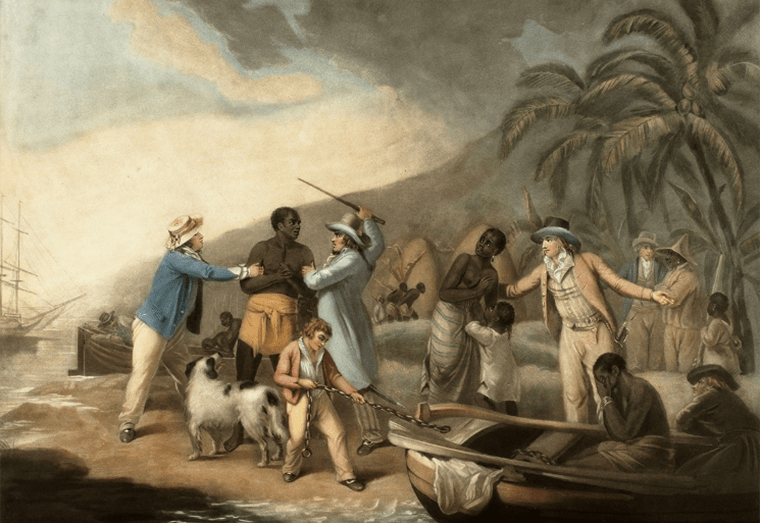