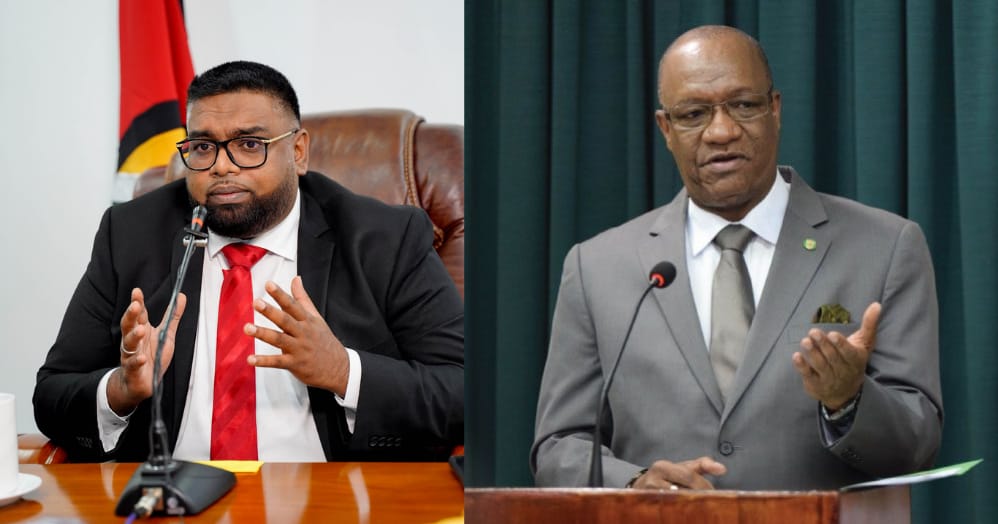 Leader of the Opposition Joseph Harmon has once again signaled his willingness to consult with President Irfaan Ali on the appointment of the Chief Justice and Chancellor of the Judiciary as prescribed by the Constitution but the President is maintaining that the Opposition must first recognise his Government as legitimate.

Monday marked one year since the two leaders have been at loggerheads. The Constitution of Guyana specifically requires that there be consultation with the Leader of the Opposition by the President in the appointment of a number of constitutional officer holders. Article 127 of the Constitution requires that agreements be reached between the President and the Opposition Leader for the appointment of the Chancellor and the Chief Justice.

However, when the issue surfaced during a virtual press conference on Monday, the President maintained his long held position.  “As you are aware, the Leader of the Opposition has still not issued any statement recognising the legitimacy of the government, so I don’t know who I am consulting with,” President Ali said.

While, the President earlier this year accepted the Opposition’s nominees for the Local Government Commission, he said the situation is not the same in the case of the Chancellor and the Chief Justice.

The President said he is hopeful that the Opposition Leader would stop making “reckless statements” about the People’s Progressive Party/Civic (PPP/C) Government.

But in a statement issued hours after, the Opposition Leader though committing to meet with President Ali, said the president’s insecurities cannot be resolved by him.

“I feel pity and sorrow for Mr. Ali who is clearly suffering from confusion and insecurity about his stature,” Harmon said.

He nonetheless made his position clear.
“I wish to categorically state, once again, that I am ready, willing and able to engage in consultation on this matter at the earliest opportunity. I am prepared to meet with President Ali for consultation this week, as early as tomorrow, if he is so inclined.

However, President Ali’s imposition of unrealistic, unnecessary and outrageous extra-constitutional conditionalities is clearly an attempt to further stall the appointment of a substantive Chancellor and Chief Justice,” the Opposition Leader said in a statement.

Harmon said it is clear that the PPP/C Government does not want the substantive appointments to be made. “It was the PPP, in government and in opposition, which has engaged in political intransigence that has caused Guyana to be without a substantive Chancellor and Chief Justice for decades,” Harmon said.

Turning to his attention to the President’s demand to be recognised as legitimate, Harmon said it would appear that President Ali is uncertain of his status as President and is seeking validation. “Perhaps he is acutely aware that even as he acts, he does so not of his own free will and volition but at the behest of his handler. Mr Ali’s insecurities cannot be resolved by me, but he must look to Pradoville 2 to release him from whatever constraints and bondage he finds himself in,” Harmon said.

Tue Aug 3 , 2021
Support Village Voice News With a Donation of Your Choice. Twenty-three-year-old Stephon Wayne Major drowned on Monday during a outing at Buc Town, Linden. Police said the 23-year-old of Self Help Scheme, Amelia’s Ward, Linden was in the company of friends around 13:00 hours when they went to swim at Buck Town. Upon arrival, they began consuming alcohol, after which […]