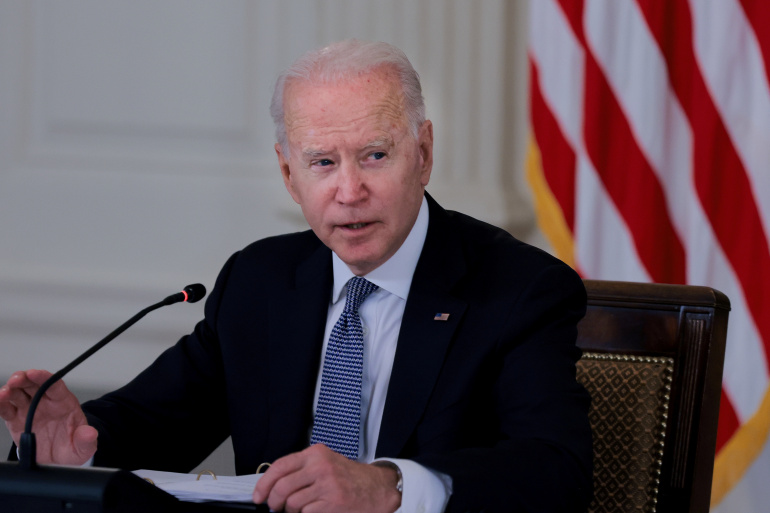 WASHINGTON, July 30 (Reuters) – The United States imposed sanctions on the Cuban police force and two of its leaders on Friday in response to the Havana government’s crackdown on protesters, and President Joe Biden promised Cuban-American leaders more actions were coming.

The U.S. Treasury Department said the sanctions, which appeared to be largely symbolic, were a reaction to “actions to suppress peaceful, pro-democratic protests in Cuba that began on July 11.”

Targets of the sanctions are two Cuban police force leaders, as well as the Cuban interior ministry’s national police force, the department said.

“There will be more, unless there’s some drastic change in Cuba, which I don’t anticipate,” Biden said during a meeting with Cuban-American leaders at the White House.

His meeting came as the politically important community calls for more support for protests in Cuba that represent the biggest populist outpouring against the government on the Communist-run island in decades.

“The United States is taking concerted action to bolster the cause of the Cuban people,” said Biden.

Biden said he had asked the Treasury and State departments to report back in a month on how to allow remittance payments from Americans to Cubans without the Cuban government profiting.

In addition, Biden has been working on a plan to try to provide wireless communications to Cubans and augment U.S. embassy staff in Cuba, a senior administration official said.

The protests erupted this month amid Cuba’s worst economic crisis since the fall of its old Soviet Union ally and a record surge in coronavirus infections. Thousands took to the streets, angry over shortages of basic goods, curbs on civil liberties, and the authorities’ handling of the pandemic.

Cuban President Miguel Diaz-Canel has blamed the unrest on the United States, which in recent years has tightened its decades-old trade embargo on the island. He has said many protesters were sincere but manipulated by U.S.-orchestrated social media campaigns.

Last week, the U.S. Treasury announced sanctions on Cuba’s defense minister and an interior ministry special forces unit over allegations of human rights abuses in the crackdown that followed the protests, which saw hundreds of activists detained.

Republicans and Democrats on Capitol Hill have urged more measures.

Participants in Friday’s meeting included Yotuel Romero, a hip hop musician and author of “Patria y Vida,” a song that has become the anthem for the protesters; Ana Sofia Pelaez, founder of the Miami Freedom Project; and former Miami Mayor Manny Diaz.

“I think if Biden has a successful Cuban policy that is able to put the regime on the defensive and provide concrete support to Cubans, that will benefit him with voters in Florida,” said John Suarez, executive director of the Center for a Free Cuba. “If the regime collapses on his watch, that could be a game changer.”

Guennady Rodriguez, 40, who said he moved to Miami from Cuba in 2013, said he thought Biden had moved too slowly in addressing Cuban policy in the months before the protests. The Biden administration has been engaged in a lengthy review of the Cuban policy it inherited from the Donald Trump administration.

“Biden has put himself in a lose-lose position. Now it is going to be more difficult for him to select an engagement policy,” he said.

Alejandro Ortiz, 32, who also moved to Miami from Cuba, said he thought Biden’s response to the Cuban government after the protests was too slow.  “I see an attitude that is a little passive,” he said. “He needed to be faster and more severe with his measures.”

'The war has changed,'

Sun Aug 1 , 2021
Support Village Voice News With a Donation of Your Choice. – CDC says, calling for new response to Delta variant  July 30 (Reuters) – The war against COVID-19 has changed because of the highly contagious Delta variant, the U.S. Centers for Disease Control said, proposing a clearer message, mandatory vaccines for health workers and a return to universal masking. An […]