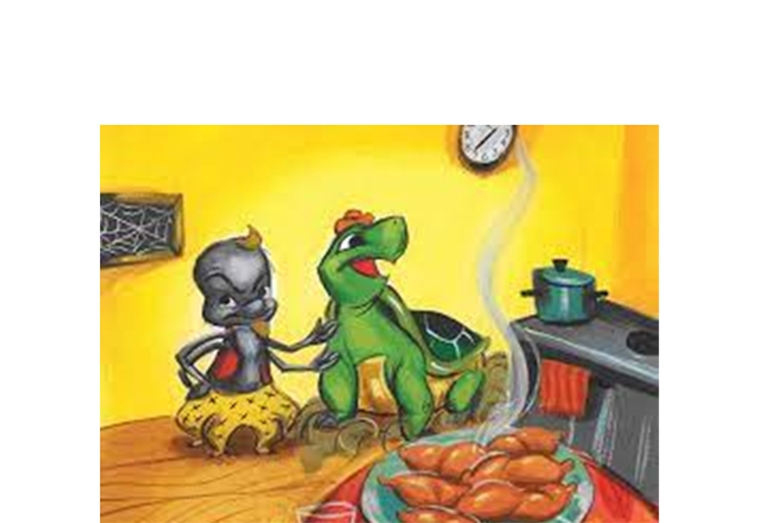 One day Anansi the spider picked some very fat and tasty yams from his garden. He baked them with much care and they came out smelling quite delicious. He could not wait to sit down and eat them. Just then there was a knock at his door. It was Turtle, who had been traveling all day and was very tired and hungry.

“Hello, Anansi,” said Turtle. “I have been walking for so long, and I smelled the most delicious yams I’ve ever smelled. Would you be so kind as to share your meal with me?” Anansi could not refuse, as it was the custom in his country to share your meal with visitors at mealtime. But he was not very happy, for Anansi was a little too greedy and wanted the delicious yams all to himself. So Anansi thought to himself and came up with a scheme.

“Please do come in, Turtle. I would be honored to have you as my guest this evening. Sit down, have a chair and help yourself.” Turtle came inside and sat down, but just as he reached for a yam, Anansi yelled, “Turtle, don’t you know better than to come to the table with dirty hands?”

Turtle looked down at his hands and saw that they were filthy. He had been crawling all day and had not had a chance to clean up. Turtle got up and went to the river to clean his feet. He walked all the way back up to the house and Anansi had already begun to eat. “I didn’t want these tasty yams to get cold, so I had to begin,” said Anansi. “But please do join me now, Turtle.”

Turtle sat down again and reached for a yam, but again Anansi yelled at him. “Turtle, did you not hear me before? It is not polite to come to the table with dirty hands!” He looked down and saw that his clean hands had turned dirty once more, since he had to crawl on them to get back to the house. So he walked down to the river once more to wash himself off. And when he returned this time, he was careful to walk on the grass so his hands would stay clean.

But by the time he sat down at the table, Anansi had finished up the last bit of the tasty yams and not so much as a morsel was left. Turtle looked at Anansi for a moment and then said, “Thank you for sharing your meal with me. If you ever find yourself near my house, please let me return the favor.” And then he slowly walked out the door and continued on his way.

The days went by and Anansi thought more and more of that meal that Turtle had offered. He got more and more interested in a free dinner and finally could not stand it anymore. He set off one day to find Turtle’s house. He found Turtle sunning himself on a riverbank just around dinnertime. Turtle looked up and saw him and said, “Hello, Anansi, have you come to share evening meal with me?”

“Oh yes, yes!” said Anansi, who was growing hungrier and hungrier by the minute. Turtle went underwater to his house to set up the dinner table for the two of them. Soon he came back to the bank and said, “Your place is waiting and the food is ready. Please join me, Anansi.” And then he dived underwater and began to slowly eat his meal.

Anansi jumped into the water, but could not get down to the bottom of the river. He tried to swim down, but he was so light that he kept popping back up to the surface. He tried diving. He tried belly flops. He tried a running jump, but nothing would help him get down to the river bottom. In the meantime, Turtle was slowly eating his meal.

Anansi was not about to give up a free meal, and was running around wondering what he would do. Finally he had an idea. He started grabbing stones and rocks and stuffed them into his jacket pockets. Now when he jumped into the water he sank right down to the bottom and was able to take his place at the table.

The table was so beautiful and full of delicious foods. Anansi could hardly believe how many tasty foods were before him and could not wait to start his meal. But just as he reached for the first morsel, Turtle stopped eating and spoke. “In my country, we do not wear our jackets to the table.”

Anansi noticed that Turtle had removed his own jacket before sitting down. Anansi started to remove his jacket, and as soon as it was off of his shoulders, he went zooming back up to the surface and popped out onto the riverbank. He stuck his head down into the water and saw Turtle slowly enjoying that wonderful banquet.

Moral of the story: When you try to outsmart someone, you may find that you’re the one who has been outsmarted.

Background- Anansi is a folk-hero to the Ashanti tribe of West Africa, where many of the enslaved people of the Caribbean came from. This funny fellow is a loveable rogue and is prone to think he could outsmart others. Sometimes he succeeds. Sometimes he’s outsmarted.

Sat Jul 31 , 2021
Support Village Voice News With a Donation of Your Choice. Free education from Nursery to University has been a right of every Guyanese child since 1976. In spite of this constitutional mandate the right to free university education has been denied since the mid-1990s with promises made by successive governments to return a right that should have never been taken […]