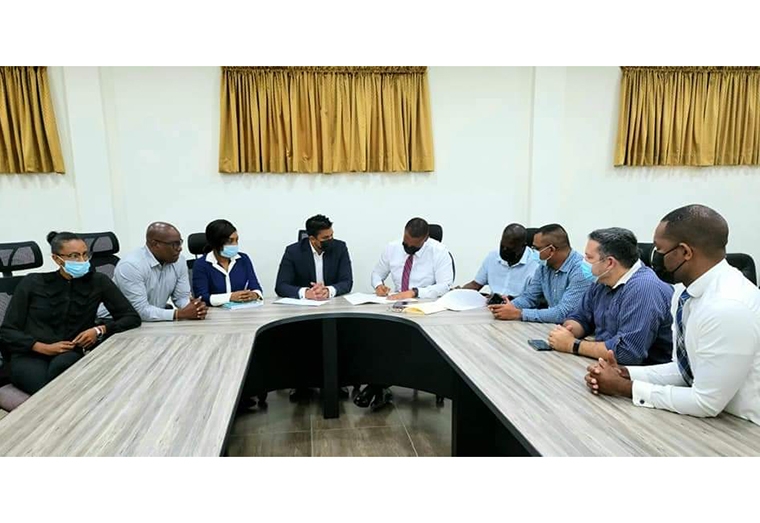 On Monday, the National Sports Commission (NSC) entered into an agreement of sale for the land on Mandela Avenue vested in the NSC to Cevons Waste Management Inc.

There has been some controversy surrounding the land which Cevons Waste Management Inc. was instructed to vacate by March 31, 2021, by the Attorney General (AG) and Minister of Legal Affairs, Anil Nandlall, on the grounds that it is property of the NSC.
As directed by the Government, the agreement was entered into Monday afternoon in the boardroom of the Ministry of Culture, Youth and Sport. Present were Minister of Culture, Youth and Sport, Charles S. Ramson; Chief Executive Officer of Cevons Waste Management Inc., Morse Archer; Permanent Secretary, Melissa Tucker; Director of Sports, Steve Ninvalle and Commissioners of the NSC, Dellon Davidson, Philip Fernandes, Cristy Campbell, Cheteram Ramdial and Kashif Muhammed.

Approximately two years after it paid most of $100M for a plot of land at Area C, Tract B Le Repentir, Georgetown (Mandela Avenue) Cevons Waste Management Inc. was instructed to vacate the premises on the basis that the land was previously sold unlawfully by the Guyana Lands and Surveys Commission (GLSC). “We were taken by surprise,” Archer told the Village Voice News back in February 2021.
Cevons had already been constructing a state-of-the-art building on the property for over a year and finally moved into the building for only about two weeks, after which the AG’s letter was received.
The lease granted to Cevons on December 18, 2018, was for a period of 50 years but on February 16, 2021, the Attorney General, said that it was of no effect and the land must be returned. He pointed out that GLSC had no legal authority to lease the said land to Cevons or anyone else as the power to sell State lands does not reside in the GLSC Commissioner but rather the President by virtue of Section 3 (1) of the State Lands Act, Chapter 62:01.

However, Archer told Village Voice News that there was nothing unlawful about the transaction he conducted with the GLSC. According to him, he followed all of the required legal procedures.
“We went through all of the application processes,” he said while noting that permission was granted at all three tiers – at the level of the Georgetown Mayor and City Council, the Central Housing and Planning Authority and the GLSC.

The Attorney General, in the letter, said he had taken note of the fact that Cevons had paid “a substantial sum of money” for the property, however, such a payment is not catered for in the State Lands Act and Regulations.

Though the Attorney General gave him an ultimatum, back in February Archer hoped that good sense would prevail. He pointed out that though fairly young, Cevons has been contributing to the development of Guyana, and has in its employ over 200 persons.

Subsequently, in May 2021 at a press conference, Vice President Bharrat Jagdeo said that legal proceedings to repossess lands sold to Cevons would no longer be pursued and the Government will go instead after “the people who acted illegally”. It was noted that the Government had settled on the matter with Cevons.

Tue Jul 20 , 2021
Support Village Voice News With a Donation of Your Choice. … items confiscated from stores in Regions 3 and 4 Inspectors of the Guyana National Bureau of Standards (GNBS) Product Compliance Department seized and destroyed 6,867 pieces of substandard electrical products on Monday which were deemed to be inferior and susceptible to causing losses or injury to consumers. The items […]