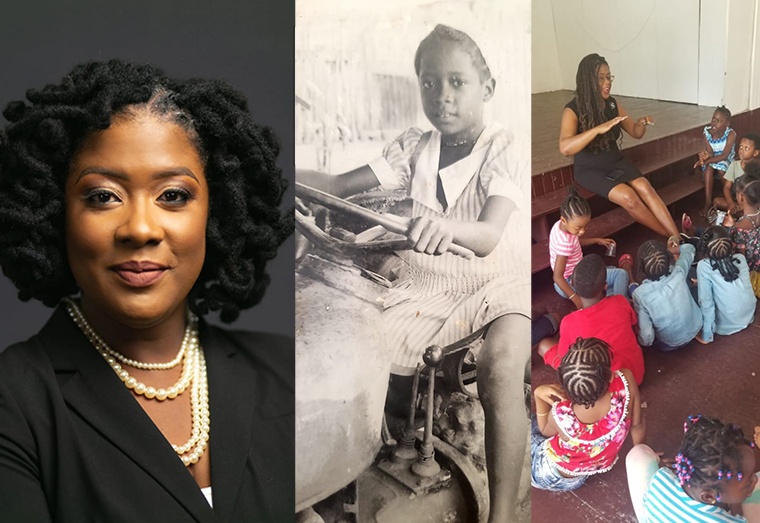 Just two years into politics, A Partnership for National Unity + Alliance For Change (APNU+AFC) Member of Parliament Amanza Walton-Desir is seen as a force to be reckoned with.

But who is Amanza Walton-Desir?

She is a Legal Counsel with more than 18 years of experience in the practice of international law, public policy and administration. First and foremost, though, she is a mother to two teenage sons. “I think my most important role is mommy,” Walton-Desir said, as she sat down for an interview with Village Voice News recently.

Family-oriented, a Guyanese to the bone, were among other adjectives she used to describe herself – a woman who hails from No. 50 Village, Corentyne, Berbice and the mining town of Linden, Region 10. Though her entire professional life was based in the Public Service, Walton-Desir always had an interest in politics. “I have always had, what I would say a passing interest because of course, who governs your country is very, very important in terms of its development,” she said.

It was in 2019 that Walton-Desir was approached by the People’s National Congress/Reform (PNC/R) – a major political block within the APNU+AFC Coalition – to be a candidate in the 2020 General and Regional Elections. At first Walton-Desir was identified as a Regional Candidate to sit on the Regional Democratic Council (RDC). Region 10, where she would have utilised her wealth of experience in the areas of aviation and maritime to help the region craft its developmental plan.

“When I was asked to serve at the regional level as a councilor…I said no problem because Linden is where I grew up; it is the birthplace of my father, and so it is very, very dear to me,” the mother of two recalled. But upon reviewing her Curriculum Vitae (CV), the leadership of the PNC/R asked Walton-Desir to consider serving at the national level. It was explained that if she agrees her name would be placed on the Coalition’s National Top Up List with the possibility of her being elected to sit in the National Assembly as a Member of Parliament.

Walton-Desir requested time to consider the request, and though her “love of country” led her to taking up the mantle, it was no easy decision to make, and involved the input of her sons, her mother Joy Walton, and other influential figures in her life.

“My mom, who passed last August, I think she was incredibly significant in ushering me into Parliament, because a lot of people don’t know that while I was on the campaign trail, and they would have seen me with her on the campaign trail, she was battling cancer. And so, she passed August 13, 2020 [and] between the time of her passing, and the time of the new government being installed, we were having this back and forth as to whether I wanted to go to Parliament. I was not sure,” Walton-Desir said, as she fought back the tears.

She said she was hesitant for many reasons, but her mother was confident that she would be able to better serve Guyana, should she take up a seat in the National Assembly.

“She said “no Amanza this is what you were born to do” and for weeks she kept asking, as best as she could, given how feeble she was at that time, and I would always remember, the day that I woke up and I decided that I was going to accept…I went to her room and I remember saying to her, Mommy I have decided; I will go, she squeezed my hand, and I left and went to the meeting with my principals to indicate my acceptance. When I returned home, as I pulled up into the driveway, she took her last breath, and so for me, it was almost an indication that she was waiting for me to make this decision,” Walton-Desir shared.

She added: “It was as if she saw the future and she knew that this was a decision that I needed to make for whatever reason and so she ensured that before she took off, that I had made that decision and that I had finalised it ….and so she passed that very day.”

The mother of two said though it has been no easy journey since August, 2020, she finds comfort and courage in the fact that in part, she is fulfilling her mother’s dream to serve the people of Guyana.  “I say to people very often that I am not at liberty to be half-hearted at this because for me, it’s deeper than position and power, it really, to me now, is about purpose,” the MP said.

In the political realm, Walton-Desir is known for frontally addressing the issue of race as well as foreign relations matters, given her portfolio as the Opposition’s Shadow Foreign Affairs Minister. In recent months, her frank discourse has led to her being described a “racist” by the governing People’s Progressive Party/Civic (PPP/C).

“For me, …. at all times, I check my motives, and I check my heart, and so once I consult with myself in that manner, and I am assured that my motives are pure and I am doing this with the best of intentions, I can withstand whatever storm,” she told this newspaper.

During one of her political discourses, Walton-Desir said the maintenance of true freedom requires that each citizen must be willing to assume the responsibility and the work that comes with being truly free. In that regard, she said there are mentally lazy people for whom the PPP/C capitalizes on. Walton-Desir said at no time did she label Indo-Guyanese mentally-lazy. In her response to the allegation at the time, the APNU+AFC MP said the PPP/C not only misrepresented her words, but it unwittingly demonstrated to the nation, in no uncertain terms, that race baiting and the promotion of ethnic insecurity remain the chief weapons in its arsenal to control their supporters.

During the interview with Village Voice News, the Attorney said she will not allow the PPP/C to dictate her life.

“I know who I am and the people of Guyana will get to know who I am on my terms. The PPP/C does not dictate who Amanza is, Amanza does that,” she made it clear, while positing that the PPP/C sees anyone who addresses racism head-on as a threat.

Further, she submitted that the attempt to besmirch her good character was intended to create “baggage” that does not exist. “When you come and you do not have baggage, what they will attempt to do is to create that baggage but I always say that I know who I am; I am fortified in the knowledge of who I am, and I am so blessed to come from a family that is mixed. I have Amerindians, I have East Indians, I have Chinese relatives, and so that is the environment I grew up in and so I bring that to the table, where we celebrate each other’s differences, where your difference is not viewed as a threat to me but something that makes us stronger, that makes us complementary,” she reasoned.

Walton-Desir said the attempts of the PPP/C to discredit her have failed and will continue to fail.

“My focus is on reaching Guyanese, who I believe share my passion for wanting to see an end to this race-based politics and an end to the racial insecurity that has plagued Guyana since our Independence, and I am betting on our young people that together, we will stem that tide,” she said.

A GUYANA FOR ALL

Asked what is her vision for Guyana, the APNU+AFC Member of Parliament said she hopes to see a Guyana that realises its full potential, where Guyanese live comfortably and don’t just merely survive. “My vision is a Guyana where the country grows as we grow, and it develops as we develop, a Guyana where we do not feel it necessary to leave to experience a wholesome, peaceful life. I think I want to see a Guyana where the waking reality of every Guyanese is a Guyana that is so well interconnected by road, by air, by sea, so that the hinterland is connected to the coast. That has to become the waking reality of every Guyanese, it could no longer be a dream,” she posited.

But for this dream to be realised, Guyanese must embrace each other’s differences and work collectively. “We have to put our shoulder to the wheel to be able to accomplish that now. We have to forge a Guyana where there is dynamic local governance that sees local authorities championing the growth of their constituents and the development of their communities. We have to see a Guyana where you don’t have to leave for quality health care, a Guyana where there is free education from nursery to university,” she said while underscoring the need to tackle the issue of racism. Walton-Desir said she is looking to the young people of the country to turn the tide and forge a Guyana that their children and grandchildren would be proud of.

Mon Jul 12 , 2021
Support Village Voice News With a Donation of Your Choice. …standards for several others deficient, water dirty   A number of water processors are operating illegally without the requisite license and approvals from the Government Analyst-Food and Drug Department (GA-FDD), which also said that many of them are selling dirty water to the public. In a press release the department said that […]