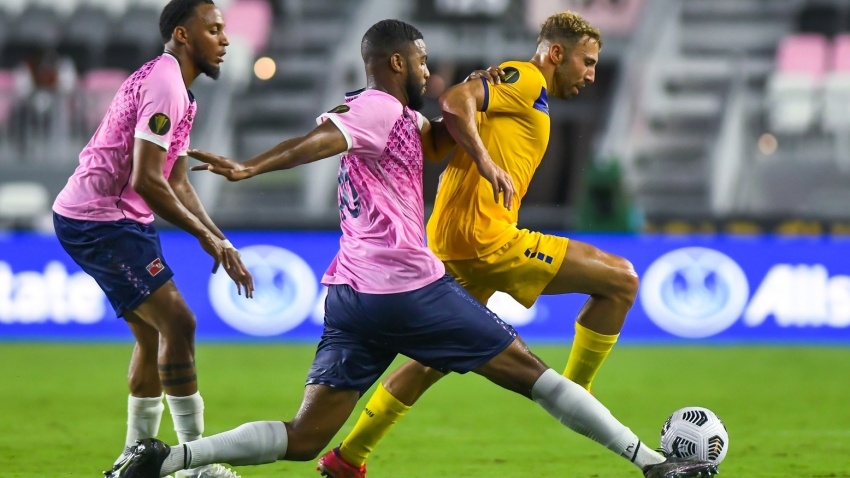 (SPORTS MAX) Bermuda rolled into the Second Round of the 2021 Concacaf Gold Cup Prelims thanks in part to a Nahki Wells hat trick in an 8-1 victory over Barbados on Friday night at DRV PNK Stadium in Fort Lauderdale, Florida.

The 8-1 scoreline also tied a Gold Cup record for most goals in a match (9).

It was a dream start for Bermuda, who raced out to a 1-0 lead just 17 seconds into the match when Wells turned a Zeiko Lewis cross into the net, a call that was confirmed by VAR.

The Wells goal also made some history, as it marked the fastest goal in Gold Cup history.

Bermuda were hungry for more and a hard hit from Lewis was cleverly back-heeled by Wells, leaving Barbados GK Liam Brathwaite flat-footed, to give Bermuda a 2-0 lead in the 14’.

The Bermuda attack was rolling and Reggie Lambe stretched the lead to 3-0 in the 29’ with an excellent left-footed finish.

Captain Dante Leverock was next to get into the act for Bermuda, as he smashed a header into net for a 4-0 lead.

Despite the deficit, Barbados kept plugging away and they were handsomely rewarded in the 45+1 minute when Hadan Holligan banked in a right-footed shot off the post to cut the gap to 4-1.

Bermuda halted any Barbados momentum and restored their four-goal advantage when a deep cross resulted in an own goal and a 5-1 lead in the 60th minute.

The Gombey Warriors were eager to add more and it became 6-1 in the 66’ with Kane Crichlow’s right-footed finish, followed a minute later in the 67th by Lewis making it 7-1 with a left-footed shot.

Wells then completed the 8-1 scoreline for Bermuda in the 87th when he converted from the penalty spot to nail down his hat-trick.

Sun Jul 4 , 2021
Support Village Voice News With a Donation of Your Choice. (BBC SPORT) England produced a magnificent display as they thrashed Ukraine in Rome to set up a Euro 2020 semi-final against Denmark at Wembley.  Manager Gareth Southgate’s side followed up the landmark victory over Germany in the last 16 by producing a performance of composure and the highest quality to […]