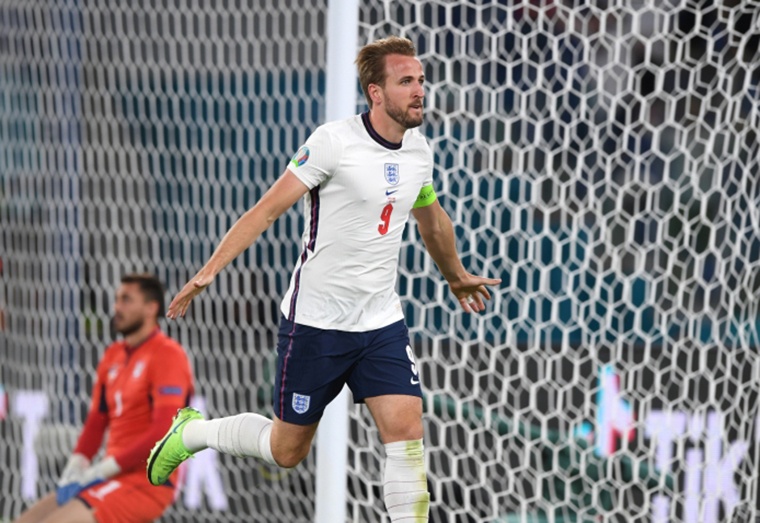 (BBC SPORT) England produced a magnificent display as they thrashed Ukraine in Rome to set up a Euro 2020 semi-final against Denmark at Wembley.

Manager Gareth Southgate’s side followed up the landmark victory over Germany in the last 16 by producing a performance of composure and the highest quality to continue their impressive progress in this tournament.

Harry Kane was back to his predatory best after struggling in the group stage, following up his goal against Germany by poking home a superb pass from Raheem Sterling after only four minutes.

Ukraine barely threatened and England – having reached the last four at the 2018 World Cup – were on their way to a second successive semi-final when Harry Maguire powered home a header from Luke Shaw’s free-kick seconds after the break.

And the outstanding Shaw was the creator once more four minutes later with a perfect cross that was headed in from six yards by Kane.

England were so impressive as they simply overpowered Ukraine with substitute Jordan Henderson getting the fourth – his first international goal, in his 62nd appearance – when he arrived with perfect timing to head in Mason Mount’s corner.

To add to England and Southgate’s satisfaction, they kept their fifth successive clean sheet to maintain their record of not conceding a goal at Euro 2020.

They will now meet Denmark in the last four at Wembley on Wednesday (20:00 BST kick-off). England manager Southgate never wavered for a second in his belief that captain Kane would have a significant impact on Euro 2020, even when he looked off the pace and out of sorts when failing to score in group games against Croatia, Scotland and the Czech Republic.

Southgate’s faith was rewarded when Kane got off the mark with England’s crucial second in the 2-0 win over Germany. It was the catalyst for the real Kane to come alive in the tournament – and he punished Ukraine in trademark style.

Kane pounced for his first, rose to power in a second for his 47th England goal and almost completed a hat-trick in spectacular fashion with a left-foot volley that was turned on to the post by Ukraine keeper Georgi Bushchan. He was a constant threat, his link with Sterling increasingly impressive, and has timed his return to peak form perfectly as England now stand only 90 minutes away from their first major final since they won the World Cup in 1966. Kane is the man defences fear – and even the in-form Danes will regard this display as ominous.

Manchester United’s Shaw has had to fight to revive his England career – having been behind Chelsea’s Ben Chilwell for some time, he missed out on a start against Croatia in the Euro 2020 opener, when Southgate used Kieran Trippier in the left-back role.

It has all changed since he was brought into the side for the goalless draw against Scotland. Shaw has made a magnificent contribution to England’s run to the semi-final and will be one of the first names on the teamsheet for the game against Denmark.

Shaw has been solid in defence while proving to be a potent creator of goals, setting up Sterling’s vital opening goal against Germany then setting up two more here, first with pitch-perfect delivery from a free-kick and then a perfect cross.

It has not been a smooth ride for Shaw, who emerged as a teenager at Southampton before his big-money move to Manchester United in June 2014.

He has suffered serious injury at United, and was never trusted by Jose Mourinho when he was their manager, but is now delivering for England in a major tournament – proof of his character, and an achievement that makes that long road even more worthwhile.

Southgate has manoeuvred his England squad with great expertise throughout Euro 2020, demonstrating the riches he has at his disposal. In Rome, he was able to give a first start in the tournament to Jadon Sancho, the 21-year-old who has just agreed a £73m move to Manchester United from Borussia Dortmund.

Sancho slotted in perfectly, showing huge confidence and ambition in a timely reminder of what he can offer. Chelsea’s Mount also returned the England side, with two creators in the shape of Aston Villa captain Jack Grealish and Manchester City’s Phil Foden left on the bench. Henderson, the vastly experienced Liverpool captain, made his mark while Marcus Rashford was also introduced off the bench. It was proof, amid an imperious victory, that Southgate’s England squad has the sort of quality and depth that will make them confident they can finally end that 55-year wait for success.

Sun Jul 4 , 2021
Support Village Voice News With a Donation of Your Choice. (SPORTS MAX) Haiti kicked off the 2021 Concacaf Gold Cup Prelims with a commanding 6-1 victory over Saint Vincent and the Grenadines on Friday at DRV PNK Stadium in Fort Lauderdale, Florida. Haiti were in control from the start and nearly broke the deadlock in the 21st minute, but Saint Vincent […]