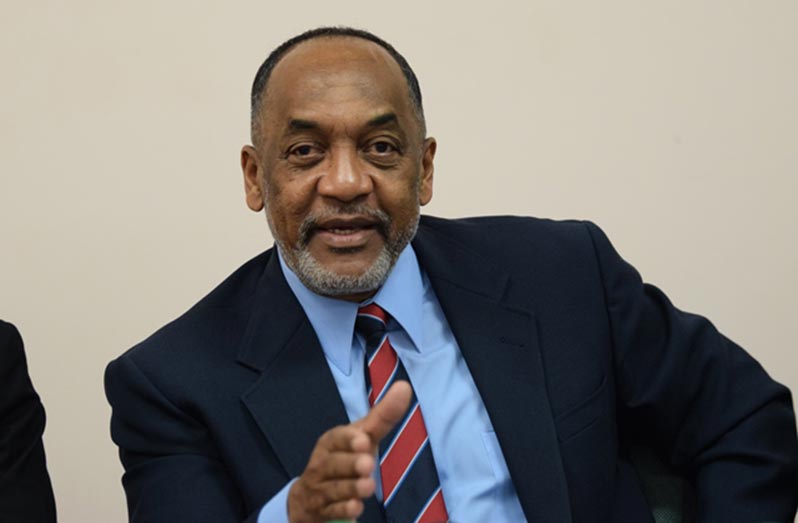 The Environmental Protection Agency (EPA) modification to the Liza 1 Environmental Permit allowing an astronomical 60 days of flaring at start-up, is nothing but a licence to pollute, and a callous aggravation of the already inhumane illegal flaring by EEPGL, former head of that agency Dr Vincent Adams said.

Adams made the comments last week during a news conference hosted by the Alliance For Change. “No doubt encouraged by an inexplicable wink and nod by the Guyana Government. It is also nothing but a godsend to EEPGL to cover-up its demonstrated incompetence throughout the 18 months of operation, by its failure to execute a basic task of controlling and fixing the flaring problems per standard operating practices,” Adams said. He said this EEPGL inexcusable failure begs the question why is this only occurring in Guyana on Exxon’s supposed most modern FPSO when Exxon has numerous of these ships operating worldwide?

Dr Adams said the flaws in this Modification are astonishing, and do not appear to be just a coincidence that they are all extremely favourable to EEPGL, with nothing favourable to the people of Guyana.

“First, it must be noted that the USA allows a mere 48 hrs of flaring at start-up – 30 times less than the 60 days that Guyana now allows in this modification, despite the fact that EEPGL had given all assurances that flaring will be done on “day one”, and despite the otherwise strong position held by its own Government experts.” Adams reminded that during the review leading up to approvals of the Payara Field Development Plan and EPA Permit, the Government team of EPA, DOE (Department of Energy), GGMC (Guyana Geology and Mines Commission) and the Canadian Consultants, in unanimity, directed that EEPGL adopts the USA standard of 48 hours; but curiously, this directive was obviously turned upside down in the final approvals by the Government.

“This horrible modification that flies in the face of the Government’s own expert representatives, is only the first salvo, as soon to come, will be the same for the Liza 2, Payara, and all future Permits. So, this undoubtedly bodes very badly for the people of Guyana and the Caribbean; since, based upon the bad experience of the Liza 1 failings, simple calculations show that such freedom to flare could result in billions of cubic feet (bcf) of gas being flared in just those first 60 days for all future projects, when considering that both the Liza 2 and Payara developments will each be almost doubling the current production rate of Liza 1,” Adams contended.

Additionally, Adams said frighteningly, there is no condition in the Modification to stop the flaring after 60 days; ostensibly meaning that the flaring could continue unabated forever, as long as the menial fine of $30 per tonne of carbon dioxide equivalent (CO2 eq) is being paid. “Interestingly too, the Government has not revealed the basis for its $30 per tonne number; however, reports have exposed that the internationally accepted numbers are more in the range of $60 to $100 per tonne. Regardless though, the only problem, whether by sheer carelessness or ineptitude, is that the Payara Permit negates any such penalties for flaring, no matter the time period and amount,” Adams said.

He noted that according to Clause 3.4 of the Payara Permit which is now the template for all such current and future Permits, “Flaring is only permissible under “Commissioning, Start-up, or Special Circumstances.” Stunningly however, “Special Circumstances” is defined as “Planned/unplanned maintenance and inspection on gas handling equipment and related processes”.

Hence, since all of the flaring could only be caused by the gas handling equipment which includes the compressor equipment causing the current flaring, and since by this Clause, flaring is allowed whenever the gas handling equipment is under maintenance; then, it could only be concluded that the insertion of this Clause is nothing but a farce and a slick gimmick to legalize all flaring occurring before and after 60 days, at the expense of our people’s health and environment.

Further, Adams said the people of Guyana must feel let down by the Government’s public claim, evidently through lack of knowledge, that paying for flaring is following the “polluter pays principle”. According to this unheard-of interpretation, the polluter is allowed to pollute as much as they want and for as long as they want, as long as they pay the paltry $30 per tonne of CO2 eq for it – a most bizarre interpretation, since all environmental principles are designed to curb pollution and not to incentivize it. Such a low fee would certainly be an incentive for unlimited flaring if it costs the company less to pay the fines when compared to purchasing, running and maintaining the gas handling equipment causing the flaring.

“It is also evident why, because of this strange interpretation, the Modification has no stated condition for terminating flaring after the 60 days, as long as EEPGL pays for the flaring, notwithstanding the other conundrum presented in Clause 3.4 of the Payara Permit unquestionably appearing to exempt all flaring from fines and penalties, regardless of time period and amounts,” he said.

Nonetheless, Adams said for the Government’s enlightenment, the “Polluter Pays Principle” was created with the simple intent to make the polluter pay for cleanup of damage to the environment after an incident or operation such as an oil spill. It would be contradictory and even counter intuitive to the definition and spirit of environmental protection to think that it could have meant freedom to pollute as much as you can and for long as you can, as long as you pay for it.

He said it is rather extraordinary that the EPA press release announcing the Modification, would include “the Government’s persistent mistruth that there exists in the EIA, an estimated flaring allowance of 14 bcf of gas, even though EEPGL itself, has publicly ‘thrown the Government under the bus by distancing itself from this untruthfulness.”

“The weird inclusion of this publicly validated mistruth coming from a Government Agency that people are supposed to trust, could only be construed as a bare-faced slick move to codify its dumbfounding legalization of the 14 bcf (billion cubic feet) of gas illegally flared to date, so as to inoculate this amount from the $30 per tonne penalty which could amount to an estimated total penalty of approximately $30 million USD.

If the Government cares to be taken seriously by the people of Guyana and by the people watching this situation from around the world, then it must not continue to defend this egregious flaring against its own laws for which it took an oath to protect. Instead, it must start with levying the $30 per tonne fine, as measly as it may be, against the existing illegally flared 14 billion cubic feet -bcf of gas, rather than protect the interest of Exxon at the expense of its own people,” Dr Adams said.

Adams said to show some semblance of interest in the nation’s environment and our people’s health and safety, rather than to the interest of ExxonMobil, the Government is called upon to withdraw this dastardly Permit Modification and replace it with the original positions held by the Government’s expert team of the EPA, GGMC, DOE and the Canadian Consultants. Additionally, he said the Government must urgently convene an independent team of experts to conduct an in-depth investigation of the flaring issue, since it is apparent that EEPGL is incapable of a resolution.

It was Exxon that announced last week that the upgraded and repaired discharge silencer of the third stage flash gas compressor and a new venturi were safely installed on the Liza Destiny and the first phase of testing was successfully completed earlier in the week.

The flash gas compression system was started up June 19 for the first testing phase and was shut down on June 28th in order to remove temporary probes and instrumentation. During the first testing phase we were able to reduce the flare to pilot level. Initial test results indicate improvements in pulsation dampening performance. The second phase of testing will begin on July 4.  Upon successful completion, we expect the system to continue into normal operation.

However, the company said to ensure it remains in compliance with its environmental permit, “we have applied to the Environmental Protection Agency (EPA) for approval to flare above pilot level for this extended period of equipment testing. As previously communicated, a new redesigned flash gas compressor is being manufactured and is expected to arrive in the country during the fourth quarter of this year.”

Den Amstel residents and NDC at odds over use of lands

Sun Jul 4 , 2021
Support Village Voice News With a Donation of Your Choice. …villagers want lands for residential use, NDC wants it to graze cows By Svetlana With a drastic decline in cattle rearing, some residents of Den Amstel – a village located on the West Coast of Demerara – believe the time has come for them to transform a section of their agricultural lands into […]