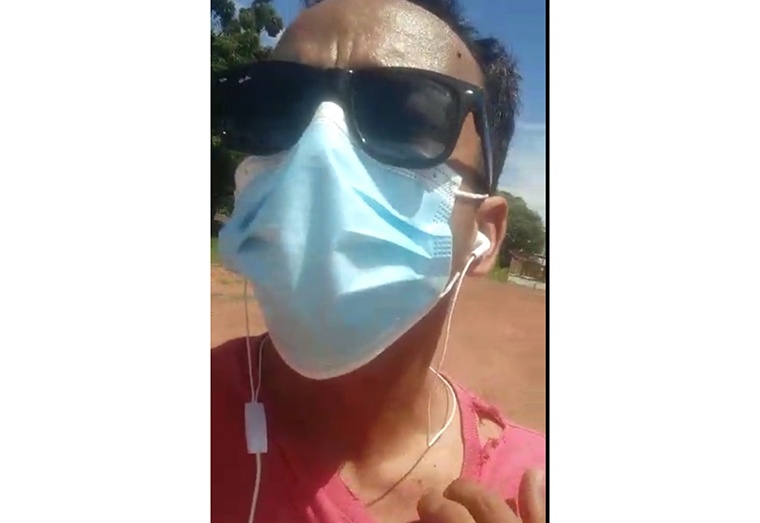 A Lethem man, who says the police arrested and assaulted him in his yard for not wearing a face mask on Sunday night is calling on the hierarchy of the Guyana Police Force to investigate the conduct of its ranks stationed at the border town.

The man, Jonathon Cheesewright, who provided a video of his arrest, told the Village Voice News that on Sunday night around 21:00hrs, he was sitting in his hard yard at Tabatinga, Lethem when he saw a truckload of police ranks approaching his home.

The man, a taxi driver said he was looking at the truck approaching his home with a number of persons who he assumed were arrested by the police. When the truck neared his home, two of the ranks jumped from the vehicle and grabbed him by his neck after accusing him for not wearing a mask. “I was here, in my yard and was curious about the noise and I stand up to see what the noise was about,” he said.

He said the men tore his top and pulled him out of his yard. He said the ranks left visible lacerations to his neck and chest while they arrested him. He was then placed in the truck with persons who were arrested and he noted that he was resisting this since he believed it was unfair. “I was in my yard sitting here , not on the road, “ he said as he pointed to the spot under his home where he was standing.

The man said the police ranks told him at the Lethem Police Station that he would be charged for not wearing a face mask and for disorderly conduct. He is expected to make a court appearance next week. The man noted that the police ranks were very unprofessional in their conduct and according to him, the authorities should consider who it is employing to be police officers. In recent weeks, a number of videos have surfaced on social media in which police ranks can be seen effecting arrests while physically assaulting those being arrested. A police rank attached to the Wales Police Station was placed under close arrest this week for such actions, after he was seen dragging a handcuffed man into the lock-ups.

Fri Jul 2 , 2021
Support Village Voice News With a Donation of Your Choice. …police accusing them of perverting the course of justice Six women who placed murder accused Gladston Henry Jnr at his Number 3, West Coast Berbice home at the time 17-year-old Haresh Singh was killed in the Backdam have been arrested by police who are accusing them of allegedly attempting to […]