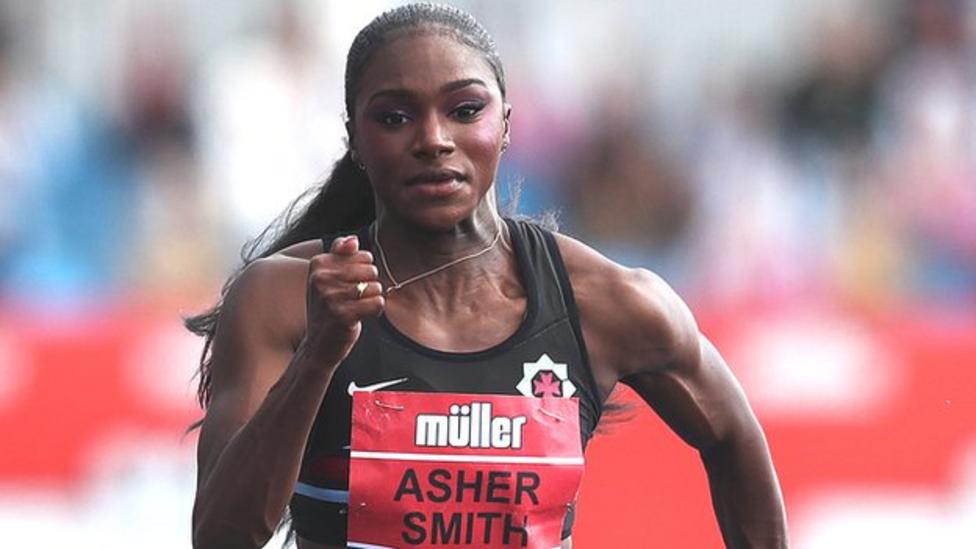 BBC Sport – Dina Asher-Smith booked her 100m spot at the Tokyo Olympics but was denied a new British record when her run, initially timed at 10.71 seconds, was revised to 10.97.

The British Championships crowd in Manchester, who thought they had seen a historic performance, groaned as Asher-Smith’s time was corrected.

The performance trumps Bradshaw’s 4.87m vault from January 2012 and takes her to third in the global 2021 standings.

CJ Ujah won the men’s 100m in commanding style, cantering to victory in 10.05 seconds to confirm his place on the Olympic team after Zharnel Hughes, quickest in the semi-finals, was disqualified for a false start.

Hughes ran 10.06 seconds in the semi-final, checking over both his shoulders as he eased in just one hundredth of a second outside the Olympic qualifying standard he lacks.

There is a chance that performance may yet be good enough to take him to Tokyo, but he is at the whim of the selectors and performances elsewhere in the world.

Reece Prescod, the fourth-fastest Briton of all time, is still finding his way back to form after tearing his hamstring in 2019, and finished fifth in 10.33 seconds.

ASHER-SMITH BEATEN BY THE CLOCK

“There are a few things I did wrong so when I crossed the line I was a bit like, ‘wow, OK’,” said Asher-Smith.”Maybe I can go so much faster because that wasn’t the perfect race, so I’m not entirely surprised to see the clock was not 10.71 but a win is a win at the Olympic trials.”

Victory secured Asher-Smith’s fourth national 100m title, but the domestic competition has long since ceased to be the 25-year-old’s real rivals.

On Friday, Shericka Jackson, stepping down from her usual 400m, qualified for the Jamaican team, running 10.77 seconds en route.

American champion Sha-Carri Richardson has dipped under 10.80 seconds on three occasions already in 2021.

Asher-Smith beat Richardson in the Gateshead rain earlier this season and on a sunny, still evening, she had an ideal chance to prove herself on the clock as well as on the track.

After powering home in 10.91 in her semi-final without really pressing, she pushed to the line in the final, well clear of the field.

The initial clocking of 10.71 seconds – which would have smashed her national record of 10.83 seconds and put her sixth on the world all-time list – seemed entirely plausible.

But it wasn’t to last and the change of more than a quarter of a second was met with confusion and disappointment by fans.

“I’m in great shape, I know we all run in different continents and different conditions but when you all meet that’s what really matters,” said Asher-Smith of her international competition.” I have faster in me. I’m in good shape. I’m a championship performer.”

Jake Wightman and Josh Kerr, who finished fifth and sixth respectively in the world final in Doha in 2019, fought out a tremendous finish in the 1500m with Kerr taking victory by five hundredths of a second in 3:40.72. Both will represent Britain in Tokyo.

Lawrence Okoye, who reached the final of London 2012 as a 20-year-old and then spent seven years playing American football career in the United States, completed a remarkable return to the Olympics after backing a pair of Tokyo-qualifying throws earlier this month with the British title.

“All I care about is how I perform,” Okoye said. “Getting to Tokyo doesn’t mean much to me, it’s about what I do when I get there.”

Andrew Pozzi’s Olympic qualification is yet to be confirmed after he clattered the eighth flight of hurdles when leading the 110m hurdles final to finish third behind Tade Ojora in 13.38 seconds.

Jessica Turner took a competitive 400m hurdles final in 54.83 ahead of Meghan Beesley, leaving defending champion and Britain’s fastest women in 2021 Jessie Knight hoping the selectors add a third athlete to the event.

Jodie Williams and Nicole Yeargin are Tokyo-bound after taking the first two spots in the 400m, with Williams taking victory in 51.02, a hundredth of a second outside her lifetime best.

Scot Yeargin, 23, was born and brought up in the United States and kicked for her high school’s boys’ American Football team before taking up athletics five years ago.

Katie Snowden, the only woman in the 1500m final with the Olympic qualifying standard, was surprised by Revee Walcott-Nolan and Erin Wallace, leaving her third and waiting on the selectors’ decision.

Tom Gale won the high jump and secured a spot in the Olympic team with a clearance of 2.24m.

Andrew Butchart claimed his Tokyo ticket with second place in the 5,000m behind winner Patrick Dever, who lacks an Olympic qualifying standard.

Scott Lincoln earned his Tokyo spot in the shot put while US-based 26-year-old Elizabeth Bird did the same with victory in the 3,000m steeplechase.

‘THE TIMETABLE WORKS’ – MUIR TO DOUBLE UP IN TOKYO

In the women’s event, Jemma Reekie, the fastest Briton this year, ran 2:01.46 to win her heat. Laura Muir, Reekie’s training partner and lockdown housemate, took the second in a more leisurely 2:05.41.

Muir, who has finished in the top five in the last three world 1500m finals, has opted to push her claims in the more competitive 800m as she attempts to earn selection for both events.

“I think I can make that Olympic final in the 800m and once there, anything can happen,” she said.”So rather than put all the eggs in one basket, I’d rather spread them out a bit. The timetable works in Tokyo. I know I’m strong. I know I can double. I know I’m good in both events. So I might as well do it.”

The women’s heptathlon events started on Saturday, but without world champion Katarina Johnson-Thompson.

The 28-year-old pulled out of the event with an Achilles tendon problem which has kept her out of competition all year and disrupted her Olympic preparation.

The full British team for Tokyo will be announced at 11:00 BST on Tuesday.

Sun Jun 27 , 2021
Support Village Voice News With a Donation of Your Choice. Sports Max – Evin Lewis smashed 71 off 35 balls as West Indies cruised to an eight-wicket win over South Africa in the first Twenty20 international in Grenada on Saturday. Rassie van der Dussen (56 not out) and wicketkeeper Quinton de Kock (37) helped the Proteas post a modest 160-6 as […]