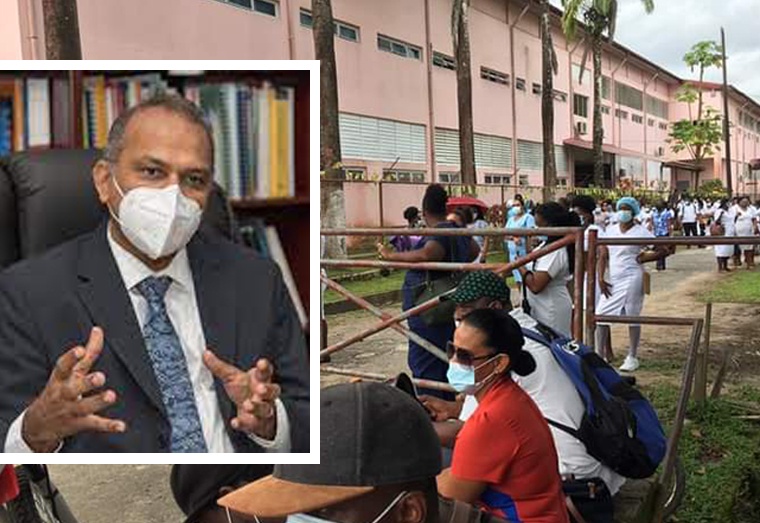 Warning that the two-week extension given to nurses and other medical personnel to get vaccinated would result in little change given their concerns, President of the Guyana Nurses Association (GNA), Cleopatra Barkoye said had Government consulted the Association and the Office of the Chief Nurse, it would have been able to employ a better approach as against “forced vaccination.”

In an exclusive interview with the Village Voice Newspaper, Barkoye said successive governments have failed to consult with the Nurses Association and even the Office of the Chief Nurse, when arriving at decisions that impact nurses, midwives and other medical personnel.

She said following the change in Administration in August 2020, the Executives of the Nurses Association sat down with the Minister of Health, Dr. Frank Anthony with the hope the Chief Nursing Officer would be actively consulted during the COVID-19 pandemic on matters that touch and concern nurses but the situation has only deteriorated.

“And so we are not only shut out at the level of the Nursing Association but nursing in general is shut out. [But] we have the knowledge, we are there with the patients 24/7 and so nurses have knowledge that can benefit our administration, and in turn benefit our patients,” the GNA President said.

Barkoye said while the Guyana Nurses Association supports vaccination it is not in support of “forced” vaccination.

“The Guyana Nurses Association is not against vaccines. We will never be against vaccines because we are nurses, and we know the benefit of vaccines, however, what the association is against is the forced mandate. Everyone has a choice, not a choice between whether to take a vaccine or a PCR…,” the GNA President said as she set the record straight.

Under the new COVID-19 Emergency Measures, which took effect on August 1, unvaccinated medical personnel including nurses and doctors are given two options – be vaccinated against Coronavirus Disease (COVID-19) or produce a weekly negative COVID-19 PCR result. “These results would only be accepted from authorized private labs where the cost is to be borne by the staff,” Permanent Secretary of the Ministry of Health, Malcolm Watkins, had outlined in a memo to staff.

But by the night of August 11, the Health Minister relaxed the measures for public health workers and public transportation operators after residents blocked the Mackenzie/Wismar Bridge to protest Government’s Vaccination Policy, which saw many unvaccinated nurses, doctors and even patients and relatives of patients being shut out of the Linden Hospital Complex.

In making the announcement, Minister Anthony said the two-week extension was as a result of representation made by various stakeholders. “I have examined the request and wish to announce that healthcare workers, public transport operators and conductors will be given two weeks to comply with the Order,” the Health Minister said, while noting that the Government has secured enough vaccines for the adult population. “Guyanese have a choice of first and second dose AstraZeneca or SinoPharm and first dose Sputnik V. Additionally, the Pfizer vaccine for our children will soon be available,” he added.

But the GNA President is not convinced that the position of the concerned unvaccinated nurses would change significantly at the end of the two-week extension. “… What’s next? What is the next step? We will still be in the same position as we are today,” she posited.

Barkoye said it is time for the Government to change its approach, and involve the Nurses Association and the Office of the Chief Nurse when arriving at future decisions.

“The Nursing Association is saying let’s sit and talk…. We want our Chief Nurse, we want her Office involved…We need the Nurses Association involved because we know, we can talk to our own. We know, we will tell you the approach to take,” Barkoye said while iterating that the two-week ultimatum will simply not work.

She explained that some medical personnel are still researching the vaccines for themselves, while others have health concerns and some religious conviction.

“Persons may want to say but why the hesitancy, why nurses aren’t taking the vaccine but some nurses, and many people across this country may never ever be able to take that vaccine, and one of the things, the researchers are saying persons who have allergic reactions and I know of at least one and I know they are far many more than that, nurses, who cannot take the vaccine, because of that. The other thing is illnesses,” she reasoned.

Barkoye warned that should Government fail to change its approach, patients will suffer. “We will be back at square one, and you know who will suffer, the persons who have been suffering all along, and that is the populace. They will continue to suffer, and they shouldn’t. We want to do work. We are trained to do this, and we want to do it; we want to be at the patient bedside and give the care that they deserved, we want a healthy nation, that is what we are here for,” she said.

However, she is urging nurses, who are yet to decide whether they will take vaccine, to rely on research.

“What I would say to the nurses, is that you need to use wisdom, look at what the research says, because as nurses that is how we practice, we practice by research. Look at what the research is saying, believe the information that is important for your health, for your family’s health, and for the health of the nation, use wisdom in all of this, and above all be united nurses. You need to be united in whatever decision we take,” the GNA President said.

The GNA President said it is regrettable that numerous letters written to the Ministry of Health concerning a plethora of issues have been left unanswered, however, she said there is still time for the Government to include the GNA and Office of the Chief Nurse in its decision making process.

‘When in trouble, PPP digs up Rodney’

Mon Aug 16 , 2021
Support Village Voice News With a Donation of Your Choice. …Opposition MPs question govt’s motive for motion honouring life of late historian By Svetlana Marshall The National Assembly in the wee hours of last Tuesday morning passed a motion for the adoption and implementation of the recommendations contained in the Commission of Inquiry (COI) Report on the death of Dr. […]