…Harmon calls on Gov’t to be transparent, cautious about its procurement methods

Minister of Health, Dr. Frank Anthony has expressed his disappointment in the statements of Opposition Leader, Joseph Harmon regarding the Sputnik-V vaccines in Guyana which have been under heightened scrutiny recently.

In response to a letter from Harmon on June 18, 2021 requesting additional information about the vaccines, Dr. Anthony stated that Harmon’s calls for a halt in the administration of the Sputnik-V vaccines in the country has negatively impacted the ongoing vaccination campaign and therefore the lives of Guyanese.

“I must express my Ministry’s and our Government’s disappointment in your statements which were done without any evidence, deeming the Sputnik-V vaccines used in Guyana as ‘fake’. In doing so, you intentionally encourage citizens not to take the vaccine and therefore put their lives at risk. You publicly demanded the suspension of vaccination with Sputnik-V and, therefore, further putting people’s lives in jeopardy. I urge you to present the evidence that the vaccines are ‘fake’, and if you cannot then you should withdraw your statement and publicly apologize to the Guyanese people,” the Health Minister wrote.

On June 18, the Leader of the Opposition wrote Dr. Anthony seeking full disclosure on the acquisition of Sputnik-V vaccine from Sheik Ahmed Dalmook Al Maktoum.

In the National Assembly last Monday, the Health Minister, while being grilled for approximately two hours, disclosed that the Sputnik-V vaccines procured for Guyana for use in its fight against the COVID 19 pandemic, were not procured directly from the Government of Russia, but through a middleman whom he identified as the Sheik Ahmed Dalmook Al Maktoum.

As such, the Opposition Leader said he is seeking critical information on the quantities and batch numbers of the vaccines purchased from Sheik Al Maktoum and/or Umar Zahoor and their partners; shipping information including transhipment information and the conditions under which vaccines were stored for shipment; and details on the procurement process utilised including the due diligence done on the supplier.

Before then, Harmon called on the Government to put a hold on the administration of the recently procured 200,000 doses of Russian-made Sputnik-V vaccines until they can be verified as trustworthy. The Opposition Leader did not dub the Sputnik-V vaccine “fake” as suggested by the Health Minister, however, he did express concern over its efficacy and referenced a case in Mexico where fake Sputnik-V vaccines were found.

In response to Harmon’s questions, the Health Minister referred him to his responses given in the National Assembly. Dr. Anthony said that he also answered questions in relation to the quantity procured, the arrival of the vaccines, the shipment arrangements and the temperature monitoring involved.

However, he nonetheless underscored that Guyana has not imported any vaccine without the requisite registration and approval for emergency use by Guyana’s regulatory agency, the Government Analyst Food and Drug Department (GA-FDD). Dr. Anthony also stated that the vaccines imported to Guyana met the GA-FDD’s requirements.

He said: “All due diligence was conducted prior to procurement of all vaccines. Rigid and continuous monitoring of vaccines storage temperature are in place from manufacturing factory, throughout transportation to Guyana, during storage in our bonds and at utilization sites. We urge you to be more responsible and to join us in our pursuit for full vaccination of the adult population in Guyana as early as possible, in order to curb this relentless pandemic. It is in the interest and welfare of all our citizens.”

Sun Jun 20 , 2021
Support Village Voice News With a Donation of Your Choice. The Guyana Badminton Association introduced the Shuttle Time Project to the New Amsterdam Multilateral School and the Berbice High School last weekend (Friday and Saturday), to continue the development of Badminton around the Country. This projects organised by the GBA is being conducted by Guyana’s top National & International Badminton […] 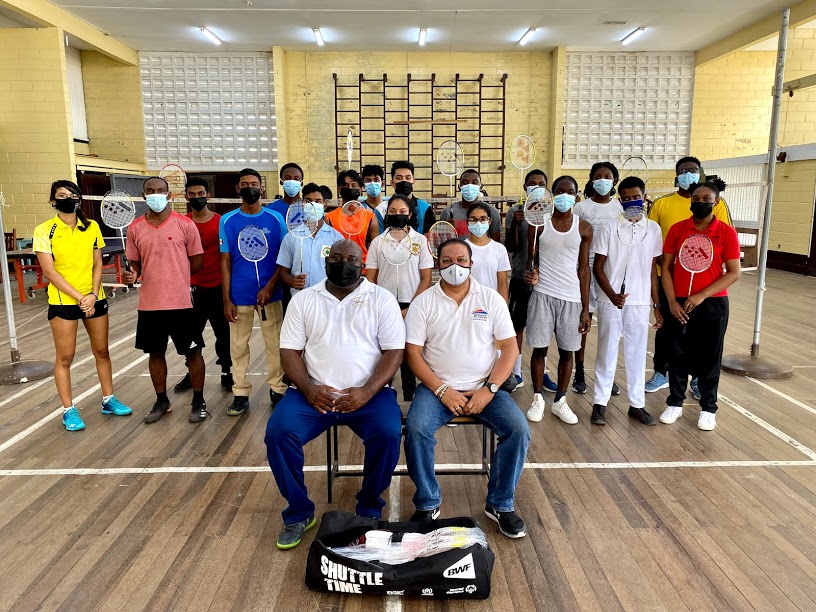