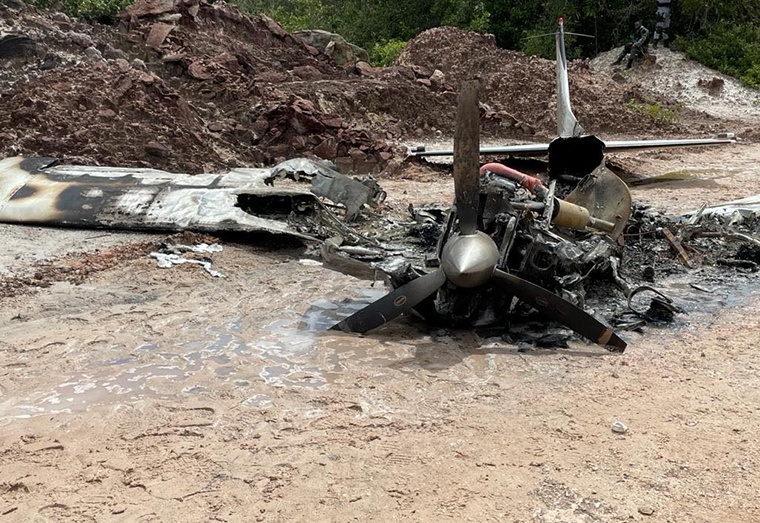 ….another was circling but landed in Suriname with 400 kilos of cocaine

A burnt aircraft was discovered in the Bissaruni trail some 12 miles east of Kwakwani, Minister of Home Affairs, Robeson Benn disclosed on Tuesday.

According to the Home Affairs Minister, the aircraft was first seen circling the Bissaruni trail on Monday, June 14, 2021 at around 20:15hrs.

The aircraft subsequently landed and was discovered completely burnt.
“Examinations identified a burnt-out Cessna 206 in the Bissaruni trail with no illicit drugs or burnt bodies. This suggests that it was a deliberate landing and burning of evidence, and the occupants may still be in the area,” the Home Affairs Minister said.

He noted that ranks from CANU and the Joint Services have since located the aircraft, and are examining it for further information. A search is underway to find its occupants.

It was disclosed too that the Guyana Police Force has since deployed roadblock to intercept persons of interest.

“Should anyone have information regarding the event, they must contact the nearest police station,” Minister Benn urged.

Meanwhile, another aircraft was seen flying over Southern Guyana on Monday. “Attempts were made by CANU and the GPF to intercept, but the aircraft managed to land in Kaaimangrasie, Suriname,” Minister Benn disclosed.

He said Surinamese officials were alerted and managed to arrive on site, and subsequently seized more than 400 kilos of cocaine.
In a separate statement, CANU said it is working along with the Joint Services to locate the pilot of the aircraft found near Kwakwani and to determine the circumstances of the discovery.

However, as indicated by the Home Affairs Minister, CANU said though no illicit cargo was discovered, it is suspected that aircraft was involved in illegal activities.

“Recently there have been several seizures of cocaine between Guyana and Suriname as a result of closer collaboration and cooperation,” CANU said.

Last month, the Guyanese authorities intercepted an aircraft carrying 450 kilos of cocaine near the Indigenous village of Orealla. The two occupants of the aircraft claimed to be on their way to Suriname to deliver a shipment of magnesium. However, the cargo turned out to be drugs.

Wed Jun 16 , 2021
Support Village Voice News With a Donation of Your Choice. …Leader of the opposition calls for full disclosure Opposition Leader, Joseph Harmon said Norwegian newspaper Verdens Gang (VG), in a recent global investigative report, has linked Guyana to a COVID-19 vaccine racket in which intermediaries from the United Arab Emirates (UAE) are obtaining the Sputnik vaccine and are re-selling it […]