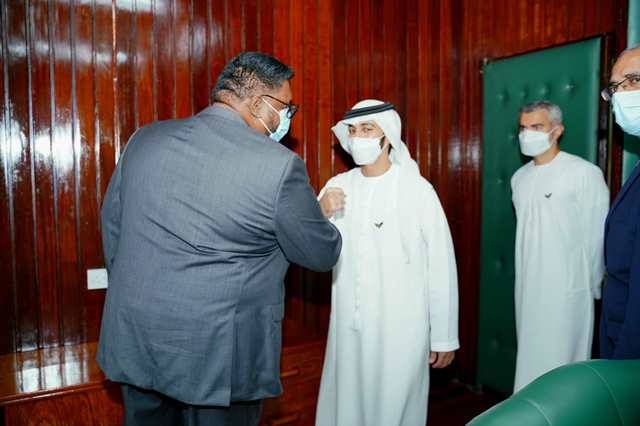 …Leader of the opposition calls for full disclosure

Opposition Leader, Joseph Harmon said Norwegian newspaper Verdens Gang (VG), in a recent global investigative report, has linked Guyana to a COVID-19 vaccine racket in which intermediaries from the United Arab Emirates (UAE) are obtaining the Sputnik vaccine and are re-selling it at a premium.

In the National Assembly on Monday, Minister of Health, Dr. Frank Anthony, while being grilled by the Opposition, disclosed that the People’s Progressive Party/Civic (PPP/C) Administration had procured 200,000 doses of Sputnik V COVID-19 vaccines at a cost of $957,000,000 from Sheik Ahmed Dalmook Al Maktoum of the United Arab Emirates. “This sum was not budgeted for neither did it receive the prior approval of the National Assembly,” Harmon said.

The Opposition Leader recalled that it was November last that Sheik Al Maktoum, accompanied by Umar Farooq Zahoor, visited Guyana on a private jet as a guest of the state and hosted by President Irfaan Ali.

He said according to the Norwegian newspaper, Zahoor is a Pakistani national who grew up in Norway, and is wanted as part of an investigation into a massive fraud. However, he is reportedly being protected by the United Arab Emirates and his close associate Sheik Al Maktoum.

“Even more disturbingly, the Verdens Gang report reveals that Sheik Al Maktoum has procured the Sputnik V vaccines via a Norwegian man by the name of Per Morten Hansen who is indicted in Norway for money laundering and evading customs duties,” Harmon said.

When asked whether the Sputnik V vaccines bought by Guyana were procured via Per Morten Hansen, Dr. Anthony was unable to indicate.

However, the investigation by the Verdens Gang newspaper, Harmon said reveals, and provides supporting evidence, that Sheik Al Maktoum and Hansen are associates and work in tandem.

The Verdens Gang investigative report states: “VG has documented how intermediaries have obtained the Sputnik vaccine and are re-selling it at a premium.

Through investigations in countries including Ghana, Russia, Pakistan, Guyana and Iraq, VG has been able to document how the Russian vaccines have travelled via a sheik in the Emirates and round the world. Among those involved are at least one individual with a long and troubled past with the law in Norway.”

The Verdens Gang report identifies this ‘one individual’, the middleman who supplies Sputnik V vaccines from the Russians to Sheik Al Maktoum as Per Morten Hansen.

When questioned by the Opposition Leader about the procurement method for the purchase of the vaccines, Minister Anthony disclosed that it was done via “direct sourcing”.

“Minister Anthony sheepishly claimed that the PPP government approached the Russian Sovereign Fund and was advised that it could not provide vaccines but directed them to Al Maktoum,” Harmon said while adding that “it is evident that the PPP did not exercise due diligence in its attempt to purchase vaccines and their executive recklessness now exposes a number of issues.”

The Opposition Leader said it is clear that the PPP/C Government knowingly participate in an international vaccine racket; knowingly engaged in price-gouging transaction – which it had to have known was exploitative, overpaying over $600M for the Sputnik V vaccines; and was eager to engage with Sheik Al Maktoum “to close deals and hand over billions of dollars of Guyanese taxpayers monies.”

According to Harmon, the “PPP is guilty of being involved in a corrupt transaction that was deliberately sewn together to defraud the state and benefit a few people.”

He added: “This level of industrial scale corruption by the installed PPP regime has been disclosed at a time when Guyanese are suffering from a COVID-19 pandemic, the worst flood disaster in our history, high and rising cost of living, low wages and salaries paid to public servants and blatant discrimination by the installed PPP regime in the manner it manages the affairs of the state.”

He is now demanding a full explanation of the vaccine racket from President Irfaan Ali. The article was first brought to light by APNU+AFC Member of Parliament, Roysdale Forde during the debate on the motion to remove the Chairman of the Public Accounts Committee (PAC), David Patterson.

Forde, a Senior Counsel, told the House on Tuesday that the PPP/C was attempting to evade oversight in an attempt to cover up its corrupted practices.

The Norwegian newspaper had quoted the the Vice President Bharrat Jagdeo pointing out that while the Russians were selling the vaccine for approximately 10 dollars per dose, internationally, Guyana had paid double the price.

“The first set of Sputnik vaccines cost 20 dollars per dose. We shopped around, in the United States, but were unable to obtain any vaccine, just as in Europe. We tried via Covax, to no avail. Then, a company associated with the Prince of Dubai came here”, the newspaper quoted Vice President Bharrat Jagdeo.

The sellers stated that they had a limited vaccine inventory, according to the Vice President.

“At the time, we would probably have paid whatever it took just to obtain vaccines for our people, because we were unable to obtain them from anyone else”, it further quoted Jagdeo.

“Initially, Guyana purchased 200,000 doses. What was the name of the company affiliated with the Sheik that sold the vaccine? “I do not know the exact name of the company, but I know they supplied Africa and some other countries”, says the Vice President.”

Wed Jun 16 , 2021
Support Village Voice News With a Donation of Your Choice. A fire late Tuesday afternoon destroyed the inside of Church’s Chicken building located at Rosignal. According to reports the fiee started around 5:30PM. Swift efforts from the Guyana Fire Service made it possible for the building to be saved, only causing damage to the interior of the building. An eyewitness […]