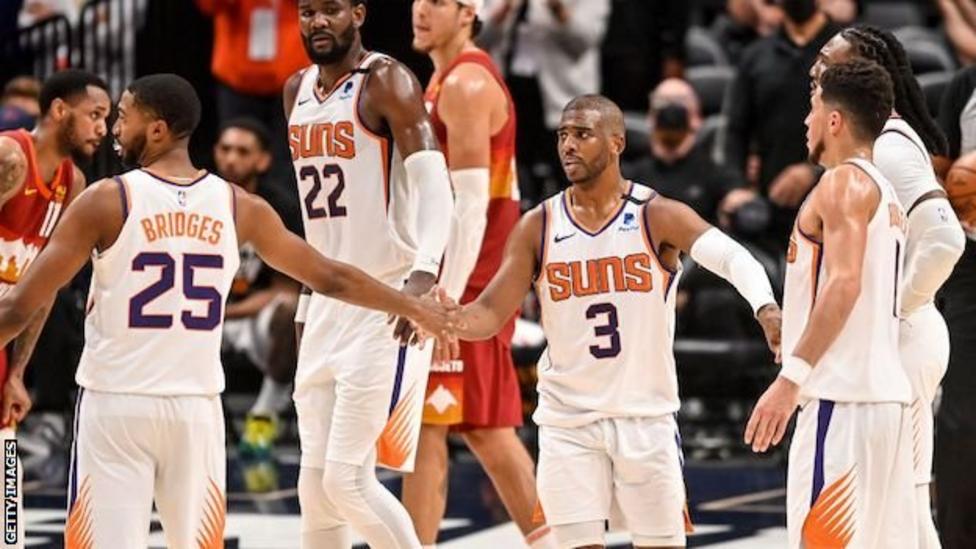 (BBC Sport) The Phoenix Suns reached the Western Conference finals for the first time in 11 years with a 125-118 win over the Denver Nuggets – sweeping their best-of-seven series 4-0.

Chris Paul top-scored for the Suns with 37 points while team-mate Devin Booker added 34 points and 11 rebounds.

The game was marred by the ejection of NBA Most Valuable Player (MVP) Nikola Jokic late in the third quarter.

He recklessly swiped for the ball but struck Cameron Payne in the face.

Serbian Jokic and the Suns’ Booker had to be separated by players, coaches and officials after squaring up to each other in the aftermath.

Jokic finished with 22 points and 11 rebounds as team-mate Will Barton led the Nuggets on 25 points.

The Suns, who last reached the conference finals in the 2009-10 season, will play either the Utah Jazz or the Los Angeles Clippers. The Jazz currently lead that semi-final series 2-1.

Elsewhere on Sunday night, the Milwaukee Bucks levelled their Eastern Conference semi-final series against the Brooklyn Nets at 2-2 with a 107-96 win.

Giannis Antetokounmpo made 34 points and 12 rebounds for the Bucks, matching his play-off high score.

The Nets lost All-Star guard Kyrie Irving to a sprained ankle after he awkwardly stood on Antetokounmpo’s foot on a lay-up.

Game five of the series is on Tuesday in Brooklyn

Mon Jun 14 , 2021
Support Village Voice News With a Donation of Your Choice. (BBC Sport) Hosts Brazil began the defence of their Copa America title with a comfortable victory over a Covid-affected Venezuela in the tournament’s opening match. Talisman Neymar scored one and assisted another, adding a second for Tite’s side with a second-half penalty before setting up Gabriel Barbosa late on. Paris […]