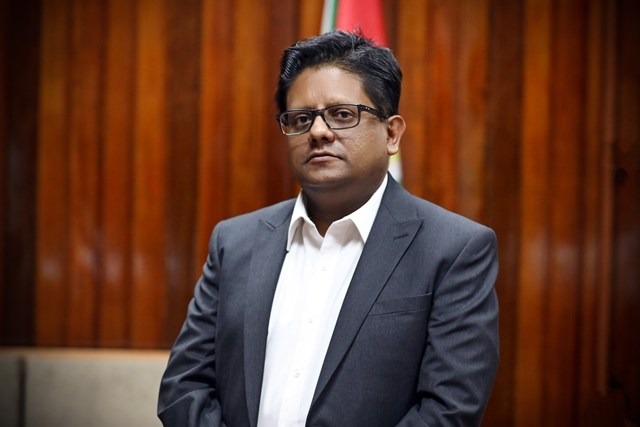 The APNU+AFC lost a motion on Thursday to have the Government establish a Multi-Agency Taskforce to guide its decisions on the establishment and placement of shore bases across Guyana.

Opposition Member of Parliament (MP) David Patterson had moved the motion which he stated was a simple one in the interest of transparency, protection of the environment, economic diversity and adherence to zoning and land-use policies.

Patterson’s motion urged the National Assembly to advise the Government to establish a Multi-Agency Taskforce to prepare a Land Use Policy, specifically for the location of the Oil and Gas Sector.

It also proposed that the Government advise the Taskforce that it is the preference of this National Assembly for future onshore bases to be in the counties of Berbice and Essequibo to ensure parity in the development of the oil and gas industry and the equal-able development across Guyana for the benefit of all citizens.

Regarding ExxonMobil, the motion requested that the Government advise ExxonMobil and all other oil and gas operators that they should suspend their Request for Information (RFI) until the Taskforce completes its Report on the Land Use Policy within 6 months.

It was also proposed that future shore bases shall be State-owned but leased to private operators so as to ensure the maximum benefit for all Guyanese.

In his presentation, Patterson told the House that, in mid-2015, the then Ministries of Public Infrastructure and Natural Resources commissioned a screening study of new onshore bases and ports and a report was produced in 2016.

It was the said report that helped to guide the former Government on its current position. Patterson said locations in Essequibo, Berbice and Demerara were examined and Berbice was ranked as the best option.

Apart from the APNU+AFC’s position that the Demerara River, is already the busiest river in the country, Patterson said that to place the shore base at Berbice would allow for the diversification of the economy.

Sarabo-Halley put forward that the decisions being made were not for the health and well-being of citizens but for the benefit of a few. She urged the House: “So, it must be taken out of the hands of the few and put into the hands of the Guyanese population and a decision has to be made in the best interest of all Guyana.”

Ramjattan, on the other hand, said that the PPP/C’s prime motive appears to him to be profit over people.

In counter-arguments, Minister of Public Works, Juan Edghill told the House that while Patterson’s motion may seem to come with “noble intention” it lacks proper vision. He said that the PPP/C’s vision and policy direction doesn’t only place emphasis on the importance of one sector but considers how other sectors can either benefit or be impacted by a project

“This approach about ensuring that there are shore base facilities in Berbice or in Essequibo as to say if there are not shore bases there, Guyana will not develop is a fallacy,” Edghill said. He also stated that Berbice as a deepwater harbour was not an idea birthed by the APNU+AFC but under the PPP/C.

Dr. Singh said that the APNU+AFC has a history of mismanagement and does not realise that a Land Use Policy, as proposed, will do the country no good.

“The author of this notion is of the view that a national Land Use Policy will somehow dictate which areas will be used for what and whether [it will be] the Berbice River or the Demerara River…that, Sir, reflects a fundamental lack of understanding of what a Land Use Policy really will be,” Dr. Singh said.

Meanwhile, Indar said that while Patterson has put forward that a shore base in Berbice would allow for diversification, the APNU+AFC’s track record has not shown that they are knowledgeable about how to achieve diversity.

On the other hand, Bharrat said that the Opposition was utilizing the forum of the National Assembly to gain cheap political points as opposed to focusing on national development. He said: “The Opposition needs to be serious about this and let us come to the table and discuss how we move forward.”

Ultimately, put to a vote by the Speaker at almost midnight, 31 MPs voted in favour while 33 voted against.

Mon Jun 14 , 2021
Support Village Voice News With a Donation of Your Choice. Twenty-seven-year-old Alicia Martin – a Guyanese dancer, singer and song writer – has launched her first book on sex, lifestyle practices and purity. Titled ‘SLAY in PURITY,’ the book, which was officially launched on Saturday, is based on Martin’s life experiences. “The inspiration behind this book is rooted in my […]